A third post for the day, sorry if you're sick of me!

My sister Mary sent me a text telling me that she had a promo code for Seven Slings, which is a slightly freaky website (why do all the "moms" look like sleazy anorexic high schoolers at a Glamour Shots shoot?) but which carries (hopefully awesome) baby carriers.
And since I'm going to have two babies and only two arms, I've been looking at lots of slings, carriers and Mobys.
But since they're expensive I've also been putting off buying one... or two.
But today I bought two slings, one for me and one for Travis (hopefully he won't think his is too girly to wear) and they were only 12 dollars each, including shipping!
So I thought I would share the promo code for any of you ladies out there who are planning to wear your babies after they're born, but are too cheap (like me) to buy an actual sling.
Now's your chance!

The promo code is IDAHO.
Yep.
I think you're probably supposed to be living in Idaho to use it.
But since they gave me the discount and I live in Utah, you're probably fine where ever you live. 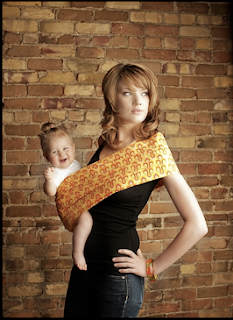 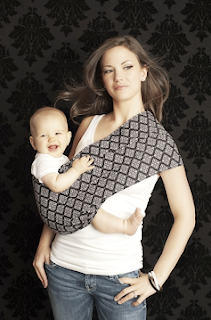 Seriously. This women are freaky.
But cheap slings are nice.
Go here to redeem the coupon.

I am pretty sure that you have to wear jeans and a tank top in order to use the sling. Are you willing to do this?

They aren't real moms. They are models who have never birthed babies before.

you could use both slings at the same time and you know...be double-holstered. or whatever they say for things like guns and stuff...

Hey, here's a tip: I love, love, love the Moby wraps ... but they are way over priced! I went to Walmart and bought 5 yards of knit fabric on their $2 table = $10, cut that in half lengthwise and got TWO wraps! Because it's knit fabric, there's no need to hem the cut sides. They have the instructions for how to use the wraps on their website, so it was a killer deal. And, I love how secure my Maryanne was in them ... held tightly against my torso at all times. You've probably seen it, but they also have instructions for wearing two babies. I highly, highly recommend going that route too ... even with the slings.