The boys both have the habit of slowly opening one eye while keeping the other eye scrunched up shut.
While doing this they often make a snarling face and sound.
Mostly Grey does it.

When the boys do this Travis always tells them that they are pirates and sometimes sings "A Pirates Life for Me" to them, and in response they wink and snarl like pirates.

After eating, Grey usually has milk covering the lower half of his face, and he sits and winks and snarls and looks around like a pirate.
So we started to call him Milkbeard.
Because Milkbeard is a very good pirate baby nickname.

Travis said, "What is Micah's pirate name?"
But the truth is, Micah's head is much smaller and his arms and fingers are longer and skinnier, and he opens his eyes up SO wide... that I think he looks less like a pirate and more like a little monkey that sits on a pirate's shoulder.

Which Travis thinks is mean of me to say.
But I like to call him "Little Monkey Micah." 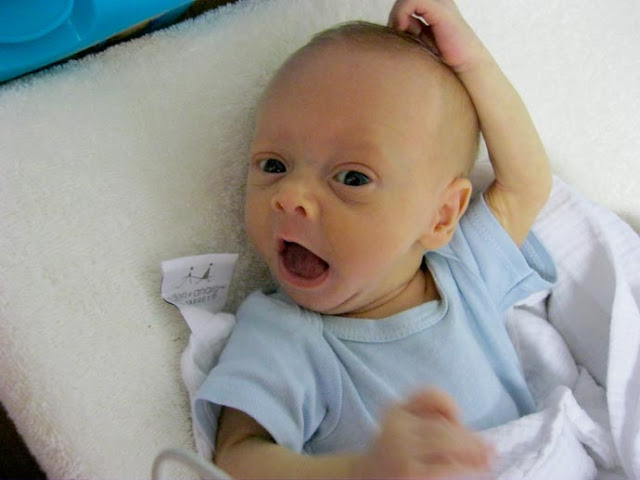 So.
If you were wondering, those are currently the very kind nicknames that we call our children by.
Little Monkey Micah and Milkbeard the Pirate.

And if you are wondering why there isn't a picture of Grey looking like Milkbeard, here's why: usually if his face is covered in milk then he is being burped in the midst of breast feeding - and I'm not super good at taking pictures whilst breast feeding.

And if Travis took the pictures then there is a chance my boobs would end up in the background of the photos.... which I am opposed to.

But really, the picture of Micah is awesome on it's own. Right?
.
Posted by Becky Pitcher at 7:07 PM

Adorable photo of Micah acting like a monkey. You two are too funny!

Cute, funny nicknames! Travis cracks me up. You two will have lots of fun in the future with your two boys and both of your sense of humor.

awesome does not even begin to cover it!

Very cute! He does look like a monkey, but I like monkeys so that's ok. And it's probably better to not post pictures of your boobs on the internet, although I'd love to see the pirate face.

That is just the cutest!! They have grown so much already!

yes, so awesome! so so cute.