I have questions to answer!
But before I begin, here is a very cute baby with a little heart-shaped mouth: 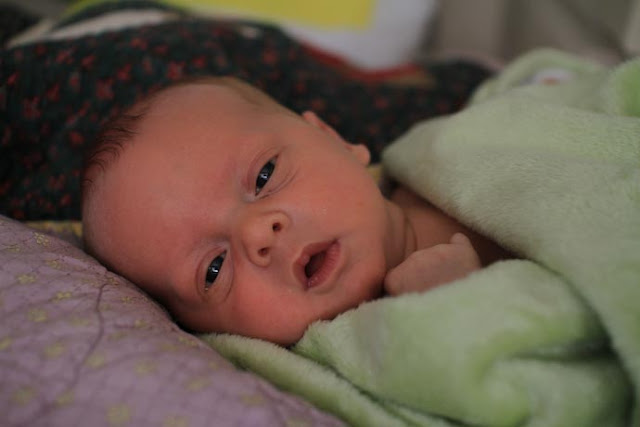 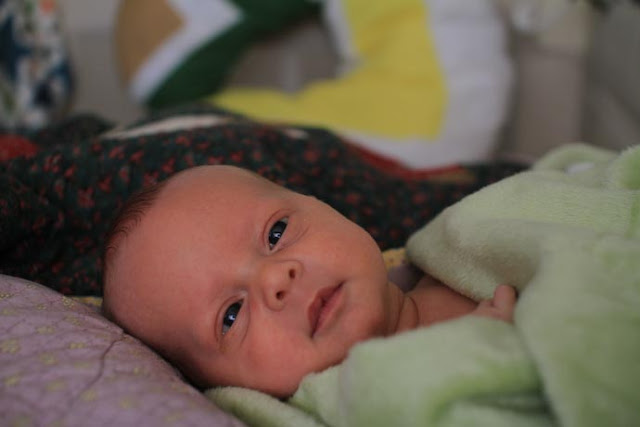 There were actually quite a few questions, and I answered them all here except I didn't talk about breastfeeding or how we chose the boys' names, and will dedicate entire posts to each of those questions.
Tomorrow maybe?


Okay, now on to your questions!

Did you plan your pregnancy? If so, why?
We kind of planned the pregnancy. Really, we had been talking about going off birth control for a few months, since it made me feel sick AND we wanted a baby (but weren't sure if we were ready) and then when we went to Africa we were taking malaria pills - which makes birth control ineffective.  And since birth control made me feel sick, and wouldn't be working anyway I stopped taking it in Africa...
and when we got home we decided just to stay off birth control.
But we weren't really planning to get pregnant, or not get pregnant. We figured we'd just see what happened.
And what happened was: I immediately became pregnant.


Someone kind of asked this, so I'm taking it as a question and talking about it: Did you have a feeling you'd have twins?
Yup. I did.
Constantly. The first four months of my pregnancy I was always asking the doctors and midwives if there was a chance I was pregnant with twins. I was always teasing Travis that maybe I was pregnant with twins.  I kept having dreams that I was pregnant with twins.
Aaaand, when I would lie in bed and daydream about things like taking my baby to the park I would often picture myself with twins and then think "Snap out of it! You're jinxing yourself!"
Before I was pregnant, I always thought twins would be really fun, and wanted twin girls as my last children (in a line up of about 6 kids?)
I guess twin boys at the beginning of my kid-line-up is pretty close (but no cigar).

How was it feeling two babies kick at once? Did it make you stop what you were doing?
Hells yes. They are the strongest little kickers in the world, and they wouldn't just kick me, they'd also kick each other,  and then upset each other and then start kickboxing or something. It was pretty crazy.
In fact, here's a pretty crazy video of it happening:

Belly Dance from travispitcher on Vimeo.

I don't know what it's like feeling only one baby, so I can't compare - but I can say that once at lamaze the instructor said that we should drink juice and lie down and make sure our baby kicks 6-10 times in an hour after being stimulated by sugar.
And I thought to myself "You have to stimulate your baby with sugar to feel it kick 10 times an hour? If my babies don't move 10 times an hour, I really start to worry."

Do you plan on having more children one day?
Yep. Travis and I are both from medium-sized families (at least in the mormon community they're medium sized), and we each have four siblings. Travis usually says four kids would be perfect, and I usually think six kids would be perfect, but he'll probably win, because six kids is a lot.
But yes, at least two more kids are in our future if everything goes as planned (though it rarely does. Exhibit A: twins).
We think one more boy and a girl would be ideal, but who knows what's in store? Family is really important to both of us though, and we plan on raising Grey and Micah to be awesome older brothers to whoever comes our way.

Do you cloth diaper?
Not yet.
We're planning on cloth diapering, but so far the twins have both been under 8 pounds (but Grey is over the mark as of Sunday!) and babies don't normally fit in cloth diapers when they're so small.
So now we're just waiting for our tax return, since cloth diapers are expensive.
But regular diapers are pretty expensive when you go through 30 a day some days.
But if you're interested in reading about cloth diapering twins then check out Brittany's posts on the matter {here}.


What town in Minnesota did you grow up in?
Buffalo. A town of about 15,000 people in the very middle of state.


Do you co-sleep?
Honestly... no. We want to. We've tried to.
We have a co-sleeper next to our bed, which is awesome. And for the first few days they slept in it.
The problem is, these babies are SO noisy in their sleep. They're practically unconscious and won't wake if you flip on the lights and start listening to music, but they make so much noise that I lie awake listening to them all night.
Micah grunts and growls, Urrrrrrgh. Uuuuuh. Snort snort snort. UGH! Urrrrrrh.
And Grey hums and squeaks, Ehh, mmmm mmmm meh meh meh. Ahhh!


Actually, it's pretty stinking adorable, except that I cannot sleep while I can hear them. So we've been putting them in the room next to us in their own crib, and I only wake up when they wake up.
But luckily, even in the other room I can hear them all too well, and they don't really even need to yell before I'm in there getting ready to nurse.
All they have to do is grunt and squeak a bit louder than usual.
Travis said, "I guess we need a baby monitor then," which is ridiculous, because then I'd lie in bed listening to that all night, but it'd be worse because I'd have to get up to check on them instead of just reaching over.
Luckily they never really sleep for more than two hours at a time, so they're still being really regularly checked on.
And Micah kind of co-sleeps with us, since in the last three days he's decided that he will only sleep if he's being held.
So that's going on now. Yay.

Are you awesome?
Yes.
Okay. Nobody asked that.
But only, I assume, because you all already know the answer.

This was really fun for me. I will probably keep doing this, so keep leaving your questions in the comments! It's fun to see what you guys want to know about.

Now I have a question for you:
Will you click below and give us a vote?

"Are you awesome?" Definite YES! Thanks for the cloth diaper shout out. It's fabulous and you'll love it once you start.

And I too knew I was having twins before we found out. We had our first ultra sound at 12 weeks though, but by that time I was already showing. Ridiculous. Absolutely ridiculous.

I don't know if you have ever seen this blog but i just moved out to new york and stumbled on it. It reminded me of you and thought i would share this post about how to tell her identical twin boys apart.

Love your blog, every time you post new pictures me or my sister sends a text and says "new pictures are up!" we love your boys. They are adorable.

I love reading posts like this, getting an inside peek! And i just love your belly dance video, the first time i watched it i got tears, now when i watch it, i smile and cannot wait to feel my boys in action just like that! Hope i can catch it on film also!!

I really recommend looking into a cloth diaper service. It's what we use with our twins, and it's amazing. Cheaper than disposables, easier than washing them yourself, and you'd be shocked- they're pretty much everywhere. Just... a bit anachronistic. Also, while all-in-one cloth diapers might be hard to put on such little babies, regular pre-folds are a cinch. You just... fold them. And there you go.

Talk about a small world. After I asked you where you grew up, I sent the link for your blog to my brother (who happens to now live in Canada). Lo and behold, you guys graduated together. How cool is that?

I can't remember exactly how I found your blog, it was thru a blog thru another blog, etc.