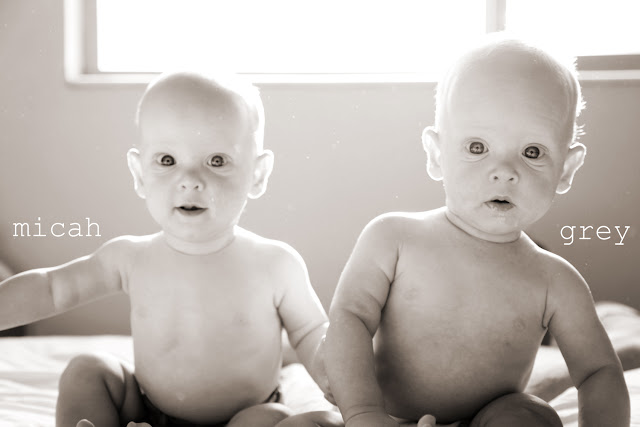 Half a year old.
That's how old my children are. Well, at least, that's how old they were yesterday.
But yesterday was Sunday and I didn't have the camera on me to take pictures.
Today I tried to take pictures and was quite determined to get pictures of them sitting, but you know... it didn't quite work. Apparently it's harder to sit on the bed than the floor...
But we're going to try again this afternoon, so check back tomorrow or Wednesday. 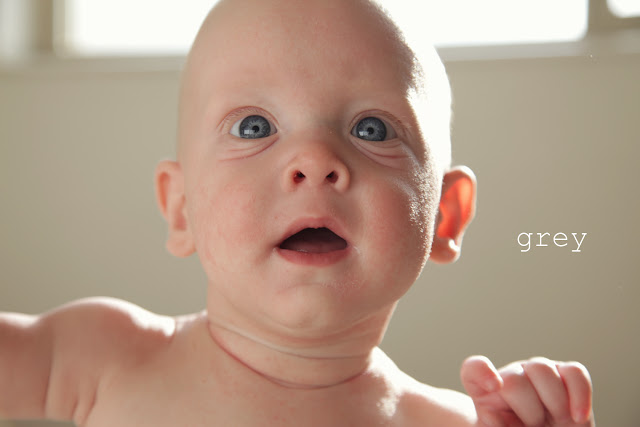 At six months old, my children are becoming children. Not infants. But children who play, who laugh at puppies and ducks, who try to take toys from each other, who lean in to give me kisses and love to read stories.
And who have slept through the night four nights in a row! (We're talking 11 hours... more on this later. Tomorrow?) 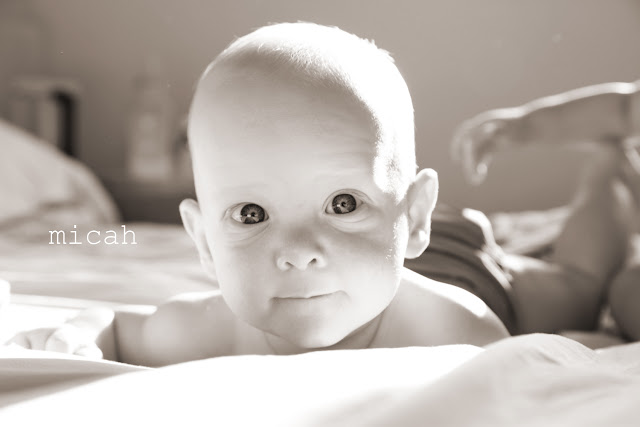 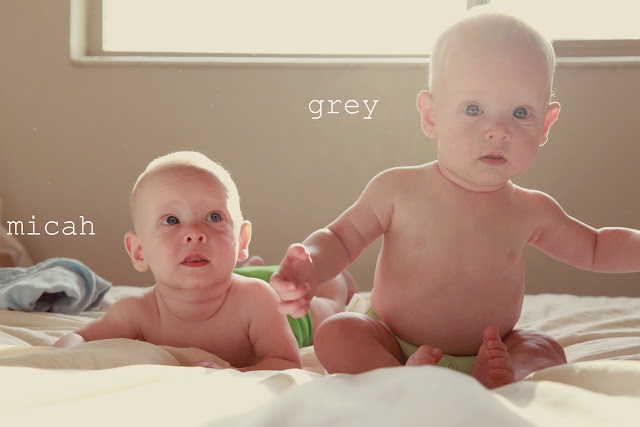 These boys love kissing. They lean in and plant big, slobbery, open mouthed kisses on my cheek, mouth, nose... it's adorable. I love it.
They love to kiss their daddy and their aunt Mary, too. I may have even started crying a teeny bit, when I saw Micah lean in and kiss his brother on the forehead. Especially when Grey turned his face to Micah and just grinned at him. They love each other! They love each other! 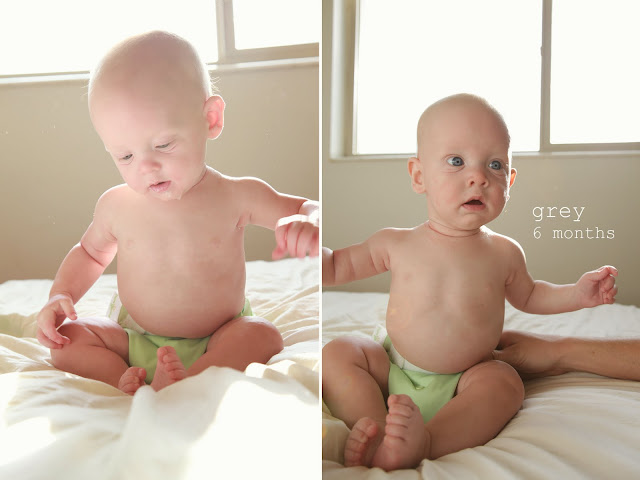 And they're starting to love other people, too! It was so sweet when we were at Travis' parents last Sunday, and I took Micah from his Grandma, and he reached out his arms and leaned back to her.  They recognize their family and they love them and want them! It's so sweet! 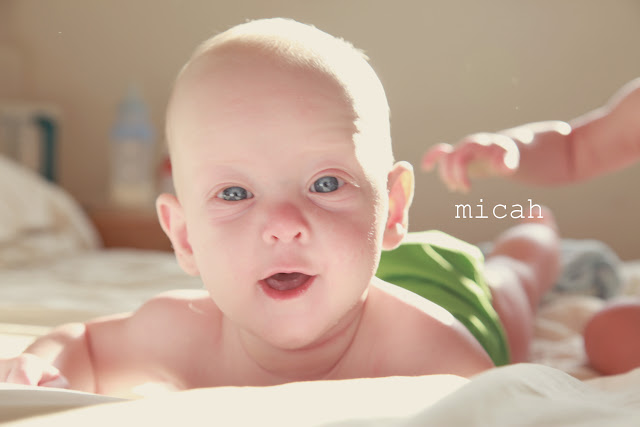 They've also both learned to blow raspberries, and they think it's hilarious. The day Grey learned it, he spent all day with big red cheeks and spit down his front because he wouldn't stop doing it.
The next day, after watching his brother blow raspberries all day, Micah starting trying to do it. But he didn't quite know how to do it, and kept his mouth in a wide "Eeee" shape.
But a day later he had it figured out, and then the boys were both doing it constantly. 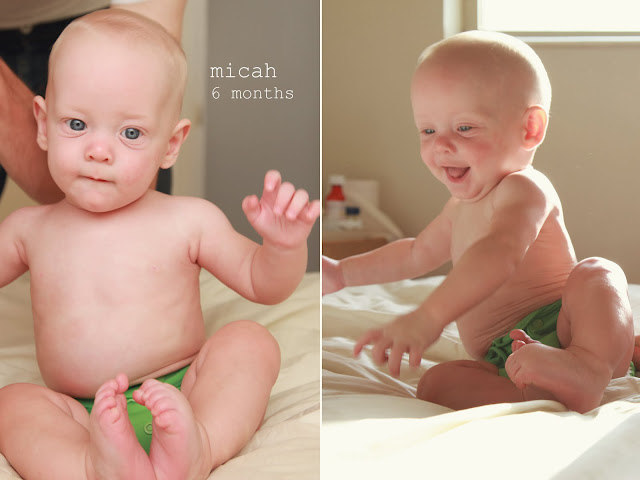 They want to crawl soooo badly. They get up on their hands and knees and rock back and forth, but I don't think they've figured out that they have the strength to pick up their hands and move forward. So they're still just army crawling. They alternate between pulling themselves forward by the elbows and shooting themselves forward by pulling their knees under their stomachs and then straightening them out quickly. 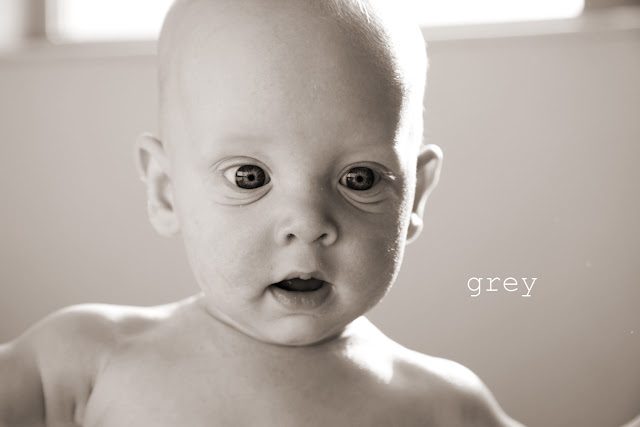 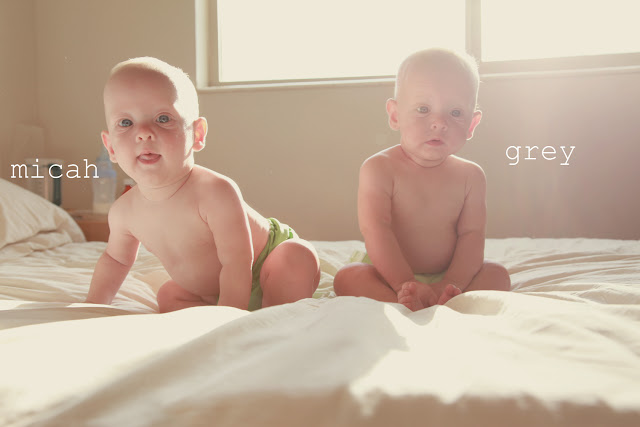 Just yesterday, on their half-birthday, Grey learned to sit. Really sit, I mean. Before yesterday they could both sit with a bit of help, or for a few seconds at a time, before toppling forward. But suddenly, yesterday, I sat Grey up to practice sitting, and he didn't need me.
He would sit for several minutes at a time. Micah can still only sit for maybe 20 seconds at a time, but I think it's because he's too easily distracted. He wants things, whether it's the bottle Grey is holding or the pacifier on the floor, he knows the easiest way to get it is on his belly.
So he flops himself forward.
But at least it seems intentional. Perhaps if he intended to sit, then he could... ? 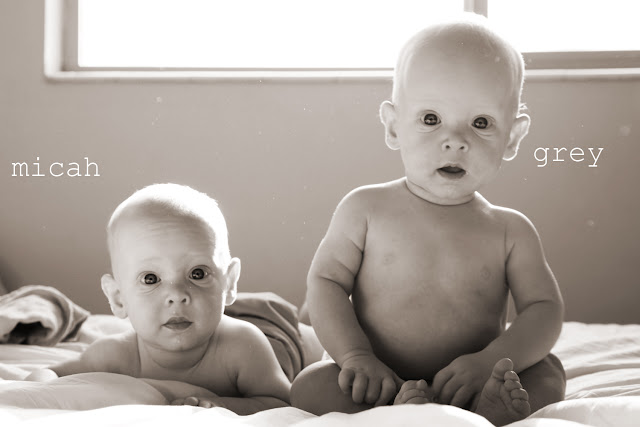 They love to watch tv.  No. I don't let them watch tv, but now if I am watching something on my computer or television, they are fascinated. They also are a teeny bit obsessed with my phone. They want it. In their hands or in their mouths, but NOT in my hands.
I've actually taken to using it as a distraction, like when I need one baby to calm down for a minute so I can help his brother. I turn on a video of the boys that I've recorded on the phone.
They LOVE to watch the videos of themselves, but I wonder if they really know that it's a video of them.
Maybe they just like hearing themselves (on the video) laughing and baby-talking. 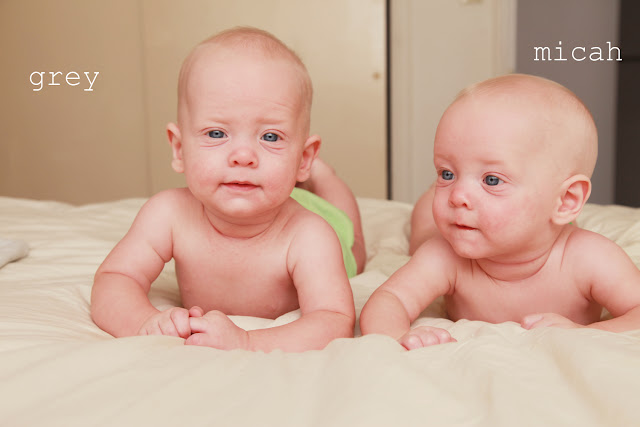 I know every mom says this, but I just love this stage.  Every stage that they've been in so far is more fun.  They are constantly laughing and grinning and playing with each other and with me.
And dang! I mean, seriously. These boys are CUTE. 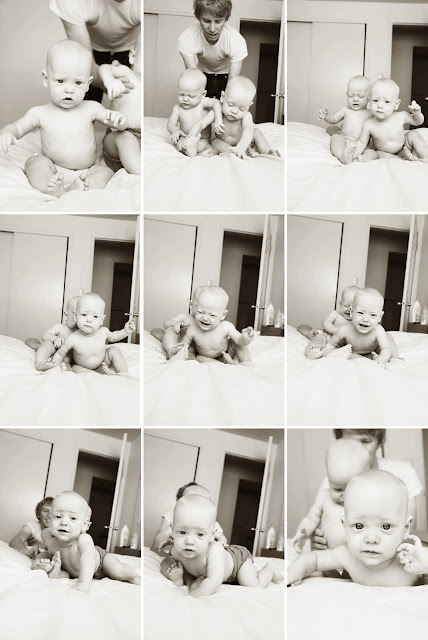 And this is what it looked like trying to get them to sit up...

Posted by Becky Pitcher at 9:59 AM

So cute!
Christian is my "too easily distracted" one. He wants to grab everything, so instead of sitting, he flings forward to he can get to stuff.
Camden can do about 20 seconds or so...it will be nice when I can just plop them down and have them sit. Hopefully soon!

Your boys are sooo cute!!!!

Adorable. I can't believe they're 6 months already! We need to get together soon. Like really soon.

Oh no! Micah looks like Grey in most of the pictures which is frustrating to me. I like to be able to tell them apart, but in some pictures it is impossible. I can't believe how big they look and how fast they change. No fair! Thanks for skyping for awhile last night. Let's do that again today so Grandpa can see how big they are getting. Way to go babies on sleeping and letting mom and dad sleep!

Just when I think there can't be any cuter pictures, you take even cuter ones! I can't believe you got such a good shot with the light behind them. I hope I can get some baby kisses from them when I come.

Hooray for sleeping through the night! :D

What a couple of cuties.

Becky, it almost makes me want to go west instead of east for vacation. They are getting so big and these photos are so cute. You can tell they are really getting personalities with their goofy faces and wonderful smiles. Get some kisses for me too. Love You. Grandma

Those are some wonderful, amazing, beautiful photos! I really love the action shots, and I love hearing about the action behind the shots. How exciting that they are developing all these new skills!

And I am extraordinarily happy to hear about the sleeping through the night. Since Miles and Elliott started doing it, there has been no turning back, so I am very optimistic for you and your sleep.

Congratulations on six-month-olds and on restful nights!

These boys are way too cute! Happy 6 months!