Clearly I am a fancy person.
And so is Travis.

Here was the order of business yesterday:
Early morning, Travis and his crew met up on BYU campus to figure out the logistics of filming TEDxBYU. What's that? You're wondering about how Travis filmed and edited TEDxBYU while ALSO SPEAKING IN IT? Yeah, he's just pretty amazing like that.
I dropped of the boys at Grandma's house and then went to buy some new jeans so I could look impressive and stylish while meeting hosts of fancy people.
Then I met up with Travis and watched the TED Talks. Oh, and I was in the front row. Reserved seating. You know, because I have connections. 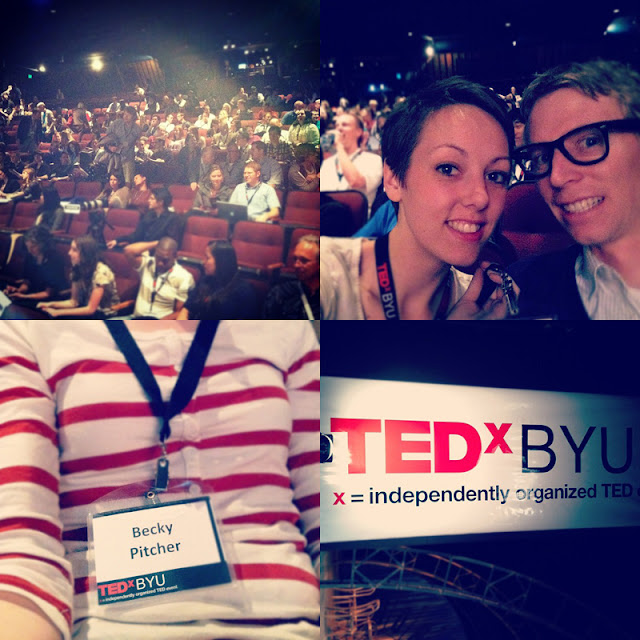 The talks started off pretty amazing, and I cried through a whole bunch of them, and was inspired by almost all of them. Travis and his crew snuck around in all black filming (like below) and I sat with and whispered with Jessamyn (the MC) because I love her. 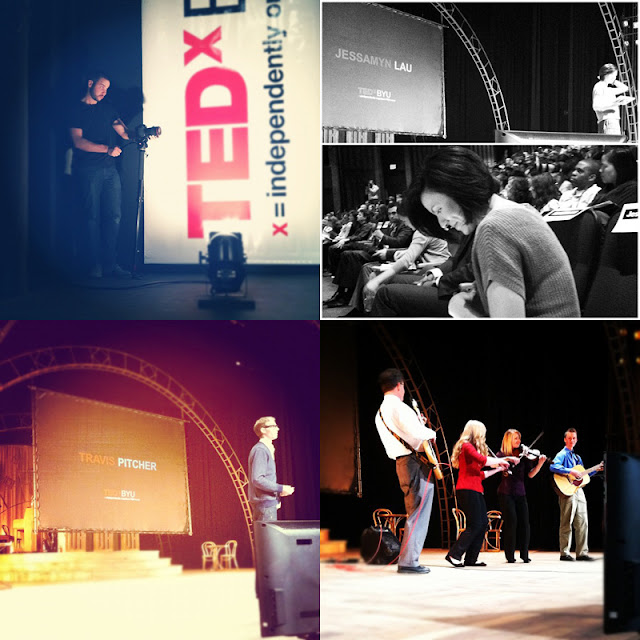 Then Travis spoke and suddenly everything was broken, so his film didn't play and he had to wing it. But he still did AMAZING.
Afterward, several people said to me "You're Travis Pitcher the filmmaker's wife? He was amazing. His talk was so wonderful, so deep and sincere!"
Holla.
Yeah he was.
Yeah it was.

Also, at one point, I was saying to Joe (Travis' business partner, pictured with us below): "We need to figure out a way for us to buy a house soon!"
And Joe said, "Oh, wahwah! Because my husband owns his own successful company his first year out of film school! I need more!"
Um. Joseph. I love you.
Good point. Travis is the best ever. #moreproof 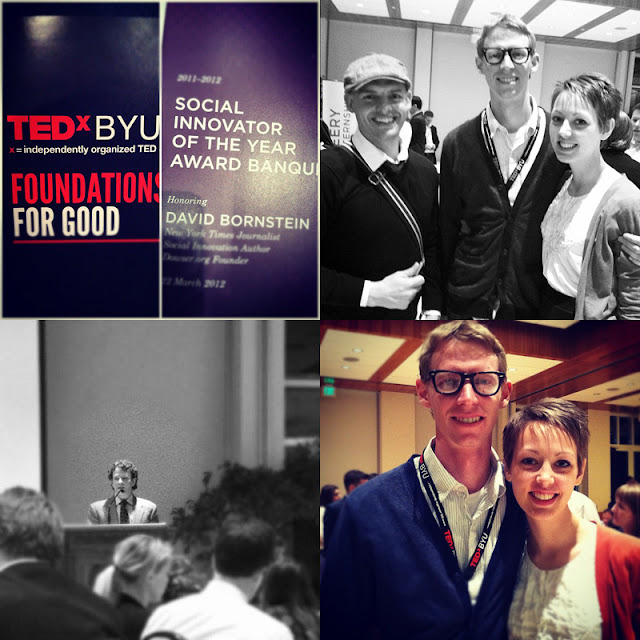 Then we went to a fancy banquet so that the Ballard Center and the PEERY Foundation could give awards to David Bornstein. And everyone kept saying "Oh my goodness, how are you?! The last time I saw you, you had long hair!"
Yeah, and I was ginormously pregnant with twins. Since last year this event was about two weeks before I had the babies. Remember that?
There are many differences between me then and me now.

We got to talk for a while with David Bornstein which was super cool, since he's like the king of social change. He said things to us like "Please call me next time you're in New York!" and "You guys are great, how lucky your boys are to have you!"

And I know it's silly, but I loved having people like Jason Fairbourne and Dave Peery be like "Oh, hey Becky. What's up? Where are the boys tonight, you got a sitter?"
Yeah Because we're pals. What of it? Travis is cool and so am I. People know me.
Whatevs.

(Stop judging me, I was like peeing my pants the whole day and evening. I like to be cool. Can you blame me?)

Sounds like a great night. I love social situations where you feel like a million bucks. Good to have a night out. Post some video when it comes out! Yeah? So we can see the presentation too. Or tell Travis to on his blog. Love you