Every few months I start regretting my hair. If it's long, then I want to chop it. If it's short, I want to grow it out.

I want to grow my hair out.

This is a mistake. I know it's a mistake.
After I chopped back down to a pixie cut the last time, I had several women say to me, "I'm so glad you decided to cut your hair off again, it looks SO much better." One woman even said, "I couldn't figure out why you were even trying to grow it out, since it's obviously way better short."

I know it looks better. And I don't have to style it every day, and more importantly - I can continue to shower only once weekly.
I found a picture of myself from last Valentine's Day. I looked so pretty! My hair was so long! It was long enough to curl!
Then, I continued scrolling down through my pictures and I saw another one of me - on a different day that week. And I remembered.
I don't usually curl my hair and look pretty. I usually look like a terrifying zombie.
For some reason, having a pixie cut makes my terrifying zombie-vibe a little less pronounced. 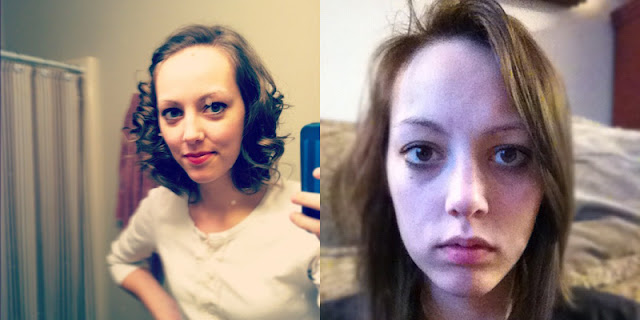 Those are the same people, you guys. And that person is me. Those pictures are only like a day apart.
The picture on the left took HOURS of prep-time. The picture on the right took exactly how much prep-time I want to put into getting ready in the morning: none. Obviously.

I remember now, long hair makes me look baldy and horse-faced. I remember why I have short hair.
I look good with short hair 90% of the time, with little to no effort involved. The rest of the time, I look like a poofy-haired young Justin Bieber, but that's a 10% I'm willing to take.

I'm trying to talk myself into it. I'm rereading {this blog post} that I wrote last year about how my hair SUCKS when it's long. But it's not totally convincing me.  I just look so awesome in the left-hand picture.
Maybe I should start wearing makeup on a daily basis, since I'm definitely wearing make up in that picture.
I just put the boys down for a nap, and was going to use this precious time to make a meatloaf for dinner - but I'm starting to feel like I should use this time to experiment with the make-up that my Santa-Mom put in my stocking.

Yeah. That's a super good use of my time. That's probably what's about to happen.
Shhh, don't tell Travis.
*Winkyface*

Posted by Becky Pitcher at 9:26 AM

Email ThisBlogThis!Share to TwitterShare to FacebookShare to Pinterest
Labels: hair, self

You look AMAZING with a pixie cut. You're lucky you can pull it off so well!

You look awesome with short hair, but I think you'd look good with long hair that was style differently!

I do the same thing! I see women with their beautiful curly locks and think "I bet I would look like a goddess if I grew my hair back out." But no. I do not look like that. I look limp and greasy and awful.

Its funny because then you have these great family pictures below with short hair and you look awesome! I always like having long hair but unless I'm going to church or out with my husband its in a pony tail which makes me feel super slob. I think its a battle for ll of us.

you look horrifying.... also I love you with long hair.... remember your engagment photos oh such a beauty :)

Don't listen to Mary she has that Froelich mentality that only boys have short hair. You look lovely with short or long hair. I really don't care how you wear your hair. It's fun to have different hairstyles and try new things. Life is to short to always look the same. haha

that second picture is a fluke. You look great with long hair