There comes a time every year, when I want nothing more than to sit on my couch and knit while Jim Dale reads Harry Potter books to me, and I drink warm peppermint tea.
Sometimes I like to sort through piles of yarn and patterns for children's hats while Bind Crosby sings "White Christmas."

And that time of year usually hits in July.
This year, actually, it hit me in June. Okay, fine. I haven't been listening to Christmas music much yet, but I have caught myself humming Christmas tunes several times this week.
This next week, you know, marks the half-way point between Christmases.
I feel like it was just Christmas! Which means that it is, once again, practically Christmas.

I know that the reason my crafting-to-Harry-tales urge hit me early this year is because of that quilt I made a few weeks ago. Once I got behind the sewing machine and transfered all the Harry Potter audiobooks to my phone, there was no turning back.
It's that time of year. 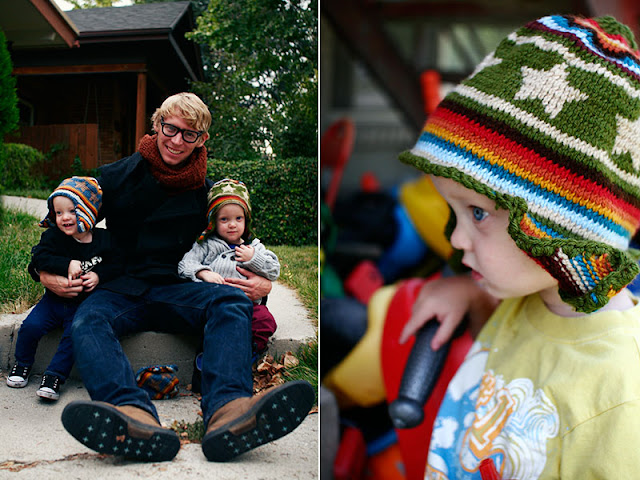 (Here are the hats I made the boys last summer, Aren't they very Harry?)

The reasons that I have this irresistible, seasonally-confusing desire is clear to me.

Reason 1: I first learned to knit in the heat of the summer while listening to Harry Potter books with my exceptionally cute and nerdy roommates. While Jim Dale described the creepy feeling dementors cause or Harry's burgeoning love for Ginny, my bestie Lana would peer Madame Pince-like over my shoulder, occasionally shouting "Knit, Purl, Becky! Knit, PURL!" and grab my hands to stop me from knitting incorrectly.
This ingrained in my mind, not only the ability to knit and purl, but also the fact that knitting should be done in the summer with Harry Potter.
(What? You and your freshman roommates didn't sit around in just underwear knitting instead of doing boring things like dating or partying?)

Reason 2: It's actually cold in my house in the summer because of air conditioning and warm during the winter because of heaters. This confuses my brain and requires me to eat oatmeal and drink tea in the mornings and evenings. It also causes me to desire to make warm, comfortable things like scarves and mittens.

Reason 3: In my desire to be Mrs. Weasley, I feel like I should knit everyone things. I want to knit them sweaters, but lack of magic and quickly growing children, and cozy hand-knitted-like sweaters for $10 at H&M make that idea seem silly.  So I knit hats, beginning in the summer to complete them all by fall.

and Reason 4: As everyone knows, Harry Potter's birthday is at the end of July, and my friends and I hold a party every year. Nothing gets me quite in the spirit to bubble hot butterbeer over the stove in 100 degree weather and fork out 29 dollars for an ounce of golden syrup like listening to descriptions of Hogwarts food and Mrs. Weasley's hearty, well-laden table. 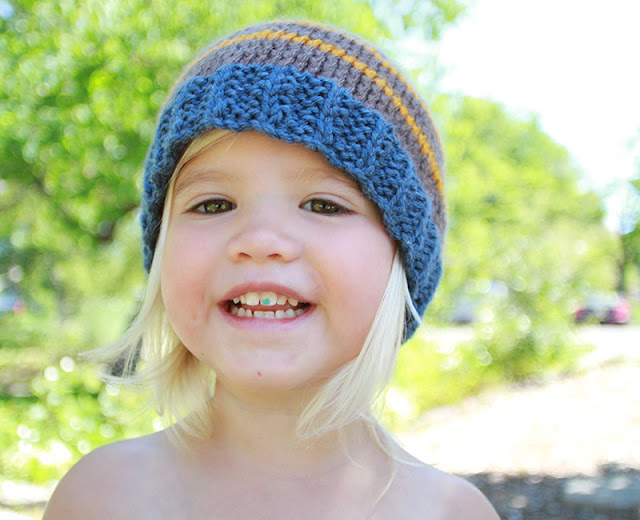 My first knitted item of the year was this hat, but since I didn't use a real pattern, it didn't fit my kids properly. Luckily it fitted this green-toothed cutie perfectly. In the summer, if you're forced to wear a knitted hat, you should also be naked - so as to avoid being overheated.

So, I invite anyone reading to join me in making wonderful knitted things. And if you haven't heard the Harry Potter books on tape THEN SHAME ON YOU.
They will change your life in many ways. For one thing, you will probably begin to have frequent dreams narrated by Jim Dale.
This is an exciting and spectacular nighttime adventure.

And here are two pictures: One of my bestie Lana (who taught me to knit) and I getting ready to head out on to the Quidditch pitch and one is from last year's Harry Potter birthday party, when I created the best-ever invites and had them delivered by owl. 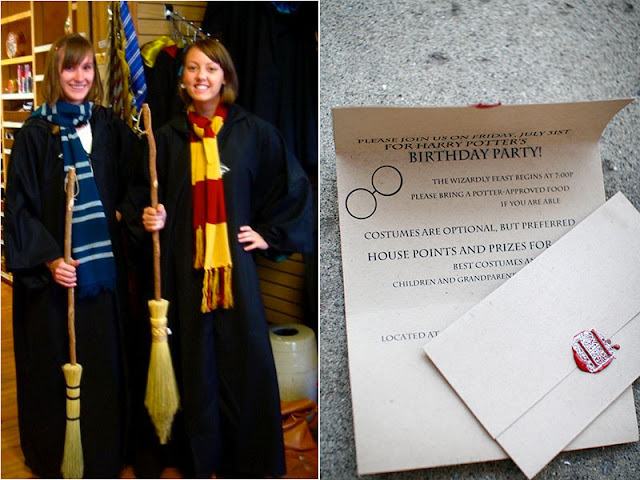 I love this. And this morning I was singing "Have a Holly Jolly Baby" to Vera this morning. I should get out my knitting, but first I'll need to acquire those audio books. Also, i used to be so bad at cutting bangs. Why did I always cut them? Speaking of, I cut bangs the other day so I guess I'm probably only a month away from a pixie. Cutting bangs is the beginning of the end of growing your hair out.

I should have proof read that before I posted it.

Also remember how terribly hot that Harry and the Potters concert was that we went to after we took that photo?

You are just too cute! I love this post mostly because
1. I have a great love for Harry Potter
and
2. I also get the itch right around this time of year for Christmas. Ive already been listening to Christmas tunes for a week! : )

Becky, I hope there is another birthday party for Harry Potter this year. You should keep me posted on the details!

Becky, I've been reading your blog for ages but don't think I've commented. Just started following you on Instagram, too...love the pics over there! Anyway, you're not alone when it comes to the tea drinkin' and yarn projects - I'm currently working on and two blankets (crocheted) that are currently the size of dishtowels, and a cowl (knitted). After this post, I might have to hunt down the HP audiobooks to add to the ritual. :) Cheers to you, your family, and your knits!