When I was pregnant with the boys, I read a lot of parenting books. Everything from a day by day description of how my baby would change over the next two years, to books about communities of mothers, to breastfeeding, to twins, to one million books on sleep, sleep training, and the proper way to swaddle.
Then when my kids were born, I realized that every single author of those books was making it up as they went along. Just like I was.
And frankly, who are those people to tell me how long to let my baby cry before going in to soothe them? If they could make it up, so could I. I was smart, had good parents, and lots of baby-experience.

Just to be clear, that realization didn't come to me immediately. It came about six months in.
After I'd already yelled at a bunch of people for giving my child a pacifier, a bottle of formula, or a ride in a swing.
But I figured it out.
And I tossed almost all of my parenting books. I kept What Mothers Do, which is phenomenal and you should all order it online right now- but that's not really a "parenting book," so much as a book for parents.
And I kept Free Range Kids, which was one of the only books that I'd read and thought, "This mom is awesome."
The one line I remember from the book was this, "You can't baby proof the world, so world proof your baby."
Essentially, it was a book about letting kids do stuff themselves.
I suspect it's the basis for all the things I let my kids do that horrify other parents.
You want to use a knife? Okay, I'll help you.
You want to climb that tall, kind of slippery ladder at the park without any help? Sure, man. Show me what you got.
You want to use this real hatchet to chop up tiny sticks and then throw them into that blazing campfire? Um... You know... Go for it, I guess. 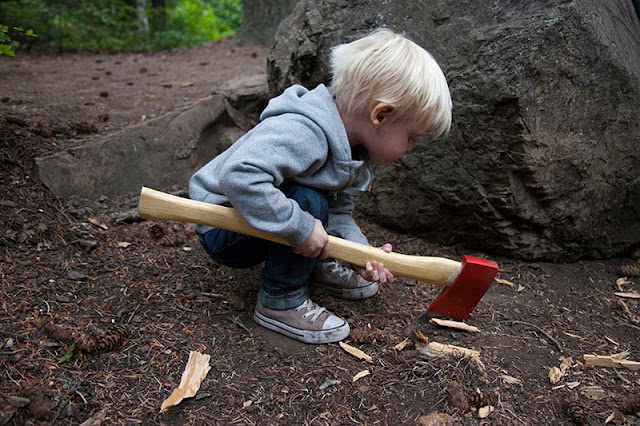 I want my kids to be brave, capable, aware of their own limits- but unafraid to push themselves. I want them to be slightly wild.
(Just to be clear: I want them to be wild like this, "I wear a coonskin cap and run barefoot through the woods." Not like this: "I scream at my mom and throw playdough at babies during church." And for the record, playdough at church seemed like an okay idea for some reason, but IT. WAS. A. BAD. IDEA. I regret bringing it. Never again.)

If there's anything that my kids can conceivably do by themselves, whether it's putting on their shoes, spreading peanut butter over their own toast, or climbing up the rock wall at the park: I really want to step back, hold in my warnings and criticisms, and let my kids take the reigns.

Before babies, Travis and I spent a month in Africa. I was amazed at the kids there. They were chopping vegetables with gigantic knives at four years old. They were taking care of five younger siblings all day by age nine. They were silly, smart, and imaginative: all the things you expect kids to be, but they were also capable. They worked hard and they were expected to do things well.
There are obviously a lot of things about a childhood in poverty-stricken areas of Africa that I do not want to imitate in my own home. I don't even want my kids wielding butcher's knives at four, but I do want my kids to learn how to do things. How to use tools, how to care for others, how to help our family, how to be capable.

It's hard sometimes.
Things are faster, easier, cleaner, safer if I do them and let my kids watch. If I stir a sauce on the stove top, I won't get burned or flick red tomato sauce all over freaking everything. But my kids WANT to help. They can stir.
So I let them. 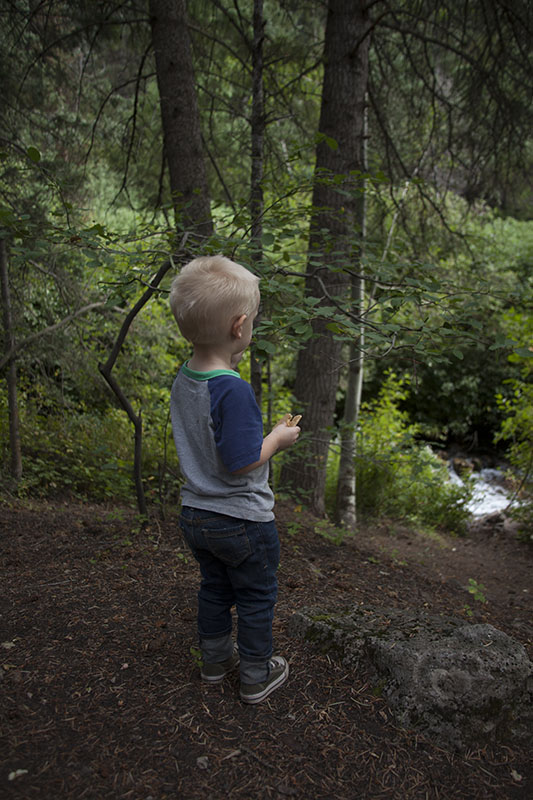 I read an article that said that the majority of young people and teenagers in America today think that they are gifted. They believe that they are exceptionally smart, better than their peers, more talented than their forebearers- despite any proof whatsoever.
They've just been told that they're wonderful every day of their lives until they expect all good things to fall into their laps because they deserve it.
Ug. That's the worst ever.

I do think my kids are the best kids in the whole world and I tell them that every day. But it's a lot more important to me that they are harder workers, more creative, braver, kinder, and more capable than that they are smarter. Better readers. More gifted. Etc.

I think the first words Grey and Micah grouped  together were, "Help please."
And the moment they ask for help, I'm there. But until then: Show me what you can do, little man.

Because someday you'll be a big, tall, grownup man.
And I want you to know that you can take on the world- not because I constantly praise you and tell you that you can, but because you've been taking it on a little at a time since you were ten months old.

You can do this. You can face this world and build it, conquer it, or move it.

And I want to help give you the tools. I want to world-proof you.
I want you to be wild and brave, not timid and afraid.  Strong and capable, not unsure and helpless. Hard working and patient, not entitled and rude.  Kind and helpful, not selfish and lazy.

Posted by Becky Pitcher at 8:30 AM

I loved this. You are a great mother. Let your boys explore.

Great Post...You are an "AWESOME MOM"

so good! I stumbled into the RIE philosophy and the 'self confident baby' book around 4 months in with my baby and its very similar to what you wrote. Respect the baby/child as a whole person and that means let them do their thing. See where it goes, spot them if necessary but let it happen. Let them teach themselves. Its so good and I love that you do that with your boys too. Mine is only 10 months old and looking at your boys is like a little glimpse into the future. :)

This is Amazing! I want all those things for my son, but have a hard time putting it into action. Boston is 19 months old & my only child. I could definitely use this advice, I may be a tad bit over-bearing :)

Love this. My husband has a similar story. Growing up, he felt like it was super important that he help his dad mow the lawn. Imagine a 4-year-old boy grabbing on to the lawnmower while the dad struggles to push its weight plus the weight of an un-practiced child. However, all my father-in-law had to say about that was "I'm not raising grass; I'm raising boys."

You need to read "The Minds of Boys." It is not a parenting book. I actually read it as a teacher. It talks about how boys want to DO stuff with their hands. They want to FIX stuff and EXPLORE. It is a great book.

I think this is so great. You are clearly such an awesome Mom. So, what do you do when your child wants to do something on their own, but you just. don't. have. time. ? I know I should leave time, but, sometimes I don't, and I just need her wearing shoes so we can go buy milk. Urgh.

I'm glad your kids are capable. And I'm glad mine is too. She's just sometimes not as capable as she thinks she is.