My kids hate costumes. With a fiery passion.
Capes, cloaks, hats, headbands, masks, sashes, belts, all one-piece suits of any kind: all unbearable.
I keep thinking I can trick them into costumes, by sewing wings to shirts they already like to wear or by disguising ears as hats, maybe painting on their pajamas.
But they're too smart for that. At first, they were even suspicious of the Snoopy shirt that Grey is wearing below. It has faux-layered sleeves. When I first pulled it out for them to try on, Grey refused merely by clamping his jaw and glaring at me (daring me to try to pull it over his head), while Micah held it up in disgust with two fingers.
He grimaced and pointed at the sleeves. "What THAT?" he asked.
Eventually I won them over, by letting them watch "It's the Great Pumpkin, Charlie Brown" 10 times in a row.
Now they love it. 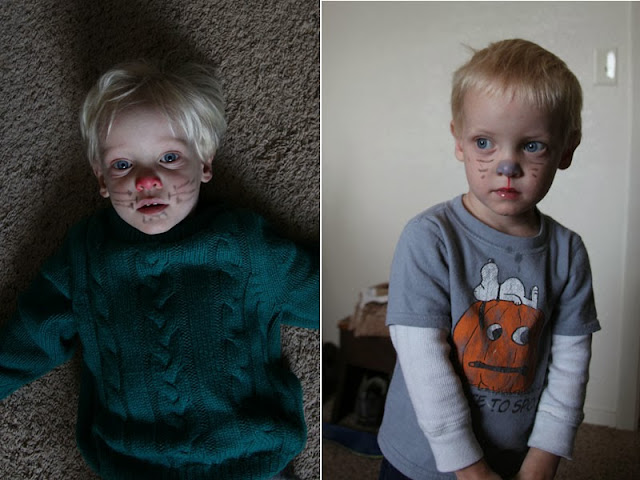 But for some reason, even though they hate costumes, they love face paint. (Even though they look far from thrilled in these pictures.)
When their aunt Katie (who is eight) pulled out the face paint yesterday, they were quick to request their own makeovers. Katie was a cat, so Micah is a mouse and Grey is a puppy (with tired eye lines on his cheeks.)
When they woke up this morning, they were quick to request new painted masks.
Seems like I might be able to get them into costumes after all.
As long as those costumes are all paint...