A few notes: I will not only talk about pregnancy now, I promise.
Also, I love a good rant every now and again, I hope you'll forgive me.
Lastly, seriously. Look at the those pictures. Can you believe that people would say, "You don't even look pregnant!" to me? They said it all the time! It was a LIE. 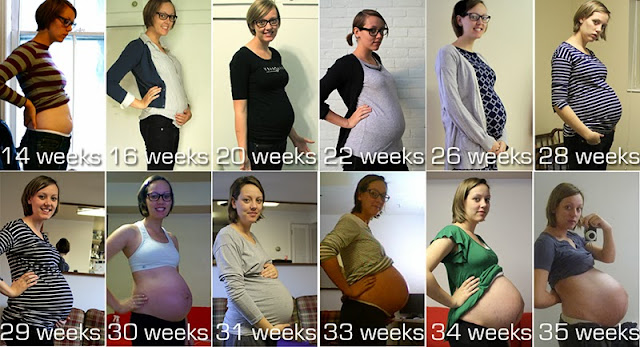 I am not far enough along in my pregnancy to have gotten this phrase thrown at me very much yet, but I got it for 5 months last time around.
And now, I have other pregnant friends, a few months ahead of me, and I see this phrase plastered all over the comment section of every picture of them sporting a baby bump:
"Oh my gosh, you are so tiny you don't even look pregnant!"
Apparently this is a compliment.
It makes me mad.
It's the worst compliment.
Pregnant women should look pregnant!

Are we so obsessed with thinness as a society, that we think it's a compliment to tell a woman (with A CHILD INSIDE HER), that she is tiny?!
When I was pregnant with the twins: I was not tiny. At all.
A stranger literally said the words to me, "I didn't know pregnant women could even get so huge!"
And yet: almost every day someone would say to me: "You look so small, I don't even believe you're carrying twins!"
Or "You're so tiny, I'm jealous!"
Or even, "You hardly even look pregnant!"

First of all, those were downright lies. It made me mad that my friends were lying to my face, while people at the grocery store were constantly asking if I needed to be rushed to the hospital, because I looked ready to burst.
I do think it was intended as a compliment, maybe like "You look so healthy," or "Your face isn't swollen," or even, "You're all belly!"
But that's not what people said. Instead they told me insulting lies. They said I did not look pregnant or that my beach ball-sized belly was in fact, basketball-sized.

But the real reason that ubiquitous phrase of, "Oh my gosh, you look so tiny!" really made me mad was this: I was working my butt off trying to grow babies.
Do you know how many calories I had to take in every day? And I wasn't eating McDonalds. I spent almost all day preparing and eating a variety of healthy foods to keep my at-risk children growing. And it sucked.
It sounds great, right? For eating to be your full-time job? But it's not. Because I was tired, I was poor, I had heartburn and only a tiny bit of space in my body left for food- so I had to constantly be eating. All day, and often through night. (Pack those calories in whenever possible!)

So when people said, "You don't even look like you're having twins!" I was ready to stab them with the fork that I was probably holding.
When they said, "You're so tiny!" I panicked and thought, "Am I too tiny? Should I be bigger? Are the boys healthy? When's my next ultrasound, maybe something's wrong!"

I will never tell a pregnant woman that she looks tiny.
In fact: let's not comment on each other's weight, okay? That seems like a basic rule of human interaction that is completely thrown out the window when there's a baby inside you. Suddenly, it's not only acceptable for your close friends to mention your pant-size, but for complete strangers to cross the street to come over and tell you that you're gigantic.

Here are some good things to say to pregnant women, "You look great!"
"You look so adorably pregnant."
"When are you due?" (NOT "When was your due date?" Or "Are you in labor?" Or "You look ready to pop!")

Sometimes it slips out of me. I say, "Oh you're so cute and little!"
Because little things are cute, obviously.
And I immediately regret it. I want to give a disclaimer: "Not that you're too little. Your belly isn't little, it's just the right size. You're just a little person with a little baby in your appropriately-sized belly."
But that seems worse, doesn't it?

Anyway. This post was brought to you by my desire to never have anyone tell me about the size of my stomach.
And when in doubt, people, err on the side of "Oh my gosh, your belly is huge!" because I appreciate that much more.
And it least it gives me interesting anecdotes.

Posted by Becky Pitcher at 1:33 PM

Email ThisBlogThis!Share to TwitterShare to FacebookShare to Pinterest
Labels: pregnant, rant, self

It made me feel weird when people said, "You're pregnant and I'm fatter than you are!" I wanted to say, well even though I'm pregnant I eat healthy, I do yoga and I'm only gaining an appropriate amount of weight, fatty. However, on days when Matt would say, "uhm your belly is showing on the underside of your shirt." Or I wanted to have sex so badly but my 8 month pregnant body was not very sexy (bless Matthew's heart), I did really feel a boost when people told me how great I looked. It was nice to be told that you are not a slovenly beast, even after you ate cookie butter (which the very name makes you seem slovenly) and that you are in fact lovely and you look good even for pregnant. I liked that.

What about touching pregnant bellies with both hands without being invited to do so? Write a rant about that. I had a lady hang out the drive thru window at a sandwich shop to touch my belly once. Yikes.

I completely agree! People need to REALLY not comment on the way that pregnant women look, firstly because it usually isn't really a compliment and secondly because some women are dealing with real health problems or concerns. I got a lot of "you're so tiny" for a while, but then I developed polyhydramnios (extra amniotic fluid) and got tons of "you're huge/are you sure it isn't twins/etc" and you know what sucked? There was a chance that there was something seriously wrong with my baby. Or that I could go into early labor, or that the extra fluid could cause cord compression and kill him when my water broke. It was REALLY serious and it made me want to cry all the time. When I was pregnant with my daughter someone said to me, "You are the cutest pregnant woman I have ever seen!" and that is all I ever want any stranger to say to me about my pregnancy. Ever.

I love you, great soapbox.

Sorry, I don't know why it posted twice. Got to say I'm right there with you on the heartburn, too. Did I ever tell you Malcolm was over ten pounds and his placenta was over three pounds? I could barely eat anything, it was so frustrating. Sometimes I would sit and cry because I was so hungry but didn't want to eat for fear of the acid reflux.

For the past two and 1/2 years, anytime I've seen a pregnant girl at the store or elsewhere, I always tell them, "You look BEAUTIFUL!!" I always wished people would say that to me... I just always got comments on how huge I looked. Haha. Amen to never commenting on weight! Great idea!

I wholeheartedly agree!
I got so sick of people talking to me when I was pregnant with my twins that I stopped making eye contact with people and then I continued that practice when they were infants and I just wanted to get into the grocery store, buy some coffee, and get out and not answer 20 bajillion questions. I have yet to retrain myself how to behave normally around strangers.

This was a wonderful soapbox. PS. I am very excited about your third baby. Congratulations!

The touching and the comments on pregnant women stem from a larger cultural issue. It's so easy in our culture to forget that the woman standing there is an individual with needs and feelings. Everyone focuses on the baby, because they're seen as a future contribution to society. Women are only seen at the carrier of the contribution. As for the comments, since women are seen as baby carriers before individual human beings, their bodies are to be critiqued and talked about. They are vessel carrying out a duty, and are treated as such. Your body size directly relates to how well people think you're doing your "job" well enough. This ties in with our society's impossible expectations for women to look pretty and thin at all costs and at all times. The people being "nice" overcompensate by saying you look thin when you don't and you shouldn't. The others make you feel like a whale.

Pregnant women are human beings, already sacrificing life and limb to grow more human beings. Their privacy and autonomy should be respected. Pregnant women come in all shapes and sizes, much like how they are when they're not pregnant (all shapes and sizes). Let's not be comparing one pregnant woman's size to another's. It's pointless, unhelpful, and unkind to the humanity of women going through the process of procreation.

People telling me I didn't look like I was having twins, and that I wasn't very big was by far my least favorite comment ever! Like you, I would rather have them tell me I was huge (because I was, and that's how I felt). Totally with you on the soap box!

I agree with this post. I am currently pregnant and I hate it when people say I don't look pregnant or that I look tiny. I think to my self "first of all, I'm not tiny and second of all I am pregnant. So my stomach just looks like I've gained a bunch of weight?! I am pregnant!" Rant over. Thanks for this post!