The funny thing about the boys is, 99% of the time, they don't look alike.
I mean, sure. They look alike. But they don't look the same. Strangers or people we see infrequently may have difficultly remembering which features belong to which boy.
(Okay, one of them is thinner, with more delicate features and longer hair. One has a wider smile and a squarer face - but which one is which?)
But rarely do people think they look the same. In fact, when I'm out with the boys, people often ask if the boys are fraternal (or even if they're twins) and are surprised by my answer. (Although, they also say things like, "What do you mean they're identical? They have different haircuts!)

And the more you get to know the boys, their different voices and the way they move, walk, sit, and smile- the less alike they seem. You don't need them to have different haircuts to know who is who.

And then, every once and a while, they look exactly the same. I do a double take, or call out, "Hey!" so they turn and say, "What, Mom?" and I suddenly know who they are.
It's weird and disorienting, because I can honestly say, They do not look the same to me at all, but sometimes I can't tell them apart.
That doesn't quite make sense, does it? 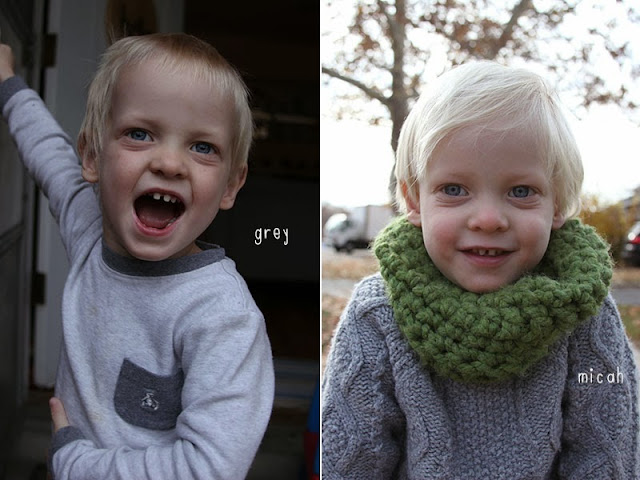 Last week, I took some pictures of the boys, which you've already seen on the Photo a Day. They were taken in different light, locations, different days, different expressions, different boys.
But when I put them next to each other, I was surprised by how similar they looked in them.
They looked like twins.
Identical twins.

Oh my gosh, I love these boys. When I was pregnant the first time, people would often say, "Oh, I wonder what your babies will look like!"
And so far - all my babies look the same.
They have baldy heads and crinkly blue eyes. They have fair skin and long, knobby limbs. They have jack-o-lantern teeth and little button noses.
So when I picture this new baby, I picture my other babies.
But, really, I wonder what this baby will look like. Will he (she?) look like my others? Or have her (or his?) brothers' coloring, or be dark eyed and olive skinned like me?
Oh baby. I can't stop thinking 'bout you.
What will you look like?

Posted by Becky Pitcher at 8:52 AM

I was totally obsessed with thinking what my second bubba would look like, and like you I just pictured what I knew. The funny thing is that when she arrived she looked so totally different as a baby that I found it amazing that is created both those people, but as they grow they look more and more alike. I think the wonders of genetics are just fascinating. I think the truth is, their little faces become so familiar to us, that your new baby will look totally different to you, even if other people think he or she looks likes the twins. x

So this is random, but I couldn't help but think about it while reading your post. In high school, my first kiss was a twin. Turns out, he didn't like me that much, so after our first kiss, things fizzled. But, his twin (and yes, they were identical) took notice of me, and pursued (this is sounding creepy, but I promise it wasn't). Turns out, I liked his personality a lot better than his brother's, and obviously I liked his physical type, so we started dating. It was extremely awkward at first with his brother (the first twin/kiss), but after months and months, it all became normal. However, there were times where I would come over and I'd see both boys from behind and would have no clue which one was the one I liked...Once they turned around though, the differences were so easy to tell (even though EVERYONE said that they were so identical). Anyways, that was a long story, but I have thought about my 'twin' experience several times while reading your blog over the years. And let's pray your boys never fall in love with the same girl someday...I could seriously write a book about the craziness of the situation.

My girls are fraternal twins, and I think they actually look a lot alike, but I know exactly what you mean. I can mostly tell them apart, but then there are times that I'm so weirded out because I think, "why is Ruby using Emmy's voice?" Or whatever. And then I realize, oh wait, that IS Emmy. Honestly though, it's easier to tell them apart based on personality traits but I can't lie: sometimes I struggle. Which is really weird to me.