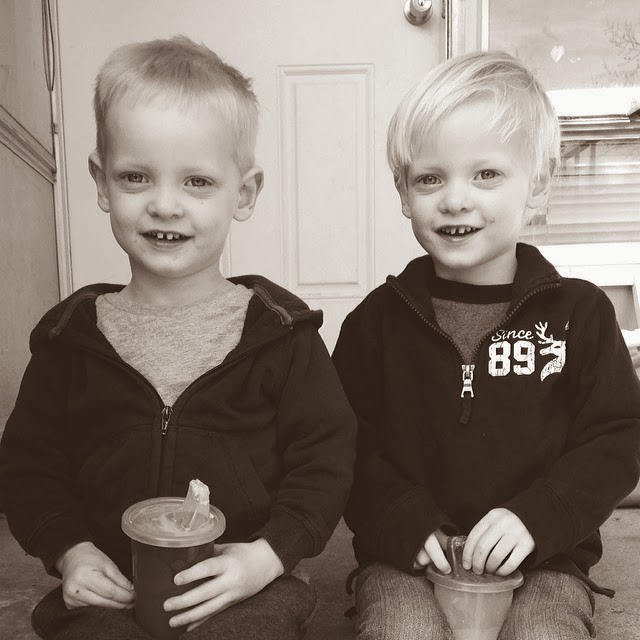 In the past couple weeks, the boys have brought up the recent death of my grandpa several times. It's strange, because even though we were at his house when it happened - they didn't see him die or attend his funeral or anything. We hardly talked about it, except that when they asked where he was I said, "Grandpa Jim died, we won't see him anymore - he went to be with Heavenly Father."
Since they were little and didn't seem too worried about it, we didn't really delve into details.
However, 5 or 6 times in the last two weeks, the boys have brought it up. Usually, while we're all sitting together in relative silence, like in the car.
One boy will say, "Mom? Grandpa Jim died, though."
"That's right," I'll say.
"Grandpa Jim did die," his brother will agree.

Sometimes that's the end of the conversation, but the last few times they've brought it up, they've continued like this:
"Grandpa Mike didn't die though."
"No, Grandpa Mike is still alive."
"Grandpa Dave is alive, too?"
"That's right."
"Great-Grandma is at her house, and she didn't die."
"Yep. All your other grandparents are still alive."
"But Grandpa Jim did die."
It's interesting seeing them try to figure it out, and I like hearing them try to remember things that have happened without me bringing them up.

In other, goofier news, Grey has become quite the photographer. It's so funny, because I can really see myself through his eyes. Yesterday as Micah lay on the floor by my feet- whining to be picked up, Grey jumped up and yelled, "I'll get the camera." He came back and stood over his brother. "I'm going to get a picture of you whining," he said.
Haha, I wonder where he's heard that? Admission: I often photograph my kids whining and crying. It helps me feel better about the situation.
But he requests the camera for everything. He built a big lego house? He wants to take its picture. It started snowing outside? Time to get the camera.
He requests that I take his picture, and then dictates how I do it! "I'll make my face happy like this, and then I want to see it."
At his grandma's house on Sunday, he ordered, "Say click when you take it!" because he wanted to know the moment that she was pressing the button.

Micah has created an imaginary friend / action figure / I don't know what. His name is Boy. Boy is Micah's pointer finger and middle finger. He walks around the house, climbs on us and the furniture, holds conversations with Micah.
Micah will walk his fingers up my arm, and ask me, "What is Boy doing on you now?" or "Can Boy climb in your hair?"
I have also heard him have several conversations with Boy. They sound like this, "I want to go outside! Okay, Boy! Let's go after you take a nap. I don't want to take a nap." Then he lies his hand flat on the table. Then it pops us again. "I'm awake!"
Not only does Micah have Boy, but the rest of us have "boys" as well. Micah will trot his fingers over to mine and ask, "What's your boy doing?" I am then expected to walk my fingers around, possibly chasing Micah's or jumping from item to item on the table.
The other day, I heard Grey say, "Let's make our boys wrestle!" Then Grey and Micah essentially had a thumb-war, while giggling their heads off.
It's great makeshift toy!

The carseats were in our house yesterday while Travis had the car loaded with film equipment. I caught Grey pretending it was a toilet. No. He didn't go to bathroom in it, instead, he used his toy ax to pretend and unclog it! Yikes. He's been pretty interested in the plunger for about a year, and is upset daily by the fact that he isn't allowed to use it. Yesterday as he pretended to plunge the carseat, he kept up a horrifying running commentary. "I just gotta push this poop down. Let's flush it again, oh no! Here's comes up more poop! I'll push it down with the water."
Sigh. Welcome to life. I hope plunging your poop is always such a delight.

In addition to a fascination with plunging, Grey is also reallly into babies. When a friend was here recently with four month old twins - they was a moment of chaos when several babies were crying at once. Grey was ready to take over one of them, rocking her gently in her carseat, holding her pacifier in place, singing, smiling, and talking to her exactly how I speak to babies. "You don't need to be sad! Oh! Look! I see your tiny foot, it's such a cute little foot, I'll tuck it back in for you!"
I almost exploded. Since then, we've gotten the infant carseat out, and the boys spend upwards of 30 minutes at a time, buckling their doll in and out of the carseat, rocking the baby back and forth, and practicing tucking in their doll's feet with Baby Brother's special blanket. They like to ask, "Is this too fast? I'll rock you nicely." Then Grey will sometimes pick the carseat up and spin it around, and then yell, "Are you dizzy now, Baby?!"

I noticed a couple little bruises on Grey's arm and asked, "Oh, what's this?"
"Probably a spider bite."

Micah: look at this Lego house! You love it, Mom! You do love it! You do!

Me: Oh, look, Grey! A birthmark on your belly!
Grey: Who put that birthmark there?
Me: That's the way Heavenly Father made your body, with a little birthmark.
Grey: I want to wipe it off!
Micah: You can't, Grey! Jesus LOVES that birthmark.

Travis: Okay, it's time to go!
Grey: I just want to play with playdough for two minutes.
Travis: We don't have time.
Grey: Just two seconds! Two seconds of playdough!

Micah: Hey! You have the iPad?
Grey: Yep! Let's watch a movie.
Micah: We should hide from Mom?
Me: I can hear you!
Grey: Shh! Be quiet! It's okay, Mom! We'll just look at movies, but not watch one. **Whispers** let's watch a movie in Mom's closet.

Me: You don't get any other food tonight besides this dinner, and you don't get milk at bedtime unless you eat. Understand?
Grey: I understand. I am never going to bed again.

Travis: You guys have been so naughty today.
Me: If you were Pa Ingalls, you'd have beaten them already.
Travis: Hmm. Maybe we should beat them.
Grey: I don't want to get beat up, Dad.

Micah: What's wrong, Mom? The baby kicked you pretty hard?
Me: Yep, he's really moving in there.
Micah: Hey Baby Brother! Don't you hurt my mom. You have to go to time-out!
... Is the baby in time-out now?

Posted by Becky Pitcher at 7:01 AM

Grey's head looks giant, just like his Grandpa Chris. I love all the cute conversations and all the pictures yesterday!

Wonderful conversations. They are so clever!