An essay about marriage. But first, a bunch of pictures! 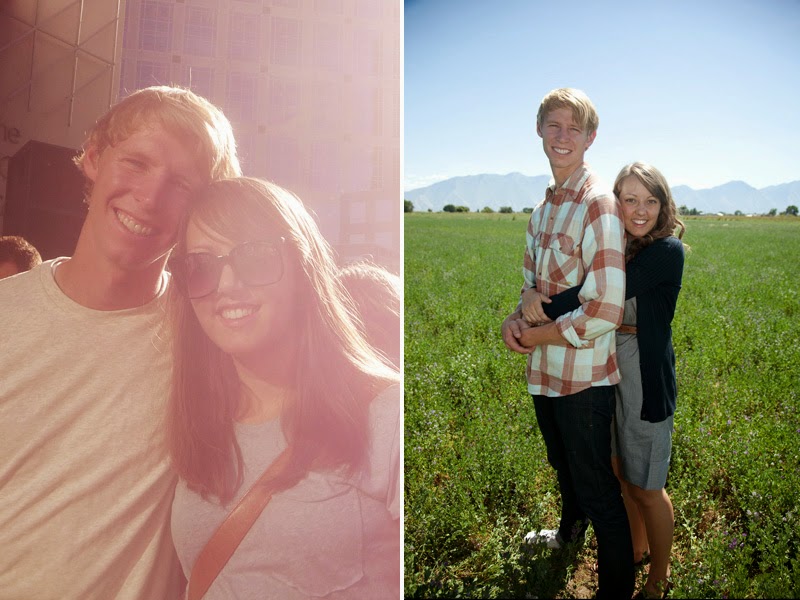 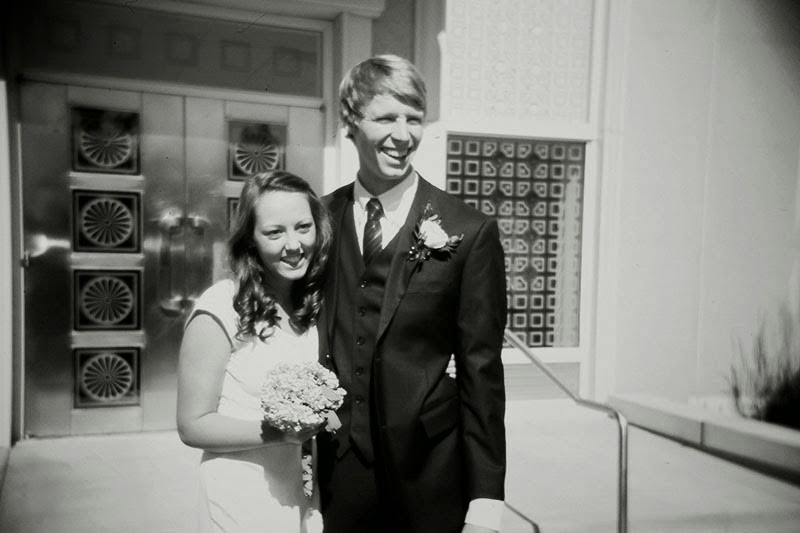 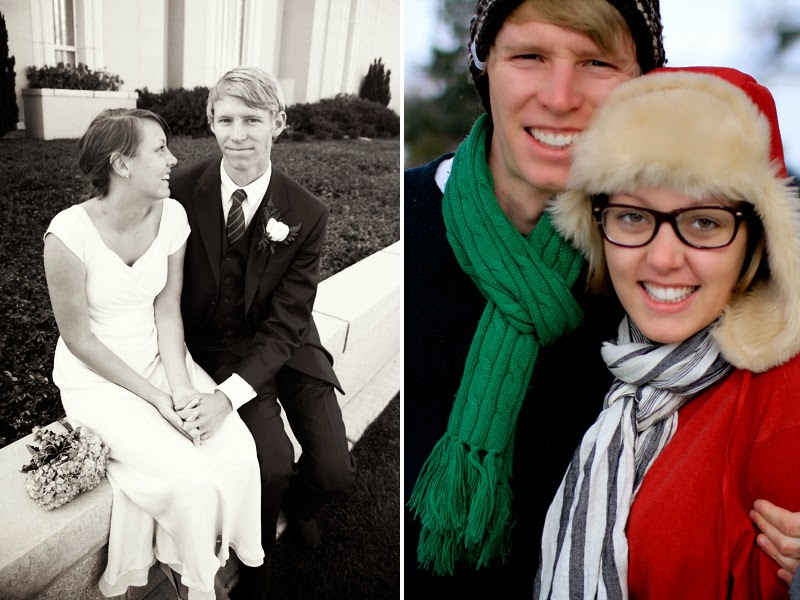 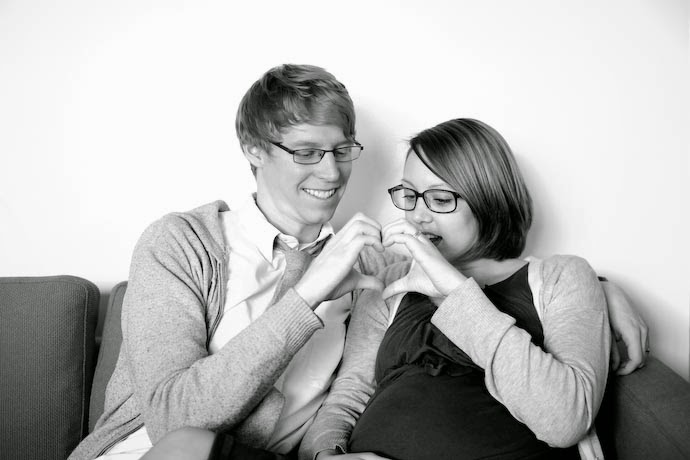 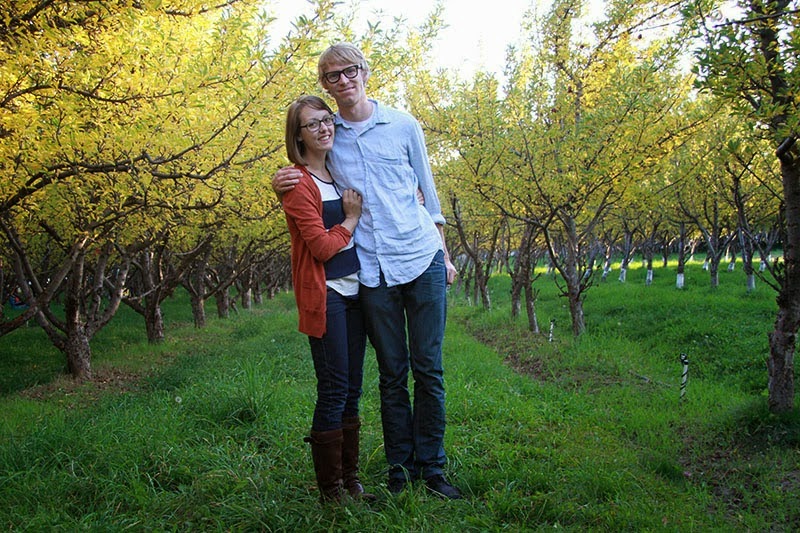 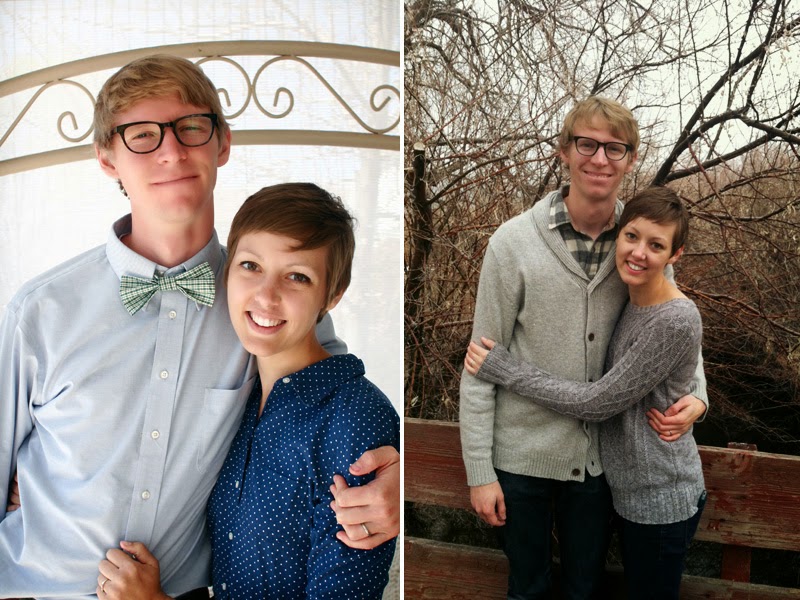 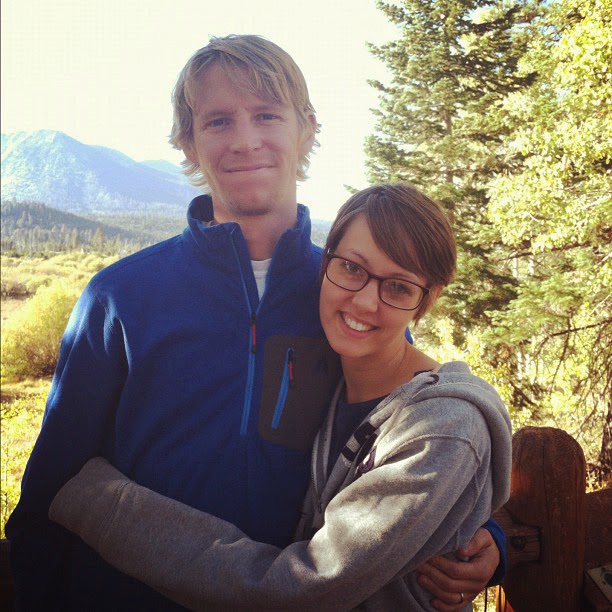 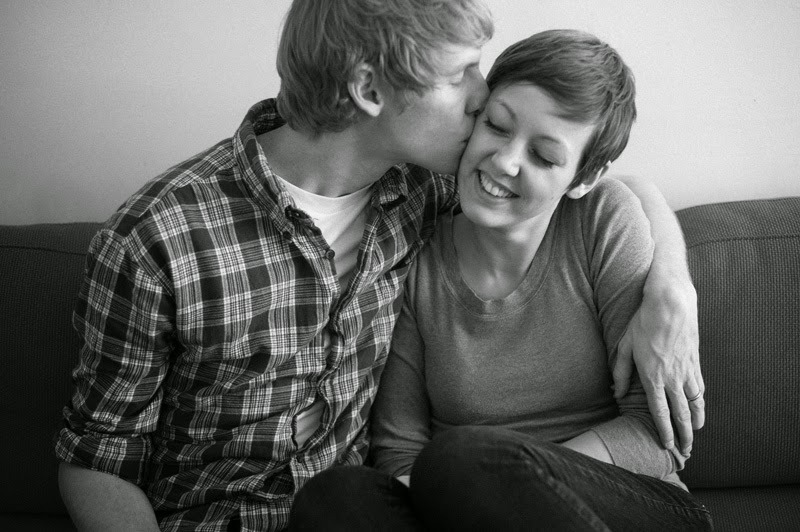 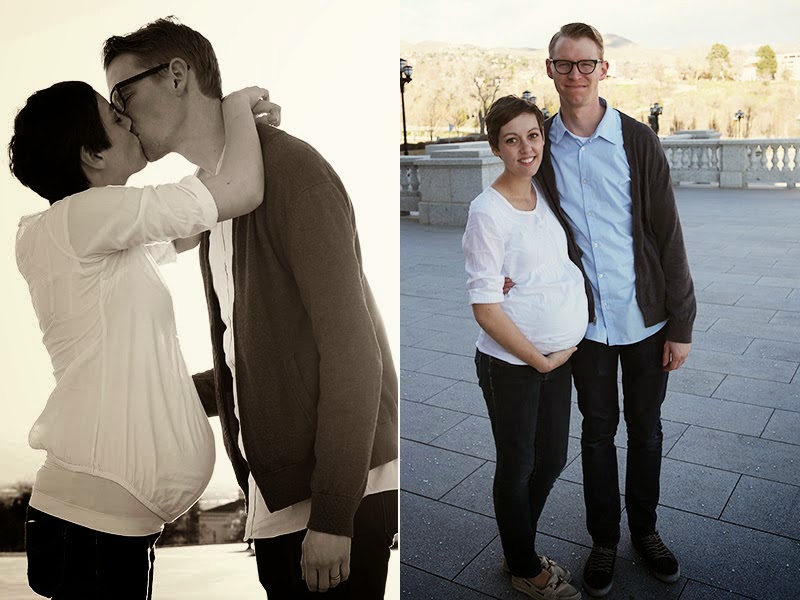 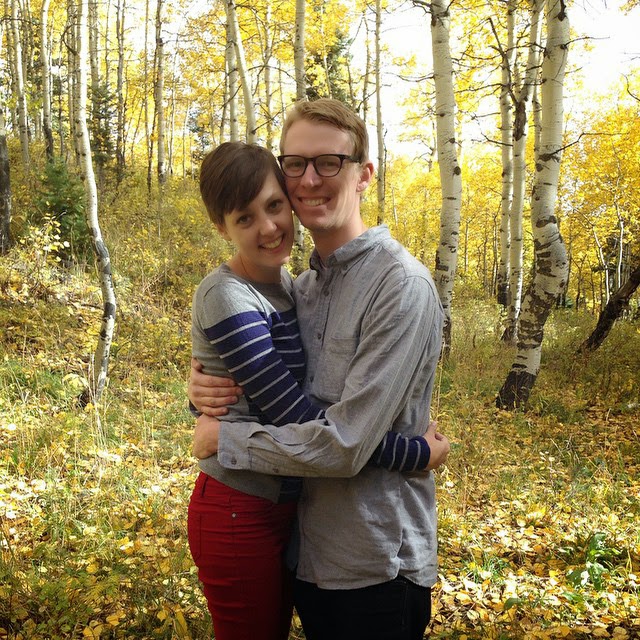 In case you missed it, Travis and I just celebrated our five year anniversary. I know, in that life-long scheme of things, five years is nothing. Both his and my parents have been happily married much longer than that, our grandparents- even longer.
We both come from long lines of happy marriage, and I have no doubt that Travis and I will be together for.ever.
Five years is still just the beginning. But still. I'm pretty proud of that little number, in this day when so many people we know have been married and divorced in less time than that.
After mentioning my old blog a few posts back, where I talked about young-adult Becky, I went back to reread some old blog posts. On our twelve hour road trip home from San Francisco, I read old blog posts aloud to Travis.
And cringed.
There was a lot of cringing.
I posted about Travis the day after our first date. I posted about him many, many times after that. Rereading these posts, I am astonished that Travis and I fell in love. That we got married!
I was loud, brash, sassy, opinionated, lazy, passionate, self-absorbed, crazy, confident, sentimental, nostalgic, and did I mention loud and sassy? (not all bad, and not all of those things have disappeared.) I was 19, and full in the throes of my teenage rebellion. I wanted to be different than the people around me. I wanted to be cooler - and I certainly thought I was.
And Travis! Travis was quiet, thoughtful, good, hard-working, passionate, kind, a bit dorky, forgiving, old, and so sincere. If words came out of that man's mouth- he meant them! I would pledge, fight, promise and declare things that I hadn't ever even thought about. Just because I said it, didn't mean that I meant it. And I certainly didn't believe in "private" information. Anything and everything was a potential topic of discussion or fodder for a blog post (not much has changed.)
But not Travis. He seriously must have thought that I was insane.
He was 25 and I was 19.

I remember once, Travis and I went to a movie together and I posted about it on my blog. Afterward, his parents called him - worried about the content in the film. They came over to his apartment. Travis and his Dad went on a long walk discussing the inappropriate sexual content of the movie.
And I flipped out. I couldn't even believe it. He was a grown-man! His parents still wanted to control him, and worse! He was totally letting them! If my parents called to give me advice, I 100% completely ignored them unless they managed to convince me that what they were saying was my idea all along.
That was almost a deal-breaker for me. I talked about that incident a lot, with my roommates and friends, with my parents and sisters, with Travis. I couldn't believe it.
(Now, over  five years later- I can completely respect everyone involved and all of their motives, but at the time? No way. It was inexplicable.)
Travis' mom used to read my blog all the time and call Travis with concerns. I couldn't handle it. It made me so angry! But now, knowing this woman- and her houseful of sincere, not-outspoken people I can understand her. I used to rant to my own mom, "Why does she take everything that I write so literally?" Oh. Because that's honesty. No wonder she was upset by the stuff I wrote. I reread it now, and I am a bit horrified, too.
No wonder everyone thought we were crazy for getting married. Why, how, why did we decide to get married? When Travis called to ask my dad's permission to propose to me- my dad laughed aloud!
I still can't figure it out.
I literally don't know.
I kind of think that it began like this: I was a manic pixie dream girl (a little, maybe not quite). But I was pretty, silly, and crazy and Travis liked that. So he was willing to put up with the fact that I was also insane.
And Travis was doting, affectionate, and took care of me and bought me stuff (ha!) and I liked that, so I was willing to put up with the fact that he was kind of a dork.
And then, quite by accident, we fell in love.

I'm over-simplifying, I'm exaggerating, I'm story-telling instead of making a graph of the pertinent information (all things that I do constantly, but which confuse and upset the overly-sincere reader, I think).
But that's what life is, really, right? A story that we tell, that we live, that we dream out and strive for.
Mine is the best love story I know.

Because we got married, and never, ever once- not even in the darkest, saddest, angriest corners of my mind have I ever regretted that. Being married to Travis is the best thing that could have ever happened to me, it is the perfect, shining moment that set the rest of my life off on the right foot. Being married is never hard, being married is only wonderful.
And since you're probably wondering: Let me tell you what I mean.
Sometimes it is hard that Travis and I might want different things.  Sometimes I am frustrated or angry with him because he is dumb or I am dumb. Sometimes we are both stupid, or neither of us is stupid- but we're different.
But we're not that different, and we never want extremely different things. It's not like he wants to move to Africa and I'm forcing him to stay here or I want ten more babies, and he's making us wait. It's more like, I want him to stay home from his trip and he can't. Or I want to buy our own house and we can't afford to.
I don't think that those are even things where one person is at fault. That's just life. So we aren't angry at each other. And sometimes I want ice cream in a waffle cone, and he's like, "No. Let's just go home, what a waste of money. We have a gallon of ice cream at home." And I'm like, "PLEASE. I just want a freaking waffle cone, I've been craving one all day!" And he's like, "YOU'RE DEMANDING!" And I'm like, "YOU'RE UNKIND!" And then he buys me a waffle cone, and I pout about it, and then we forget and no one is mad anymore. Because how can you be mad when you have ice cream?
So sometimes, we fight about ice cream or baby names. But those don't even count as fights, and they're quickly resolved and forgotten.

I am grateful that Travis and I got married when we did. Because I was a bratty teenager, I mean... a petulant child. No. Umm... I was immature and opinionated.
There. Let's go with immature and opinionated, since that is less offensive to myself.
I was ready to start the rest of my life. I was in the midst of self-discovery and "becoming the fullness of Becky" (a phrase my BFF coined).
I probably could have gone any which way. And I know that modern society and philosophy would encourage me to have grown-up, discovered and become "myself" before getting hitched.
Because it's true. I am a different woman now that I would have been if I had not married Travis. He has changed, shaped, and molded me into someone I wouldn't have been.
But being yoked with someone who always thought and expected the best of me, who loved me fiercely and passionately, who believed that I could and would do anything I wanted, who respected my opinions, laughed at my jokes, and told me that I was smart, good, and beautiful: it made me better. It made me so much better than I ever could have been alone. It has, and continues to be, what shapes me into a better person. Every day I think and hope I am a little bit better because of Travis.

He didn't stifle me, change me, or force me to grow up and learn to cook. He just loved me completely, flaws and all. And ours is the best love story I know.
Here's to five more years! And fifty more! And a billion! And all eternity!
And maybe midway through our eternal marriage, we'll find that somehow his goodness has cured me of sarcasm. So far, it's doing a pretty good job. And I'll go ahead and take some credit for the fact that Travis is definitely cooler than he was when we met. There. That is my contribution to the last five years. A little cool factor and three cute babies.

Email ThisBlogThis!Share to TwitterShare to FacebookShare to Pinterest
Labels: essay, marriage, self, travis

I just wanted to let you know that I am still an avid reader of your blog (since 2012!) and congratulate you on your anniversary. Though we live very different lives, we are the same age and every time I come to your blog it reminds me of how truly interesting life can be. Also, you write as I would write if my life was interesting enough to have a blog. Best wishes to you and your family!

I bet your mother-in-law was horrified reading your blog 5 years ago! Since she knows you better now I hope she just laughs at you like we do. You are funny and zesty! You brighten all our lives. And Travis makes all of us want to be better!