"If you want your children to be intelligent, read them fairy tales" 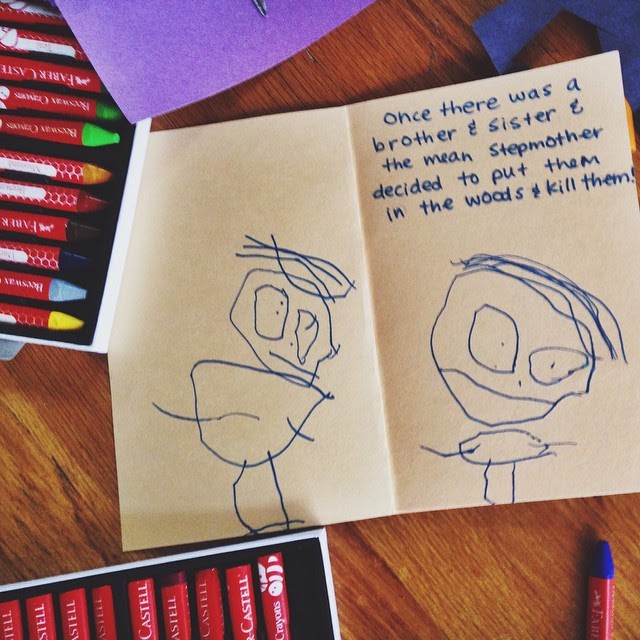 Lately my kids have fallen completely in love with reading. It's the greatest thing ever, and as far as I'm concerned- I've succeeded as a mother and accomplished almost all of my parenting goals. (Now that I'm done raising my children, I'm looking for some new hobbies.)

The boys each got a big, fat book of fairy tales for Valentine's Day this year (books for Valentine's Day is one of my favorite family traditions.) and I've loved reading them together. (This one and this one.)
The boys will ask to hear new stories and we will read them together, and then they'll ask me to retell them whenever we're in the car or somewhere else without their books.
I've been trying to get the boys to tell the stories to me, but they were so half-hearted! ("Okay, a princess comes to a castle in the rain and sleeps in a bed with a pea. She can feel the pea, so she's a princess. The End.")

Until I had an epiphany! I actually wrote down- word for exact, brilliant word- my kids' versions of their favorite stories. Now we can read their versions of the books instead of Hans Christian Andersen's or The Brothers Grimm. Grey and Micah are so proud of their stories and so am I!

I am amazed by all the little literary phrases Grey put in (like he was reciting from an actual book!), like "a tear ran down the frog's face." And I love the way Micah clarifies through out his story- like when he explains to the reader that the witch has a wood burning stove, and that's why she could be pushed into it and cooked.
So, here you go. Here are some real children's stories for your enjoyment.

The Princess and The Frog, retold by Grey:

Once there was a Princess, and her was playing catch and her dropped it in the water.
A frog appeared and said, "If you let me come to your palace last year, I can get it."
So the frog got the golden ball, and the princess ran away.
There was a knock at the castle door. It was the frog!
The frog was hungry and decided to ate on her plate.
It was dark and the princess jumped on her bed and the frog hopped on her bed too. The Princess throwed the frog at the wall, and a tear ran down his face.
"Give me a kiss!" he said.
"No! You are gross, and I am afraid to turn into a frog!"
"Please!"
"Okay. I will."
So the Princess kissed the top of of his head and PAWALOOP! the wicked spell was broked and the frog was a handsome prince. They happily lived ever after and she married the frog prince, but he wasn't a frog anymore!


And Hansel and Gretel, retold by Micah

Once there was a brother and sister, and the mean stepmother decided to put them in the woods and kill them!
But Hansel put little white stones on the floor and followed it back to their house. But then they followed it to a house made of candy!
"Who's nibbling on my house?" It was a grandma.
But the Grandma was very a witch!*
She put Hansel in a cage. The witch wanted to eat him! She wanted to feel how fat a hand he was getting, so Hansel sticked out a chicken bone (because she ate a chicken.)
She felt how skinny the chicken bone was.
The witch decided to eat him right now! She told the sister to stick her head in the fire and feel how hot it was. Then Gretel pushed the witch in! She had a fire-oven with a chimney!
Gretel got Hansel out by a key by the witch's pocket. And they had gold and candy for them to eat. They got back to the house after that.
The end.

*Micah uses very and really interchangeably, which is adorable. It makes sense to say "I'm very/really hungry!" but less sense when he tells me, "I am very Luke Skywalker!"

Posted by Becky Pitcher at 6:41 AM