The inversion in Utah is SO BAD right now. In case you're wondering, that is when all the pollution is trapped inside the bowl of the mountains and the air quality is so terrible that it's dangerous to go outside. Until I moved here, I didn't know this happened outside of places like Hong Kong. So we are trapped inside, using inhalers and feeling gray.
So today, we needed to get out. We drove a couple miles up into the canyon by our house, and hiked above the pollution line. It was pretty horrifying looking back down at the city, almost worse than being inside the city and losing sight of the mountains that are so close.


At first, on our hike, the boys were shouting and laughing, racing back and forth up the mountain. Throwing snowballs and sliding down well-packed snow banks.
"I see a water fall! I hear a bird calling! Look at the water trickling in the mud!"
And I was thinking "Why don't we go on hikes EVERY DAY? This is amazing!"
I took some very cute pictures of the boys and was already planning on posting them with the following caption "So proud of the boys today, Grey and Micah ran the entire three miles of this hike, carrying all our snacks and water! And August walked the whole way too!"
And then.
They didn't. 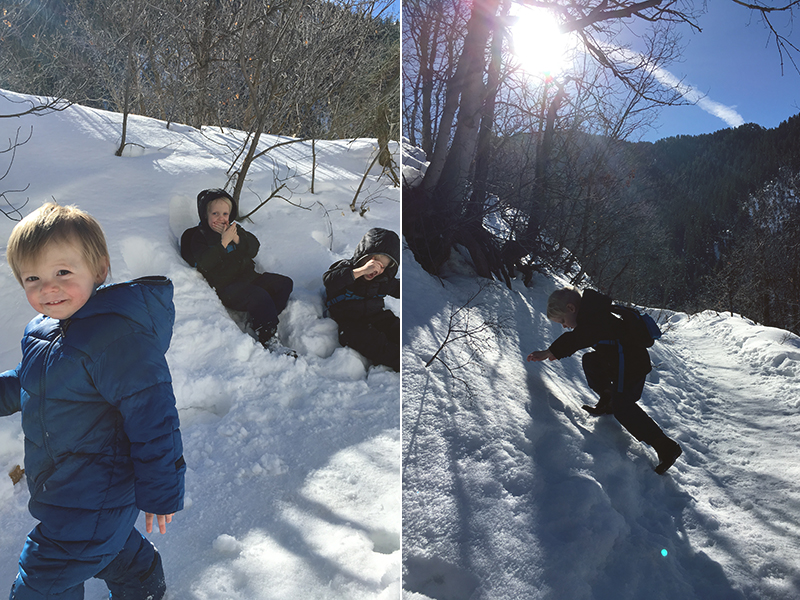 A quarter mile from the peak, all hell broke loose. Grey and Micah stripped off their coats and started crying that they were too hot to walk anymore. August decided that he also needed his coat off. And his boots. And he wanted to walk barefoot in the snow.
I, very cruelly, wouldn't not let him take off his boots.
He refused to walk and fought being carried. He kicked and screamed, and pounded me with his fists, squirmed, smacked me in the face and tried to grab things out of my hands (like his own coat) and throw it off the mountain.
The boys didn't want to carry or wear their own coats- but instead were like "Fine. I don't care. Leave them here on the mountain."
THEN, when I almost slipped off the muddy/icy path and could have fallen and gotten very hurt, Micah said, "I don't want you to fall off the mountain, because I need to you to make me a cloak and a bag!"
"You don't want me to die, so that I can make you a cloak?" I asked.
"AND A BAG!" he yelled.
"Wouldn't you be sad not to have a mother? Or only sad about the cloak and bag?"
And he shrugged and said, "Eh."
Which did not make me feel better.

So I ended up dragging/wrestling/carrying three pathetic boys the mile and a half back to the car (it felt MUCH LONGER on the way back). About half way back, I finally yanked August's boots off him, hoping to pacify him into letting me hold him. He screamed himself to sleep in my arms and then, of course, woke up when I tried to stick him back in the car.
So I had to physically restrain him (which, for some reason, is amazingly difficult, considering how small he is) while I forced him into a carseat and he screamed "NO BUCKLE! NO BUCKLE! NO BUCKLE!" Luckily we were only about 5 miles from home, so once we were in the car- I only had to deal with the screaming for another ten minutes.
Now everybody is in bed (not napping, mind you. Having forced "quiet time") and I am writing this because Travis is out of town.
And when he leaves, I often go days in a row without speaking to any other adults.
Which, in case you're wondering, kind of sucks even more than hiking with three kids. But not as much as inversion.

Aw, I love you! I'm sorry the hike turned out that way!

It's much prettier in the mountains then in SLC. Your kids sound normal, thats why motherhood is a blessing and a curse. Good job trying to do things like this on your own. Just when you think it's reached an easier point you'll probably have another baby or something crazy. I hope you make Micah a cloak and a bag. :)