Last night Travis and I attended our last lamaze class.
We decided to do lamaze because originally (pre-twins, that is) I wanted to have a natural birth without any drugs or painkillers and was planning on taking a Hypobabies course (which I still want to do with future children).
But the deal with twins is: Even if I can deliver one au natural the doctor often has to stick his arm up and turn the second baby, which I cannot handle without lots of drugs and actually turns out to be more dangerous sans an epidural than with.
Also, there's about a 50 percent chance I'll have a C-section.

So I didn't want to spend 500$ on a birthing and hypnosis class that I wouldn't use, but I had my heart set on going to some sort of class besides the hospital basics.
Since I know the basics.

(I spend time everyday learning about what's happening to my body and my babies and what will happen when I'm in labor. I think it's really super interesting.)

And I wanted to recommend taking lamaze classes (since, at least in Utah County, they're only 75$ not 500$ and my insurance paid for it!) to all pregnant women and their husbands.
We learned a ton.
It was usually an almost-three hour class, beginning with an hour and a half of questions, teaching about the babies and women and what to expect at delivery followed by an hour and a half of relaxation (aka breathing and massages. LOVE massages!)

We learned super basic helpful things like what to actually bring to the hospital, and more interesting things like what exactly happens to the body during contractions or when your water breaks.
Yesterday the teacher even brought in a placenta! It was totally gross and cool. Some of the pregnant women were brave enough to don rubber gloves and play with it!

Anyway, here's a picture of me at lamaze with one of my new friends, Kristina.
What is interesting about this picture is that Kristina and I have the same official due date: April 6th.
And yet, look how much bigger I am!
She isn't pregnant with twins. 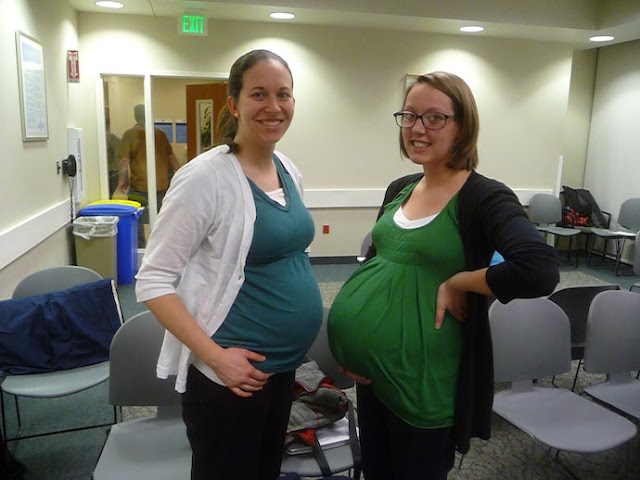 Did I mention that at the doctor on Tuesday he said I was measuring at 43 weeks pregnant?
43 weeks doesn't exist. People have their babies at 40 weeks, with the occasional woman staying pregnant long overdue, to maybe week 42.

If you do take lamaze, let me recommend you don't take it when you're 43 weeks pregnant (or 34 weeks pregnant with twins). Those chairs get less comfortable every pound you gain.

Wow Becky I am sad that I don't get to be in pictures with you and you big belly. I'm so happy you have gotten so far in your pregnancy to 34 weeks! Keep those babies cooking.

I am both petrified and super excited for you. I am so taking a trip to Utah (and dragging other Buffalo friends) to see you, Travis and the twins. I'm so excited to see the babies and hear all about the wonderful things that you are going to teach them and that they are going to teach you. Sending love and prayers your way!

I highly recommend the Hypnobirthing class. That's what we took and I loved it. Learned a ton as well. We'll see if I can actually follow through with all of it once I go into labor.

Becky! First off, Congratulations! Your boys are SO adorable!

Ever since I met you at the Lamaze class (yep - I'm that Kristina!), I've been wondering how you have been and how your delivery went, etc! I found your blog after I found Noelle on facebook (she used to work with my sister). I'm so glad that things seem to be going splendidly for you!