Car seats are for babies

At our hospital all preemie babies and all babies which are admitted to the NICU (and our boys are both) have to pass a "car seat test" before they can go home.
Which means they must sit for 90 minutes in their car seats and not suffocate.
(Because they're so small, they tend to fall forward a bit, with their chin on their chest -which can cut off their air supply).

Today the doctor said, "Time for their car seat test."
Which means we're oh, so close.
In fact, the boys had their feeding tubes removed this afternoon and all they need to do now is prove that they can eat all their meals via Mama. 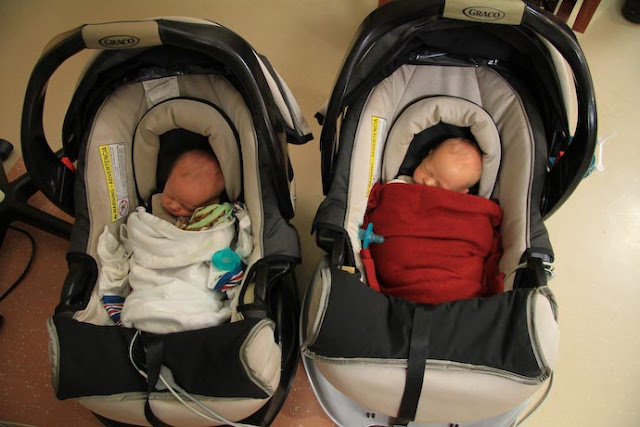 So we're back in the hospital, so they can call us down to the NICU when the boys are ready to eat.

Wednesday will be their 38 week mark, if I were still pregnant.
Yikes. I could have two more weeks of pregnancy under my belt and another two to go if they weren't born until full-term.

Oh, and they both passed their car seat tests.
A+

Yay! My girls almost didn't pass their tests. Lillian's oxygen levels kept dropping and it looked like she'd have to stay. The nurse fiddled with the angles of the seat and the wires and it went back up. Probably not super legit, but it worked! I'm thrilled they're coming home soon! You've been amazing through this whole thing. Really, really amazing.

Is Grey on the left and Micah on the right?
I just got off the phone with Uncle Ken and he reminded me that his daughter Carissa also named their son Micah. Luckily their last name is Bassett and not Pitcher however that was her maiden name. Two Micahs in the family!

Look at those boys so big! Sitting in car seats all by themselves. That is impressive, does that mean that they can be in the air and keep their temp up and everything? I am so excited when they make it home I want to be able to come and visit but finals are coming up and I have that to do so probably not huh...hmm I love you!

They look so cute in their carseats! My Cadence was so tiny, that she kept failing the test. Poor girl...I was very stressed too! Finally the NICU lent us a flatbed. Then she passed and she got to come home with us. We had to bring her back in 6 weeks later so she could come out of the flat bed into a normal carseat and she passed! Micah is a good name there are actually 3 in the family, because my sister's girl is named Mikah (just spelt different)!

Oh, I forgot that Mikah too. Boy I don't know the great neices and nephews very well!

soon you will be home and I will make you waffles!!!!

Its a great pleasure reading your post.Its full of information I am looking for and I love to post a comment...design your own car seat covers at totallycovers.com/au who will help you to enhance the look of your car.

PinkCarAccessoriesShop.com said...
This comment has been removed by the author.
June 14, 2020 at 9:34 PM

Good to know about the car seats are for babies. Buy pink car seat cover, rear, middle or front bench seat covers with best quality and nominal prices at PinkCarAccessoriesShop.com.