Breastfeeding {Part 2} -how we do it

A Saturday post!
Because I want to talk more about myself than just the 5-day week allowed.
I wanted to talk specifics about breastfeeding, and I'm going to use words like nipple, milk and boobs - so Dad, Grandpa, etc: beware:

First, my tool kit:
I use Medela nipple shields 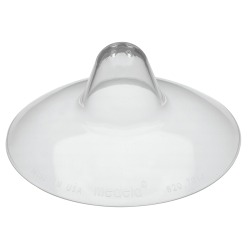 I saw someone else using them when I was pregnant and thought "Your breasts aren't as good as mine, because I don't need that plastic crap. I will breastfeed and be awesome at it."
Because yep. I'm seriously that stuck up and bratty. I'm really embarrassed that I thought that, but I will admit it because these little shields got my babies home.
Nipple shields are used for a variety of reasons, flat or inverse nipples, babies with a bad latch, to help protect nipples that are sore or cracked (or even blistered!).
We used them because 1. our boys were so tiny that their mouths were too small to latch and the shield gave my nipple an easier shape and 2. the boys had to work so hard eating that breastfeeding burned more calories than it provided and the shield made the milk easier to pull out - more like a bottle nipple.
Now we still use them because I've been lazy about weaning the boys off them, and they're used to using them - so I just let them.  The only time it's been a problem is when we got the boys circumcised Grey was having a complete meltdown and I wanted to calm him by putting him at the breast, but I didn't have my shield and he was so frustrated that he couldn't latch and then just got more frustrated and couldn't latch more.
It was pretty much horrible.
But now I make sure I always have them when we leave the house.

I also have three boppys, including the {giant twin boppy

}, which is more like a table than a pillow. 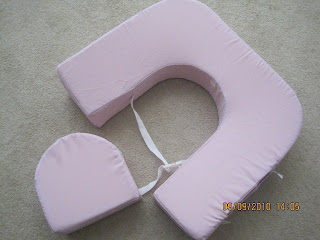 It is beyond awesome. I tandem breastfeed (aka breastfeed both babies at once) for every nighttime feeding and the occasional daytime feeding and I could not do it without the twin boppy.
When I have tried to tandem feed them with a regular boppy or just using pillows they both end up soaked and angry, and hungry after an hour of "trying to figure it out."
I just always football hold both of them. The only problem is, it's really hard for me to tandem feed by myself, which is why I do it at night (because Travis can help me).
I can get both babies up and nursing by sitting on the bed with them in front of me or on either side, and then I lift them on to each side one at a time.
Then I focus on latching whichever baby is angrier first, and then the other and we're off! The difficulty arises because the nipple shields work a bit like a bottle and the boys end up getting a LOT of air, and need to burp two or three times each, and I just can't figure out how to burp them by myself yet.
Since both my boobs are exposed (and have shields attached) I have a hard time propping the baby up over my shoulder, and no matter what  I do, the baby who's still trying to eat always seems to get my elbow in his face.
Travis prefers for me to tandem at night too, since he can mostly keep sleeping through feedings, and just has to sit up and burp a boy every once and a while, but if they were getting bottles I'd make him work more.
When I'm home alone I bottle feed one baby and breastfeed the other, and Travis took my picture doing that yesterday so I could show you: 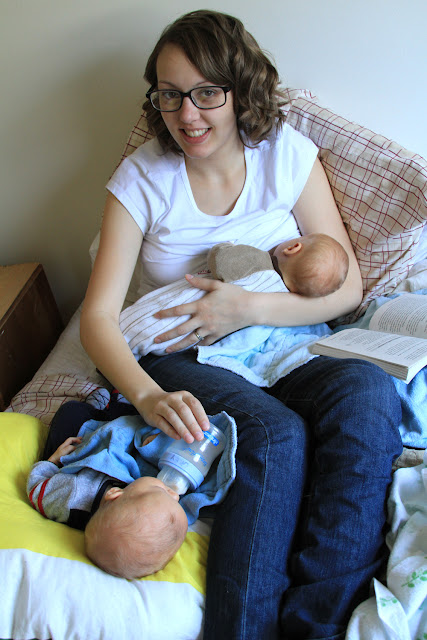 So I prop one baby up next to me on the couch or bed inside the boppy and bottle feed him while I breastfeed the other boy.  While I was in the NICU the lactation consultant recommended that instead of tandem feeding both and then bottle feeding both and then tandem feeding both then bottle feeding both (etc) I should let them each get some one on one breastfeeding time. It's helped them get better at eating - because I can pay more attention to helping them - and honestly it's my favorite time (when Travis or someone else gives the other boys his bottle) and I can just sit and focus all of my love on the tiny boy in front of me and nothing else. It's our number one chance to get mama-baby time and I love it. 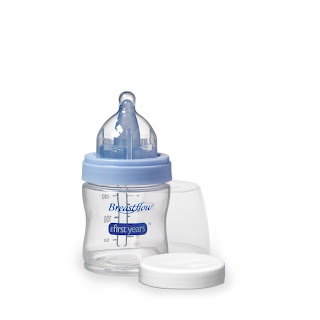 And when we bottlefeed we use the Breastflow Bottles

and we love them. They actually work more like a breast than a bottle, so it's harder for the babies to suck the milk out and they have to work their jaws and tongues the same way as if they're at the breast, and it takes a few seconds of sucking before they get anything -which is also like the breast.

I know a lot of babies get used to the easy, instant gratification of the bottle because when they're hungry they get fed immediately and the milk literally just drips out, but because these bottles are such a pain the boys still prefer the breast to the bottle, which is actually really comforting. It helps me feel more like a mom and less like a milk cow to know that they want me and not just the nourishment I can provide them.

I know that a lot of women have difficulty breastfeeding twins, and have been super blessed that things have gone so smoothly for us. I've even started to realize that as hard as being in the NICU for 18 days was, I probably wouldn't have gotten so far breastfeeding if I wasn't there for every feeding, surrounded by nurses and lactation consultants cheering me on and helping me.

So the NICU was a blessing in disguise.
Anyway. That's how we do things in the Pitcher casa.
Now go out and enjoy your Saturday instead of sitting around on your computer!

Posted by Becky Pitcher at 9:49 AM

Hi Becky! Just found your blog yesterday, and I'm hooked! Love your writing and the photos of your beautiful little boys.

So glad that nursing pillow is being put to use since I only used it about a couple dozen times! I think my failure to breastfeed my girls had made my determination to do it for baby #3 (who is not even on my radar yet...) for at least a year.

I should have done more bottle research too. My girls were NOT patient enough to nurse and it ended with all 3 of us in tears. It was horrific.

I'm continually impressed by you. Really, you are a super mom!

You're doing so well! I remember how challenging it was to breastfeed two babies, and you are rockin' it.

LIke i told you before...all those extra nurses helping for so long was AWESOME. I had 3 days (only 1 with actual milk...and only had the pump for one day before I left) And all I had was different nurses shoving babies on my boobs and then feeding them with bottles. I was so confused when I got home about what i was supposed to do. I actually cried when I left the hospital because I literally wasn't ready to bf them on my own with the info I'd gotten.

So proud of you!

Wow your even curling your hair. That's great, you must be getting more sleep since your not in pj's and your hair is done. Yeah! Let me guess, nursing Micah bottle feeding Grey? I have pictures at home I can't tell who is who on, it makes me sad. love you

I just finished breastfeeding a couple months ago (just one one-year old), and have to give you props: you are a rock star! One was hard but you are doing a great job, and I'm sure this post is super helpful to many! I think I will be referencing this again whenever we have a second baby.
PS-You have 200 followers! Yay! :)

You are amazing! I remember the first few days of breastfeeding feeling so impossible, but it's that "don't give up" mentality that gets mama's through. You definitely have it!

My babe is three weeks old, and we are going to start pumping soon. I have been nervous about what bottles/nipples to use so thank you for your recommendation!

can you recommend your breast pump? I really want to breastfeed my twins (due in July) and you are inspiring me! I have no idea which pump is the best!

Hi! Very good to know in case I ever have twins. Lol. It is genetically my turn... O_o New follower from the Spearmint Baby Alexa blog hop! :-D Have a great day! www.MeasuringFlower.com

Okay, we use the Medela Symphony Pump, because it's the one from the hospital and WIC, but we're renting it because it's seriously like 1,600$.
But Medela is the way to go, and they have lots of pumps that are only 200-300 dollars.
Look at Babies R Us, but don't buy one there full priced, they send out coupons like every week for 20% off pumps.

Hiya, I just found you via Top Baby Blogs. I love Grey for a name, would never have thought of it myself! I'm impressed with the breastfeedng twins thing, am always curious as to how mums get on. Do you pump the milk for the bottle feeding or is it formula?
Would love for you to visit us
www.hannafrancesca.blogspot.com

My three-week-old twin boys are struggling at the breast and we've been bottlefeeding one (Elliott) and cup feeding the other (Miles). Those bottles you're using looked so good, though, that I ordered the starter set and they just arrived. We are excited to give them a try!