Travis is the master over the babies.
I can spend two hours rocking and pacifying and swinging the boys to sleep, and finally tiptoe out of their room certain that this time they won't wake back up.
And they do.
They always do.

But hand Travis  a baby and he knocks it out! (In a very non-violent way)
I have to go wake him up sometimes and say "Please put this boy to sleep, I've been trying for 45 minutes to get him to stay asleep in his bed."
Travis is always back within 15 minutes and the baby in question is always out for the count.

And he thinks he can leave!
In the next two months he's going out of town for over two weeks.
Two weeks!
Doesn't that man know he has twins!?


He's going to leave me alone with twins!
He has already gone out of town since they've been born (I'm getting really sick of his work sending him places) and it was really hard, but that was with my mom and sister here.
No one else can soothe the babies to sleep like he can.
I'm going to turn into one of those neglectful moms whose babies have flat heads from being in their carseats all day.

And lots of people keep offering to help, but maybe they don't realize that the help I need most is getting up every 3 hours in the middle of night and burping my babies when I hand them over part-way through nursing.
And then put them to sleep while I stay in bed and whine about how tired I am.
And that sounds a lot easier than it is.
And it's pretty much impossible if you have your own children, social life, or house.

Anyway. I'm freaking out.
And also, this baby is Micah.
8 of 11 people guessed right, so maybe they're not as identical as we were told. :) 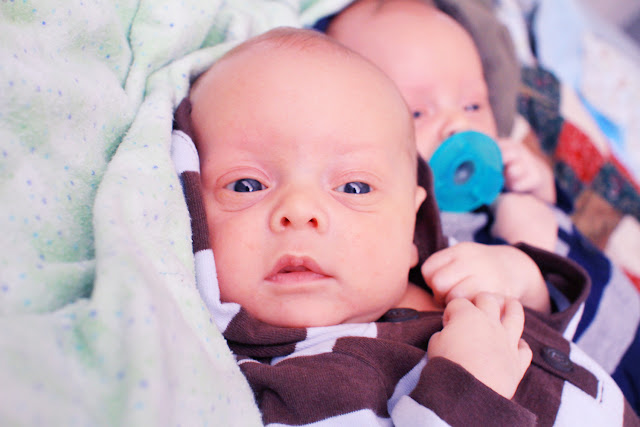 And we're climbing the ranks! But we need your votes! Just a'clickety click on below:

You can do it :) Chikezie is pretty worthless at night so there were lots of nights I just did it all myself and then all day when he was at work.

At least you have family close to help!

Montana is lovely this time of year.

I can totally say I understand and mean it! Richard had to go to school in Calgary (2.5hrs away) for 8 weeks when my triplets were 8 weeks old. It was crazy times! I ended up moving me and the girls to my parents house. It was hard but we survived. Good luck. I have to say that i think Grey has the "pitcher" forehead and that's how I can tell the two apart. They are so cute!

You know our offer is still open. Why not take us up on it. We would love to have you move in with us while Travis is gone even though we know it's not ideal. Try it, you may like it.

I have the same issue! He is such a stinker and I'll be up for two hours trying to get him to sleep on my own. I have to admit defeat and ask daddy to pat him to sleep. Though it is nice when sometimes all he wants is to breastfeed and fall asleep that way.

You started out great putting them in their beds. He's slept with us the past 13 days since he was born and that's a BIG mistake. Now I can't get him to sleep in his bassinet or crib.

You may want to take people up on the help just so that if you're up with them all night you at least have someone to care for them while you sleep for a few hours the next morning/afternoon :)

I could tell it was Micah because he (being that he was the wee-er of the two at birth) has those distinctive I-was-very-tiny-once eyes. A tiny bit buggy, but only in the cutest way. Two more months and I betcha those will be gone and nobody will know the difference between those two!!

Re: travis going away: sounds rough, but you can do it!