It's a good thing it's Friday.
Here are some random things for you to take away for the weekend.
Yesterday I asked "What's the date?" and my mother-in-law said "May fifth."
Then I had this conversation in my brain:
May fifth.... the fifth of May. There's something on the fifth of May. Is it someone's birthday.... no. I don't think so.
Is it a holiday? What holiday could it be? May fifth....
It wasn't until I heard someone else say "Cinco de Mayo" that I realized that May fifth is MAY FIFTH, but in Spanish. Duh.
So no. We did not celebrate Cinco de Mayo over here.
We didn't even know it was Cinco de Mayo.

Yesterday I went to the Beehive Bazaar with my friend Lana, and I felt grouchy because it was awesome. It was essentially a great big room filled with creative people and cool things they made.
If Etsy was a store in real life it would be the Beehive Bazaar.
I felt grouchy because lately I have this craving to craft. I just want to sit and sew all day, and (as you can imagine) it's not happening. 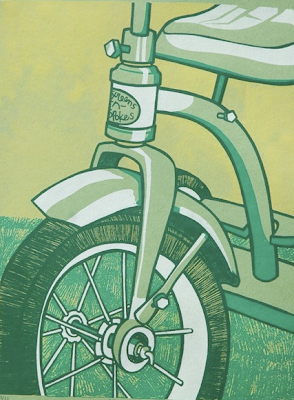 I bought this print (but in blue, not green) for the boys room, since we started the nursery before the boys were born, but we didn't move into this apartment until I was already 5 months pregnant and it's actually really hard to design a nursery (or do anything) when you're 5 months pregnant with twins.
And even harder at 6 months.
And then 7.
Etc.
But now I'm trying to make it cute in there.

Today, May 6th, IS a holiday or a birthday.
It's the golden birthday of my littlest sister Kathryn, because today she is 6 years old!
She is seriously the cutest thing ever, and the boys are so lucky to have her as an aunt. She is going to be the fun aunt - believe me.
I'm going to write a post about her next. A separate birthday post.

When I write that my babies are trouble at night they always do really well the next night. (I think you must be praying for me, so thank you.) And, since I don't want to jinx myself by writing how awesome they are... I won't tell you how well they did last night.
Or didn't do.
You know.

Also, the babies are really starting to get the hang of smiling. It's so CUTE.
They smiled a bit before now, after they were fed and content, but now they smile at us. On purpose.
I'm sure of it.
Especially Micah,  he'll pull off nursing and turn to look at me and just smile, smile, smile.
Oh my goodness. It just melts your heart.

The boys have also decided that they're only happy when they're out of doors. The babies who refuse to go more than 1.5 hours between feedings went on a 2.5 hour walk yesterday, and only came home because the grown-ups thought it was about time.
Seriously. They just like to snooze in the sunshine, whether in their stroller or on the grass.
We managed to trick them briefly by placing them in the window, but it just wasn't the same and somehow they knew it.

I want need some new clothes this spring. I went through my closet with an iron fist and the rules were these: throw away anything you haven't worn in 6 months (the last 6 months excluded -since I'd only be left with maternity clothes). Throw away anything you've had since high school. Throw away anything stained that you just keep in the hopes that the stain will magically disappear. Throw away everything you bought with the intention of altering. It's never happening now.
I have been looking constantly for spring dresses but I'm not going to pay $70+ for a dress, which is how much everything seems to cost.
My wedding dress cost one hundred dollars. I'm not going to pay 100$ for a regular ol' dress.
So where do you shop online? (Since making it to the mall is mostly out of the question) I need your help!

Anyway.
Today is Friday.
That means that I'll have Travis most of tomorrow, which maybe means I'll be able to dig into the fabric that's piling up in my craft room (since I can't sew, I just keep buying fabric. I have high hopes...) but most likely I'll dig into bed and take a bunch of naps tomorrow.
Mmm. Naps.

Don't forget, there are 6 days left to enter the Mama Mandolin Giveaway. Click {here} to enter, or the link on the sidebar --->

Forever 21 has some stuff for cheap online. I've found lots of summer dresses there for $20 or under. Or at least something I can wear with shorts or leggings underneath.

Target doesn't have much good stuff lately but when I walked through I saw lots of sundresses. I'll probably be wearing those all summer until I lose the little bit of baby weight that is left. They have lots of funky prints! And usually JCPenney's has cute dresses too.

I knoowwwww something you might liiiiiike: you can now shop at h&m online. yeah.