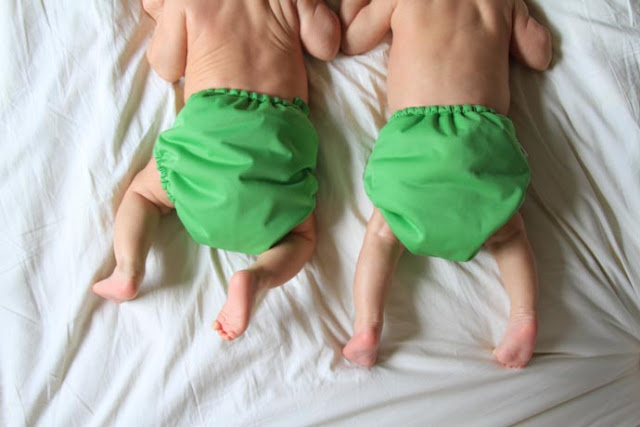 (If you're wondering, I have no plans for a forthcoming {part two} but I suspect this is something I will revisit many times.)
I've had lots of comments lately that essentially say "I'm excited to hear how cloth diapers are going," but I put off talking about them because I still don't really feel qualified to talk about them.
Which is silly, but here's why:
Reason 1: We still only use cloth diapers about half the time.
If we go anywhere, I put the boys in disposables.
At night I put them in disposables so I don't have to change them -since babies can sit in their pee for like 12 hours with disposables, but not with cloth.
And this last week I've had them in disposables around the clock because Travis was gone and I was doing a lot on my own, including laundry, and I just couldn't add one more thing to do by myself.
Usually it doesn't matter, since I do laundry pretty much around the clock (these boys go through  A TON of clothes, blankets and burp cloths a day), but I haven't done my laundry and am just doing a load of their clothes every day or other day.

And Reason 2: Until this week, my boys didn't really poop. I mean, they would each poop about once every 4 or 5 days, which is apparently totally normal for breastfed babies.
When they did poop, it was almost always early in the morning or in the middle of the night, so they were pooping in their disposable diapers 90% of the time, so I hardly ever had to clean poop out of my cloth diapers.
Suddenly, this week and last, they're pooping like crraaaaazy (which is also apparently normal for breastfed babies... sensing a theme?) They poop every single day.
Which doesn't seem like that big a deal, except that it is SO MUCH POOP every time. And it smells like the worst stinky french cheese in the world.
Which is all very strange.
But, as you may recall, I've had them in disposables this week. So I'm still not really cleaning poop.

I do know though, that the poop of babies who aren't on solids can go straight into the wash. No toilet dunking.
Sometimes when I have had a really poopy diaper in their cloth diapers, I just wipe the diaper with a piece of toilet paper to get rid of all the extra stuff before sticking it in the wash.
Really, it's not grosser than wiping the poop off my babies' butts.
We don't have one, yet, (but now that the babies are pooping more I'm planning on buying one this week) but they have these sprayers that hook to your toilet {see one here} so if there really is a ton of poop you can just spray it off. 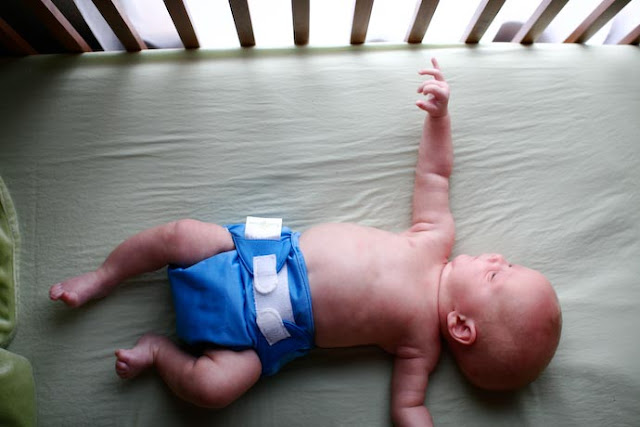 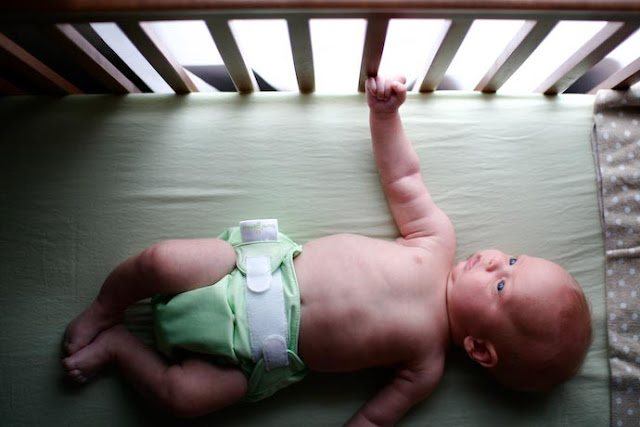 This post is already long, but here's what we usually do around here:
After the boys' first morning feeding (aka as soon as it's light outside) I put them each in a cloth diaper.
Since they usually eat about every three hours from 6am to 8pm, and I just change them after every feeding they each go through 5 or 6 cloth diapers a day, more if they poop in the middle of the day.
We have a dozen diapers, and they're all pocket diapers {these ones}.
I bought some prefolds, but they were just HUGE on my boys. Maybe when they're older they won't seem so bulky, but for now we're sticking with pockets.
I just change the boys where ever I happen to be, and set the diaper aside. Then the next time I go to their room, I stick the diaper in the 10gal bucket that we use for a diaper pail.
At night, when the boys are in their disposables, I put all the dirty diapers in the wash. I wash them once on cold -no detergent, usually while we're in the process of putting the boys to sleep.
Then, after they're asleep and before we go to bed, I add a bunch of baby clothes to the diaper load and wash them all together on warm with regular ol' Tide, and I set the machine to do an extra rinse cycle at the end.
I know you're supposed to use special diaper detergent, but I don't for several reasons:
1. It's really expensive.
2. My friend Brittany uses Tide and has had no problems.
3. I read somewhere that if you have hard water (we do) it's better to use regular detergent. (This may or may not actually be true)
4. Micah has a rash and scaly dry skin all over his body, and it's lessened if I use regular Tide, as opposed to the baby, soap-free, dye-free, fragrance free detergent. (I know that seems backwards, but I'll do what works).
5. Since I wash them with the baby clothes anyway, it seems okay to use regular detergent.

Then, when I inevitably get up in the middle of the night to feed the boys I just switch the laundry loads to the dryer.
I take out all the shells (the outside, colorful part of the diaper) and drape them over our kitchen chairs and the swing, and then tumble dry everything else.
In the morning, I have all fresh dry clean diapers.
I guess it would be easier if we had twice as many diapers, so I didn't have to do laundry EVERY day, but since I need to wash the boys' stuff every day anyway, it doesn't seem like that big of a deal. 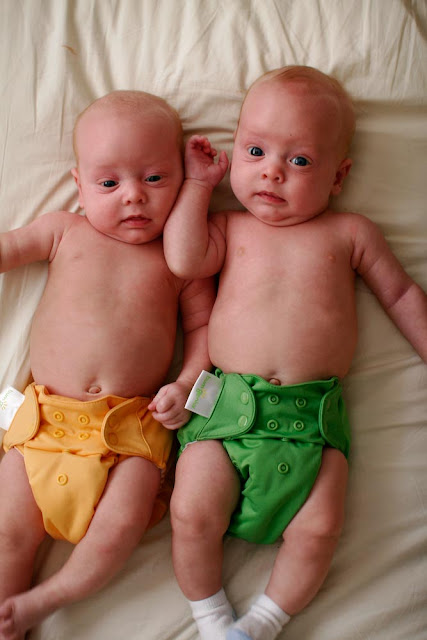 So far we love the diapers.  Even using them only half-time has already saved us a ton of money, since I refuse to buy any diapers besides Pampers, because everything else is all so scratchy and they leak!
The boys are in a pretty big setting with their cloth diapers, because they're such long babies that their little butts hang out if it's not big, and because I feel bad when they have little rings around their legs from the diapers being tight.
However, because of that we have had a few leaks, but we've had more while they're in disposables. My boys are HEAVY wetters.
It also isn't that much harder than disposables, and it makes me feel like a really good mom when I actually use them. I know they're better for my babies' bums, and for the environment, and for our checking account. The pain of doing one extra cycle on the washing machine is totally worth the little confidence boost it gives me.
And really, the main reason I wanted cloth diapers so bad in the first place is because they're freaking adorable.
And they have yet to let me down on that front.
If you have any questions about the diapers then leave them in the comments, and I'll try to answer in the comments. 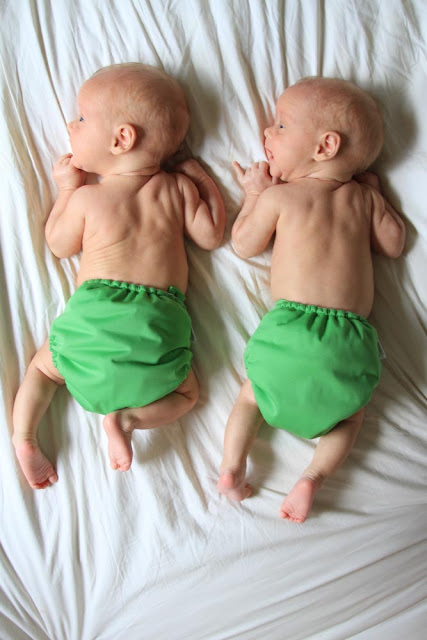 Posted by Becky Pitcher at 3:09 AM

I love this. So much. We don't use them full time either, but noticed the savings the first week. It's really nice to be throwing away 15-20+ diapers a day. :)

I totally give you props. We do cloth diapers...for the most part. Not at naps or night time (too much peeing). Not when we're on vacation. Not usually when we're out. So, I guess I would call us part-time cloth diaperers. :) I guess it will pay off for baby #2 (whenever that happens). :)

I have an almost 15 month old and a 8 day old new born and I CANNOT wait to put my newest baby in cloth.. he just seems too tiny for them yet, but it KILLS me when I see how many diapers he goes through in a 24 hour period!

I also wash mine with tide &pretty much do it the exact same way you do! As for the poop thing, wait until they move up to solids... it's disgusting cleaning huge poops out of those things, but I swear by the diaper sprayer! :)

What does your standard diaper stash consist of? Or I guess - how many do you go through in a day? I am expecting twin boys in October and I want to cloth diaper, but unsure of how much I need to buy? Thank you for your help with this.

You're right, they look adorable!!

We go through 10-15 diapers a day (excluding night time). So with only a dozen diapers, we usually have enough to make it through the day, but not always. Today, for example, the boys were both in their second diapers each by 8am. So today we'll probably go through a lot.

Welcome to the world of fluff!

I've currently got three in cloth, including the twins, so we're definitely committed full-time. I promise it ends up being easier than dealing with two systems! Just my two-cents :)

I also have a couple of tutorials on my blog, if you're interested. Would love to be a resource for you, if I can! You're definitely making a great decision by breastfeeding and cloth diapering these babies!

love reading your routine! I know nothing about cloth but started buying stuff, and just started...we are liking it so far...but still doing disposables at night and on-the-go.