This morning, after I already posted on the blog, I realized that today is the boys' monthday! They were very crabby, but I forced them to come be photogenic, which is why we only ended up with a single decent photograph of them together. But lots of cute ones on them by themselves.
We take what we can get. 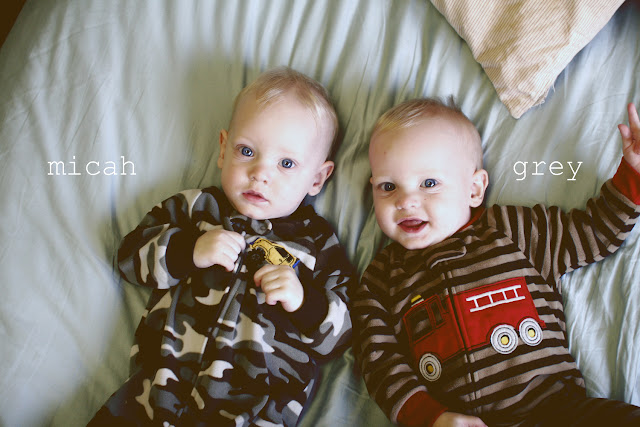 Ten months. It sounds a lot like twelve months. Which is one year. Which is SO old.
The other day, Micah had his toothbrush in his mouth and was walking wobbly through the bathroom (picture a zombie, arms out, poor balance), and Grey was sitting in Travis' lap watching him and Travis said "Are we even going to remember them being like this?"
"No," I said. "Why do you ask, because you saw all the pictures from the last year and you'd already forgotten what they were like as babies?"
"Yep."
"Me too." 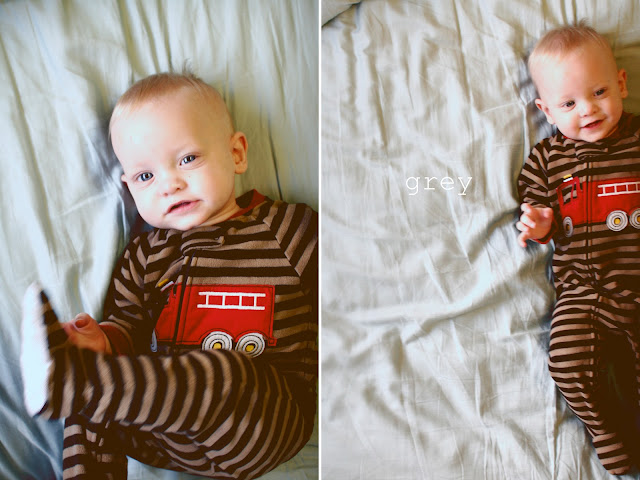 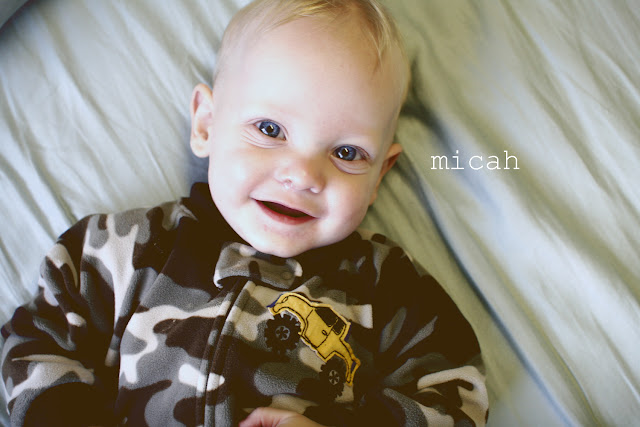 Because they really aren't babies anymore. They're little boys. They're toddlers. They sit with us and eat their meals in their new high chairs, with their new teeth.  They walk around the house, taking five or six steps at a time and then leaning against a wall, or squatting down for a little break and then they're up again, moving.  They play and chase, they tickle, they laugh, they high five. Micah is trying to figure out clapping and Grey has finally gotten a handle on waving. 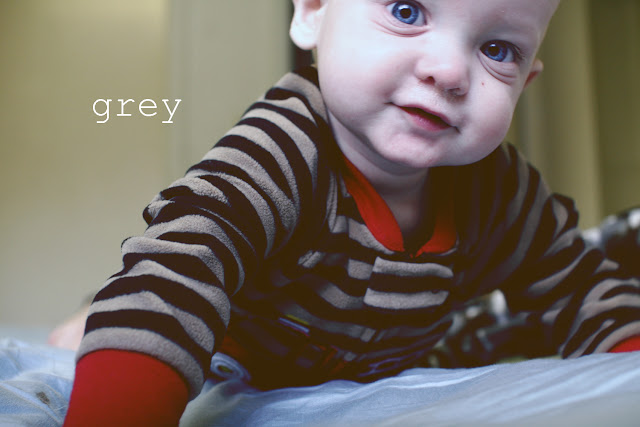 In the last few weeks they've become interested in looking at stories, but I don't know if that's because they're growing up and changing interests, or if it's because we got so many new books for Christmas that they like more than their other books.  They especially like to look at pictures, and I think that they are starting to recognize that photographs can be pictures of people they know.
Micah is obsessed with pointing at things and touching with his index finger, and he'll look at a picture and move his finger across to each face in the picture. 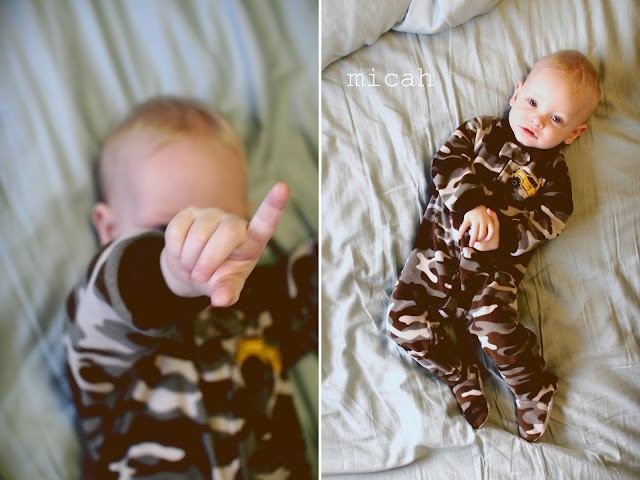 Micah is also completely in love with Travis. He is not even remotely interested in me. Micah says "Dada," which is especially adorable, because it's really his only word. But he puts inflections in it! He knows how to make it sounds like a question or a demand. It's amazing! Here are some stories about Micah saying Dada. First of all, when Micah falls or gets hurt I go to pick him up, but if Travis is  home Micah will push me away, and yell "DADA! DADAAAAH!" The message is pretty clear. I do not want you, mom. I want Dad.
Then I was telling a friend about how much Micah loves his dad, he always wants Travis to hold him, he's always saying Dada, etc. and Micah looks up at me and asks (seriously, sounded like a question) "Dada?"
Yep. We're talking about your dad. No, he's not here.
Then, Micah was sitting on Travis' lap while Travis was eating cereal and watching skateboarding videos the other morning.  I walked by and Micah was just beaming. He had the biggest smile on his face, and kept looking up at Travis' face.
"What are you two doing?" I said.
"Dada!" yelled Micah. It was adorable. There was so much excitement in his voice. It was like he yelled "I'm on Dad's lap!"Except that he doesn't know all those words, he just knows Dad. 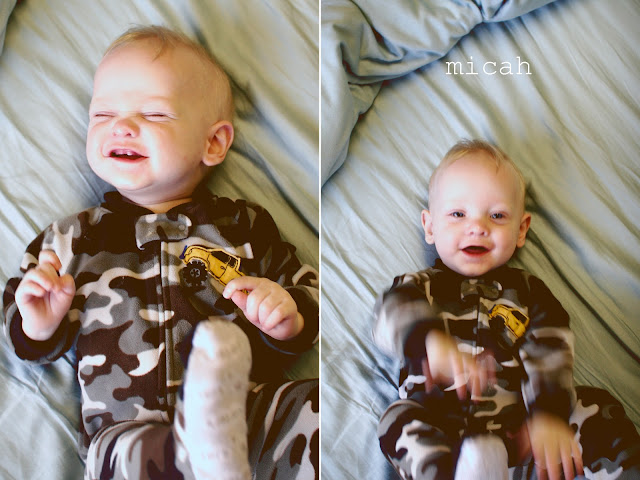 Grey, on the other hand, still doesn't say any words. He says Dada on occasion, but I'm not sure that he's actually saying "Dada," and not just making sounds. Instead he's just become.... loud. He yells. Bellows.  He punches the ground and acts like a gorilla on the rampage.  You know that screamo, heavy, frightening music? Grey sounds like that if, for example, we make him sit in his car seat... minus the guitar. I don't think you're getting it. It's not like "Boohoo, I'm sad" or "I'm hungry," or "I'm hurt," it's more like "I AM THE FREAKING HULK AND IF YOU MAKE ME SIT IN THIS CAR SEAT FOR ONE MORE MINUTE YOU WILL REGRET IT! ARRRRGH!!"
But that's not the only noise that Grey makes. He's also become a singer. He Oooh, Ahhs, and Mmmmms every time that music is playing and he seriously belts it during hymns at church. He isn't terribly interested in playing the piano (although Micah loves it), so I'm not sure who will be the more musical of the two.
Grey also has started running. He obviously can't run by himself, but if someone is holding his hands - he books it! He starts moving and kicking his legs, propelling himself forward at ever increasing speeds.
And like Micah now loves to touch things with his pointer-finger, Grey now loves to touch things with his right foot.
If he's holding on to something or someone, he'll stand on his left leg and kick and feel things with his other foot. It's so funny! He even takes extra big steps with his right foot.... Hmm. Maybe we have a soccer player?
Micah, on the other hand, is probably a basketball player - judging by how much he loves the basketball. He rolls it around the room, and then sits by it smacking the top of it. I'm pretty sure he's try to copy Travis dribbling. 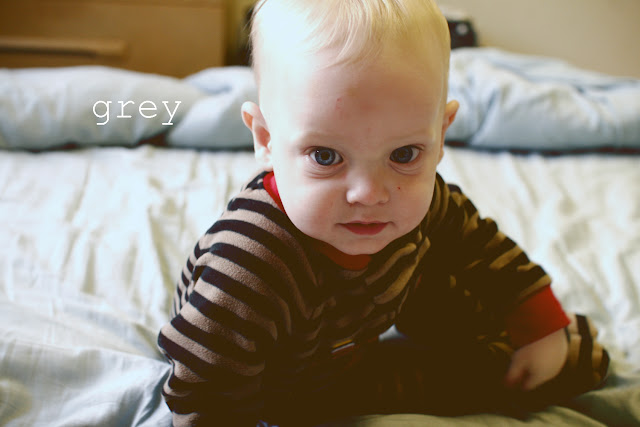 They have also both become really clingy and yet also independent. Our doctor put it best when he said "Ten month olds want to be completely independent, as long as Mom is right there beside them." They want to pet puppies, they want to eat new foods, they want to go to new places - but only if Travis or I is right. there. They spend their days in one of two moods, 1. where they want me to hold them, kiss them, tickle them, and feed them Cheerios, and never, ever -under any circumstances- leave the room, and 2. where they want me to stay on the couch and stop following them, already! into other rooms, while they play, and while they crawl around -clutching a fistful of crackers and cereal.
They will crawl into my sewing room and I'll follow to make sure they don't get ahold of anything that's not fit for babies. I'll hear them laughing, playing, talking, banging things and the moment I stick my head in the room they freeze. They look up at me, with raised eyebrows. "What do you want, Mom? Stop looking at us." 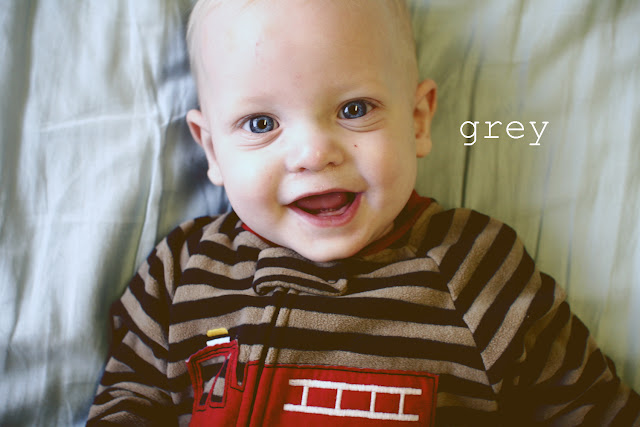 They have new favorite toys. Grey's favorites are probably a tie, between the little wagon he can push around the house and the mirror in my sewing room that he can french kiss himself in. Oh, did I mention that he's completely, 100% obsessed with kissing himself in the mirror? Because he is.
Micah, on the other hand, would rather french kiss their baby doll, stuffed snowman, sock monkey, or anything at all with a face - including all his family members.
It's.... wet. They're wet kissers. Even if you get it on the cheek, you have to wipe off slime from that little tongue. But at least we know they love us, right? 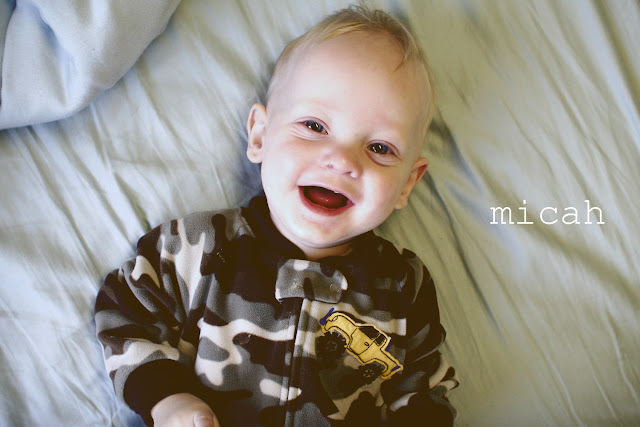 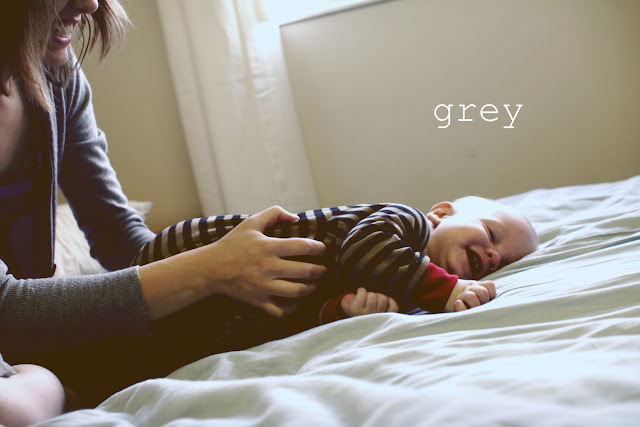 You guys, it's hard to remember what they could and couldn't do a month ago.... I think this is a good recap.

Holy Cow!!! The months have FLOWN by! They are getting so big, Becky. You can tell their personalities are developing in all of the photos you share. So cute.

Becky, I need you to know that I LOVE your blog. I stumbled across it through an obscure series of facebook interlinks, and I. LOVE. IT.

You make me excited to be a mom. You manage to let your love for your family and motherhood just radiate through everything you write and photograph. Even when things go horribly, horribly wrong (as they inevitably do with kids!) you maintain so much hope and love.

Thanks for inspiring me.

Oh my goodness they are getting SO big! I love their hair! Rylin also likes to French kiss herself in the mirror!

just found your blog a few days and already addicted. you're an amazing mama and your little boys are so cute! plus you're pretty darn funny.

wish you didn't live so far away- i think we would totally click! we live in san diego and i'm 21 years old and my husband is 22. we both want to be parents so bad!

love how micah is all about his dad. too cute :)

You have beautiful smiley babies. :) Love to read what they already can do and how big they already are.
Before you know it they will ask to go out to parties.