My babies are not babies.
I still call them babies every day, and almost every time that I say it, I shake my head and say "Boys, I mean boys."
They aren't babies even a little. Even at all. 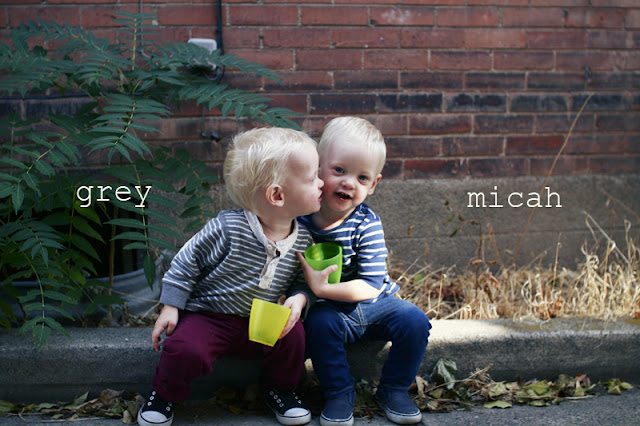 I feel like they have learned so much, and are so much better at talking and communicating, and a lot of it is due to our little neighbor. The boys hear her talk, and then suddenly they can speak, too!
Every single time that I give anything to the boys, I say "Say Please!" and they say nothing, or they scream "MAMA!" like they can't believe that I'm keeping things from them. But the other day, I had some treat (banana bread, maybe?) and said, "Say Please" and Elanor instantly said "Please" and I handed her a slice.
Micah and Grey both turned to stare at her for a few seconds, then they turned to me, and they said please!
Grey had said "please," maybe four times, but Micah had never said it. Then when Elanor said "Thank you," the boys repeated her.
Today, for the first time ever, Grey said "Thank you" at the proper time, without being prompted.
It was so sweet! It makes such a difference for them, being around other kids (besides each other.)
Some other words they've learned? Poop. Socks. Head. Blue! (Like Blue the puppy, from Blue's Clues.) Yep. And the other day, someone said "That's Pooh and Owl" and Micah said, "Whoo-whoo!"
So apparently, they know what owls say.  They've got Head, Shoulders, Knees, and Toes down, as long as we play it veeeery slowly. Micah now loves to say "Buh-bye!" and wave. He does it when he's leaving, pretending to leave, or trying to get other people to leave. It's pretty cute.

They both get really frustrated, and sometimes when they're mad they'll hit their brother or friend, and then they hug them immediately. It's really funny! They're instantly sorry. But that's not always the case. Sometimes they are still mad, and if I say, "Don't you hit him!" they'll often hit themselves really hard on the head! Does anyone else's kid do this? They just need a way to express their anger, I guess... 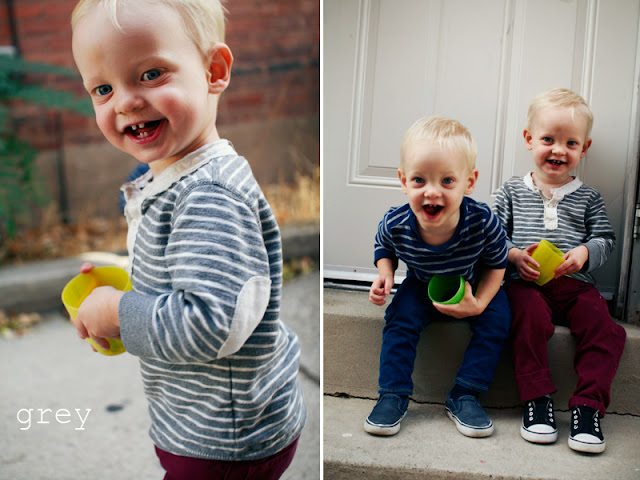 Suddenly they love tv. SO MUCH. It's driving me crazy. They want to watch it all the time. If they can see the iPad, they scream until I turn on a show. They know how to turn on the tv, and if Netflix is already pulled up, they can use the Wii-mote to start Blue's Clues. Yeah, they can. It's the worst! They also know how to turn on and unlock the iPad, so if Netflix is already up, they just press the "play" button on their favorite shows.  I'm still trying really hard to force them to only watch boring shows. Curious George and Blue's Clues, never Yo Gaba Gaba or Sponge Bob.

Grey likes to SCREAM as loud as he can when he's happy. It's earsplitting, but really funny! He's just so excited, that I feel bad scolding him. Sometimes, he and Elanor will stand outside, happily screaming at each other and pausing to giggle and tickle each other. It's pretty darn cute, albeit noisy.

The boys now love to pray. We pray in the morning, before every meal, and at bedtime. They always fold their arms, and Grey especially delights in being the most reverent of all. He bows his head so low that he puts his chin against his chest and hunches his shoulders. Sometimes, if there are a lot of people around (he likes for us to be impressed with him and his reverence) he'll try to curl into a ball (by bowing his head so low) and on more than one occasion, the top of his reverent head will end up in his dinner. It's so cute! Micah likes to "sneakily" watch us during prayer.  He tries to eat his food, to see if we will notice or scold him, and he thinks it's funny to hold things while still keeping his arms folded, and will laugh in delight if he manages to hold his cup to his mouth while his arms are crossed. It's the best thing ever. 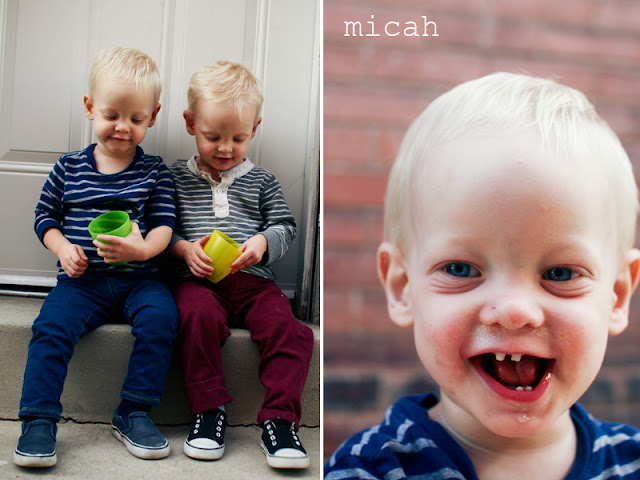 Time-out has been really successful lately! Here's how it works: If the boys do something like hit or push, they go straight to Time-out without any warnings. It's a corner in the living room, where they can usually see or hear the rest of us still having fun. That makes them mad. If they do something like throw play dough or tear a page in a book, I get down and look them in the eye, and say "Please do not throw your play dough, if you throw it again, you will have to go to Time-out." Then, if they do it again, I pick them up and put them in time-out, and I say "You are in in Time-out because you threw your play dough, and I told you not to throw it."
After about a minute or so (I don't time them. If they seem to be really freaking out, I don't make them stay as long - if they don't seem to care, I make them sit there for longer, but it's usually less than 2 minutes.) I go get them, and before they come out, I say, "You are in time-out because you threw your play dough, so please don't do that again. Okay?" Then we hug, and usually they don't do that again (for a while, at least).  If we are outside, and they are doing something like dumping sand on their brother repeatedly, we do the same process, but I make them sit on my lap, and I fold my arms over their arms so that they can't move - and for some reason this makes them really mad! They usually like to sit on my lap, but they hate when I pin them there.

They also don't care as much when I wipe their noses. Micah even brought me a tissue the other day, so I could wipe his nose. SCORE! The way that I tricked them into this, is that for an entire day, whenever I wiped their nose, I gave them a piece of candy corn. Then the next day, I didn't give them candy, but they had already learned to let me wipe their crusties away! GENIUS. I am a genius. 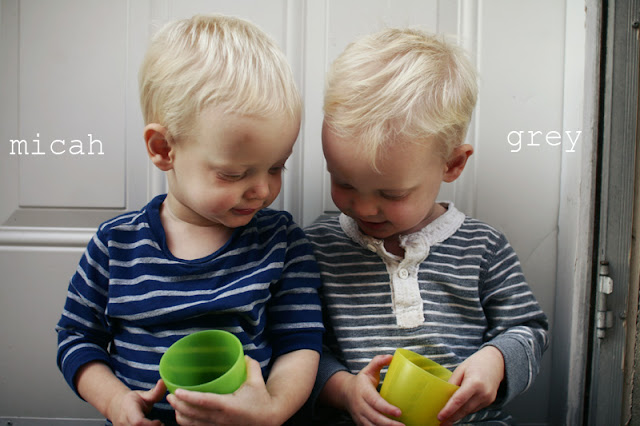 Somehow, the boys have learned the meaning of "turns." If they are screaming, pulling, and fighting over something and I say, "No, it's Grey's turn." Micah will back off and stop freaking out, and watch his brother have fun - and vis versa! The trick is to have short turns, and let them each have equal turns, and to always end on a "Mom turn," if possible.
Like, "Now it's Mom's turn to ring the doorbell! Great, now we've all had a turn, and we can stop!"

Lastly, the boys love "helping" now.  After they eat, they will often go get their broom and a towel, and try to clean up the floor under their seats. Almost every time they spill something, they will get a towel to clean it. They love helping carry the groceries in, and the recycling out. Grey can lift an entire gallon of milk, and he carries it inside (with a little help)! Micah likes to pick up crumbs and throw them away in the garbage. And both of them love cooking! They ask to get their aprons on, and sit on the counter, stirring, pouring, and watching. Already, they are better about eating food that they help cook.  I made Sloppy Joes the other day, and they were spooning it out of the pan and eating it hot! Usually they hate meat, so it was kind of a big deal.
Oh, one more thing: they love eating food on other food. Make sense? So they like to eat their eggs on toast, and they prefer their beans on chips, and their cheese on crackers. It's really cute. And funny. And I definitely did not overuse those words in this post.

I am so so so excited for all these milestones. But I will admit, I will always call them your babies... even when the babies aren't babies.

Thanks for posting. It is nice to feel apart of your lives although we are not there.