Our first night with Toddler Beds

Well, I was half-way through editing all the pictures for this post when someone unplugged my computer and just... grr. I don't want to do it again right now, okay? I got stuff to do today.
Foremost on my list is the 45 minute drive to Provo to drop off cribs to my uncle and then play with his babies. Because, you read that right:
My kids are no longer in cribs. 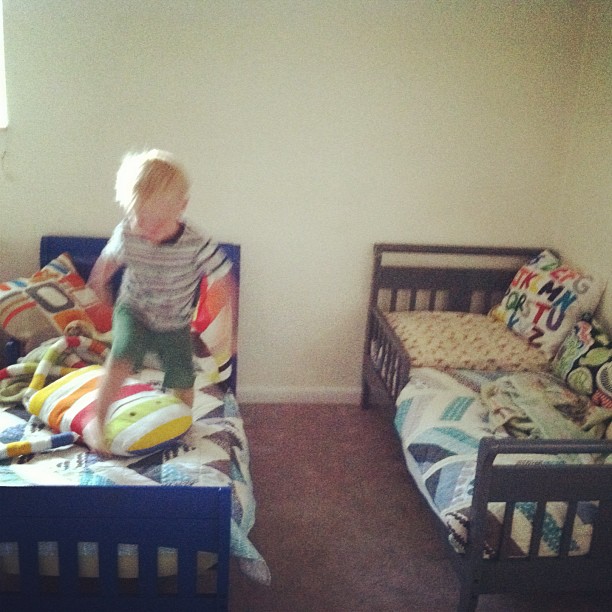 Yesterday morning, as Travis and I lay in bed contemplating getting the boys out of their cribs, there came a little creak at the door. And into our room tiptoed two crazy-haired boys with gigantic, proud smiles on their little faces.
They had figured it out.
And at naptime they kept on having it figured out. They climbed out of their beds three times before I gave them a stern talking to (which may have included the word spanking) and then they stayed in their beds.
During that naptime, I figured I might as well spray paint the toddler bed that's been sitting in our shed, since it seemed like we were nearing the end of cribs.

At 5pm, I decided on a whim, to just take apart the cribs and put the boys in beds.
No plan. Just a screwdriver.

So I did that.
By 6pm, the boys' room was emptied of cribs and vacuumed and my kids were eating dinner on the couch watching "Woody Movie." (Which, FYI, is ToyStory 3)
About 1 minute after I triumphantly carried my two barely dried, freshly-painted toddler beds upstairs, I regretted disassembling the cribs. About 15 minutes later, when I could still not figure out how to build those freaking beds, my downstairs neighbors came to the rescue.
And somehow three adults were able to build two beds in only like... an hour and a half.
(They were ridiculously difficult to build.)

Micah was in full-blown tantrum mode, and didn't want jammies or a cup of milk, or anything to do with sleep and Grey was stupid with excitement.
He kept piling all the pillows on to his new bed, and climbing up, pretending to sleep, and then laughing hysterically and flailing around so all the pillows fell off.

Finally Micah was interested enough in his bed that he agreed to sit in it while we read bedtime stories.

We read stories and said a prayer, and I gave the boys kisses and milk and left, just like always.
I could hear them laughing, talking, and inevitably getting out of their beds, but I didn't mind too much.
They usually talk for 30 minutes to an hour before going to sleep anyway.
After about 15 minutes Micah started crying as though he were hurt, and assuming he had jumped off his new bed and crashed into something, I went in their room. They had piled all their bedding in between the two beds and were snuggling together. Micah was crying because Grey was lying on his leg.

"You need to get back in your beds right now," I said. "It's ni-night time."
"Mama, this mine bed," said Micah, motioning to the pile of pillows and blankets. (I mean, how cute is that?)

We moved all their bedding back, and I retucked the boys in. New kisses. New milk in their cups. A reminder to stay in their beds.

The second time they were pretty quiet, and after a half hour I was quite certain they'd fallen asleep. I even went outside to try to clean the cribs before bringing them back to my uncle.
Then from my open window I heard a little whimper. "Mama? Mama?"
The boys had left their room, trailing their snuggle blankies, and were looking for me.

We went back into their room.
"It is not okay to leave your rooms. You need to get in your beds," I told them. We piled up all their bedding together.
"If you get out of your beds again, I'm going to give you a spanking."
They've each only been spanked once. But man. They don't want to make it twice.
15 minutes later they were both asleep, sprawled out in their new beds. 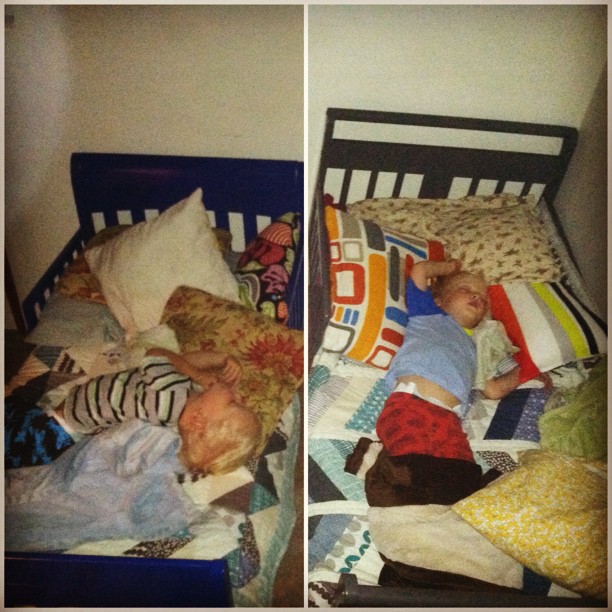 In the middle of the night, Grey fell out of his bed, and cried a little. Travis helped him back to bed. But when I snuck in to peek at them at 7am, Grey was on the floor again.
They woke up at about 7:20am, and I could hear them playing and talking for ten minutes before there was a loud knock on their door.
"Mama? Daddy?"

They weren't supposed to come out, and they knew it.
But this morning, they were giddy with excitement from sleeping in their "big beds."
I guess we'll deal with naps today, and I'll let you know how things go over the next few weeks, but all in all, it was a very encouraging night to begin sleeping in beds.
My little boys.
They're practically all grown up. 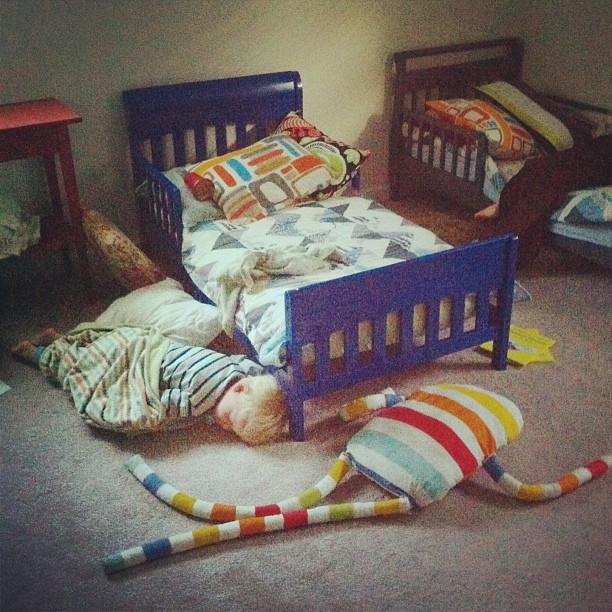 *A note about spanking: I always feel it necessary to say: I don't beat my kids. I don't pull down their pants and throw them over my knee. I don't smack them with a wooden spoon. It's just a smart smack on their diaper-padded butts. And only if they've had many, many warnings or it's something like this.
I give them warnings, so they always know when they're doing something that might get them a spanking. They are smart enough to choose whether it's worth a spanking or not.
That's all.

**Another note, about their beds: We got the beds for about $30 each off Craigslist and KSL, and gave them each a coat of spray paint. They're mismatched and not really well-painted. But I like them.

Yay for new beds! I'm in process of clearing my youngest's room to convert his crib to the toddler bed - so not ready for it. My big girl rarely sleeps in her bed as she gets too busy playing and then crashes in the floor. She also has a baby gate across her doorway because she will run (silently, mind you) through the whole house and get into way too many things that aren't kid-proofed. Kudos to you for getting the boys to stay in their room. Good luck with nap time.

The invention of the cheap baby gate in the door way works WONDERS! You can always use that as a new threat if they don't stay in their rooms early in the morning. It was worked for us very well with our toddler who is just a little younger than your boys. But we did ditched the crib at 16 months so she wouldn't be attached to it when the baby came.

Did you ever experience something like you want to travel but cannot do that due to the worry about where and how your baby will sleep while traveling? This is the common problem for the parents who have infants or rising toddlers. Just for this reason, most of the parents completely change their lifestyle and stop traveling outside when they’re blessed with children. But, this is not an expected incident for anybody. Instead, they deserve to enjoy every moment of their time with the newborn babies or toddlers. Taking help from a portable bed like Regalo My Cot Portable Toddler Bed can be a brilliant solution in this regard.

We stumbled over here by a different web page and thought I should check things out. I like what I see so now i’m following you. Look forward to looking over your web page yet again. https://www.one-commonwealth.com/how-can-you-be-more-space-efficient-with-storage-beds/

It was great that I felt it would fit my little daughter perfectly,
bassinet cheap