Grey and Micah have never insisted on having their beds full of their favorite toys or stuffed animals.
In fact, I've been known to try to force stuffed animals into their beds.
("Oh, look at how cuddly this puppy is! He just wants to snuggle up and give you kisses. Do you want him to sleep with you and keep you warm?")
And then I hear the soft thud of a little cotton puppy hit the bedroom door as I leave... they're not interested.

Sometimes they insist on bring a little car to bed with them, but only if they're playing with it right before they have to climb into their cribs.
Because, oh yeah, did I mention? They're still in their cribs!
They love their cribs. They want to sleep in their cribs forever. They know how to climb in and out, but it's pretty hard, and they usually fall and hit their heads - so they just don't.
Not ever.

Sometimes they bring books to bed with them, but I had to reinstate the "Only board books in bed" rule this week, since Micah has started draining his sippy cup of milk, then popping off the lid, and filling his now damp and stinky cup with pages torn out from his books. Then he puts the lid back on, and when I come in to get him after his nap, he pretends to drink from his book-cup.
He thinks it's hilarious.
I also think it's hilarious.
But mostly, it annoys me - Books aren't free, you clever little trickster.
The boys each have a favorite book to take to bed. They're not their favorite books to have us read to them, so I assume that what they really love are the pictures.
Grey's favorite book is called Far Far Away. It's about a pig who wants to run away from home, but decides to stay when his mom makes cake.  Grey seriously loves it, but that is because he loves to make cake. (He's also gotten really into looking at pictures of food in cookbooks.)
On the page where the mama pig is mixing ingredients, Grey lists off everything pictured.
"Budda, exs, plower, nolk, doe-co-lay, sucer, COOK CAKE!"
(Oh, you can't translate my boy's gibberish? Butter, eggs, flour, milk, chocolate, sugar. Come on, people.)
Micah's favorite book is called Cheer Up, Mouse. It's about a sad little mouse whose friends are trying to make him feel better. (You can click the link to the right to watch the trailer for it. My kids make me watch it every day. Our friend Jed wrote the book, but that's not why Micah loves it.) Micah likes to name all the animals in the book, and at the end when Mouse is cheered up by a hug (spoiler!), he likes to hug the book to his chest as hard as he can and say "HUG MICAH!"
So. Pretty adorable.

But lest you think that their beds just have a book, a boy, and a car in them... 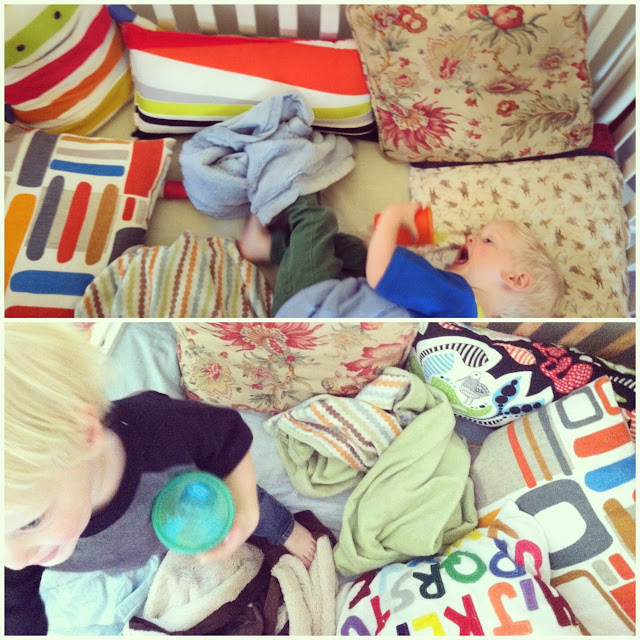 They are obsessed with "pow-lows" and "kikis."
(Pillows and blankies, guys. Keep up.)

They each have 5 (FIVE) pillows in their beds, and 3 blankets, although they often insist on more.
In fact, almost daily, they sneakily collect pillows from MY bed, and put them into their cribs. Then at bedtime, "Oh, what's that?! Geez, Mom. How did those get in here? DON'T TAKE THEM, I'LL KILL YOU!"
And sometimes they gather extra quilts and push them in through the bars into their beds.
What do they do with all their excessive bedding?

Well, duh. Like the little animals they are: they build a little nest/burrow to sleep in. They pile up all the pillows and blankets around themselves and then snuggle down into it in a little ball. They sleep with blankets bunched up under them, and pull pillows up over themselves. (They seem confused about the purpose of each item in their bed.)

And if that wasn't enough, they then have me drape the thick dark quilts I made over their cribs, so they are essentially in a little cave. They will not sleep in their beds, unless their beds are "pourts."
(Forts.)

They just lie, cuddled up in their caves, under piles of bedding, looking at pictures of baby animals and drinking cups of milk.
(P.S. Their new favorite weird insistance is that all milk be served in an orange or yellow cup. If I dare to give them milk in, say, a red cup - it is thrown bodily at me while they scream "NOLK! LELLOW!")
Okay, crazy people. You can have your milk in a yellow cup. You can sleep in a little nest. In a little cave. In the warmest, snuggliest room in the house.
Oh, did I make you feel sleepy and cuddly? Sorry, folks.

So darling! The only one I couldn't get was doe-co-lay:chocolate. That's a little tricky

CAVES! NESTS! I love it.

Golly jee, I needed this fun, happy post about the crazy irrational beings toddlers are. I love that you go with it and give them forts and blankets and books and whatever makes their little hearts sing.