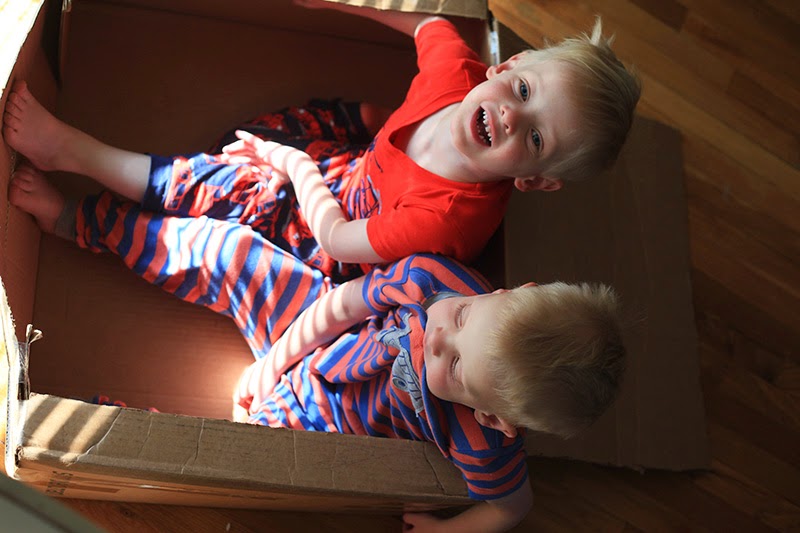 Two weeks worth of quotes. Predictably, the second week (the week during which the baby was born) includes a lot of conversation about Baby August.

The boys are really into the ABCs, but they can't actually name any of them or sing the song correctly. They constantly ask me to identify letters for them, to sing the alphabet song to them, or to read books about letters, though. So hopefully they're learning something? They can each recognize and draw a capital M and G - but they don't call them M and G, they call them "The letter for Micah" and "the letter for Grey."
Ah well. They're only three, right?
A few days ago, Micah got into a pretty heated argument with his friend Elanor. He pointed out some words and said, "These are ABCs," to which she responded "No, those are letters."
They actually started shouting "Those ARE ABCs!" "NO, they're not! They're LETTERS!" before the argument ended in blows and they needed to be separated by an adult. Sheesh.

The boys also seem to be struggling with explaining a lot of stuff from their imaginations or finding ways to speak quickly enough to clarify their thoughts.
Sometimes they'll start telling me a story in what must be the middle of their train of thought. The other day Grey was describing something, and he was talking so quickly that he was skipping words and was very hard to understand. There was a lot in there about a cave with bears and spiders, but if I'd try to interrupt and clarify "Wait, the spiders are fighting the bears or they were helping the bears attack us?"
Grey would let out this huge, exasperated sigh and growl, and say something like, "No, Mom! Listen! The cave is so dark and they hate the sunshine."
Wait. Obviously I'm missing a lot here.

They've also started saying, "I can't how!" Which is a combination of "I don't know how," and "I can't do it."
So if I say, "Take off your shirt and we'll get your pjs on," they say "I can't how!"
Usually it's something they CAN do, but they've been extra whiney and needy since the baby came.
They'll stand in the bathroom and wet themselves instead of sitting on the toilet by themselves- even though they're totally capable of doing it.
The other day Travis told Micah that he didn't need help going potty.
Micah stood in front of the toilet crying that he needed help pulling his pants down. Finally Travis pulled his pants down.
"Now sit down," he said.
"I can't how!"
"You can. Sit down and pee."
"I need help sitting down! I can't do it."
"Sit down."
"Help me!"
Seriously. So pathetic.

They love Baby August, and don't actually seem to mind that my attention is divided. Maybe it's because it's been divided between them since they were born- so they're used to it. Or maybe it's because I'm an especially pathetic pregnant woman, and have been using the baby as an excuse for months, so they're not surprised that I still can't carry them, and I'm still too tired to take them on walks.
The other day they were jumping off the bed into Travis' arms. Their friend Elanor yelled, "Becky catch me!"
I said, "No, I can't. You'll have to jump to Travis."
Grey turned to Elanor and said, "Mom can't catch you because she has no baby in her belly."
My old excuse was the baby inside me, but my new excuse (that the baby is on the outside now) has been readily accepted.

Grey: What's on your lip?
Me: I don't know. What?
Grey: Oh. Just some hair. You can shave it off like Daddy does.

Grey: Let's lock the door so bad guys can't come in!
Micah: No! I want to play with bad guys.

Micah: Why you going home, Grandma? You live here now!

**Pointing out his car window to a car with loud music playing.**
Grey: I wanna go in that car.
Travis: Why? You like the music they're playing?
Grey: Yeah!
Micah: No problem, Grey. You can go in that car.

Travis: ARG! We are trapped in the city!
Grey: Why Dad?
Travis: Because of all these dumb runners!
Grey: Running isn't dumb, Dad. I like to run to tackle those people!

Micah: I don't want to want to play that running game.
Grey: I love to play running games!

Micah: I don't want ice cream! No no no!
Me: Good. Because I didn't offer that to you.
Grey: I don't want fries, Mom! I don't!
Me: What? You don't get fries! We are going home to get sandwiches. No one said anything about fries or ice cream.
Grey & Micah: WHAT?! No! Mom!
(My children were apparently trying to use reverse psychology.)

Grey: I want to jump on the trampoline!
Me: I actually think it's broken.
Grey: WHAT?! That is the WORST!

Grey: Queen Elsa needs to hide alone in a castle so nobody can hurt her.
Me: That's pretty lonely, huh?
Grey: Her can shoot ice, and shoot castles because she is stronger.
Me: That's a cool power.
Grey: It is! She can make ice and castles in her hands!

Me: Why are you being antisocial?
Grey: I'm just having privacy. Go away.

Grey: I wanna play that game!
Travis: What game? We're just snuggling!
Grey: I want a turn to play snuggling! I love to snuggle!

Me: Come see Baby August!
Grey: Does he have a penis?
Me: Yes, because he's a boy.
Grey: Just like me!

Grey: Is there a new baby in your belly now?
Me: Nope.
Grey: It's just empty?

Micah: Baby August is crying!
Me: I think that he's hungry.
Micah: For milk!
Grey: From your breasts!
Me: You're right.
Grey: Well, give it to him QUICKLY!

Grey: Can I turn this on?
Me: No, thank you. It will be too loud for August.
Micah: I will turn it on.
Grey: No, Micah! It will make Baby August cry.
Micah: But I want to turn it on!
Grey: Hmm, well, those the rules. Sorry!

Micah: He has little toesies! But I have big toes like you!

**I am singing a children's hymn from church.**
Micah: Mom. That's not Let it Go.
Me: I know, honey. Sometimes I sing other songs besides Let it Go.
Micah: Why?! Stop! Sing Let it Go now, please.

Grey: August can only eat milk for breakfast to make him grow. I have strong teeth to chew up pancakes for my breakfast!

Micah: Where's my special sword?
Me: Here it is.
Micah: Oh good! Now if bad guys come, I can protect you!
Me: Thanks.
Micah: But there are no bad guys here now, but if they come with their dragon- I can fight them and the dragon fire!
Me: Won't the fire burn up your sword?
Micah: Yes it will, except I can get some water from the kitchen and fight the dragon with it!

Micah (poking me in the belly): I want August to drink from this.
Me: This is my belly. There's no milk in there.
Micah: Hmm. What IS in there?

Me: I think August is ready for his breakfast.
Micah: He wants a hotdog sandwich, like me. That's what I'm having for breakfast and I can watch Scooby Dooby while I eat it!
Me: No. You can't have a hotdog or watch a show.
Micah: What?! August and me can do it TOGETHER!

Grey: There's a baby in my belly. Soon he will be borned.
Me: Oh, cool! What's his name?
Grey: Hmm. Harvey Harvey Jeremy.
Me: Wow. That's a good name. Do you even know anyone named Harvey or Jeremy?
Grey: Yes. Mine baby.

Grey: Ooooh, look! Hurray! New soap! I wanna use it to wash my hands!

Posted by Becky Pitcher at 7:52 AM