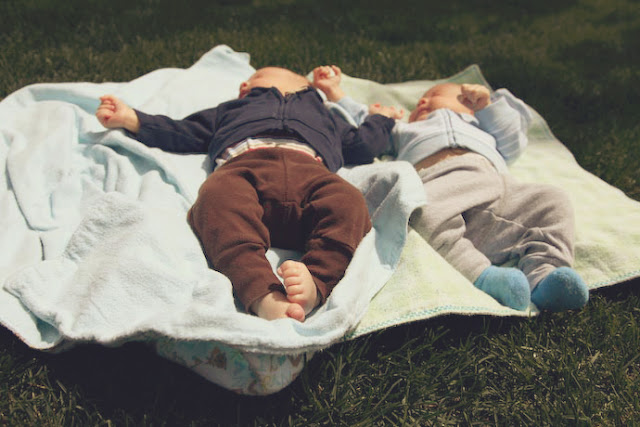 Utah has the dumbest weather ever.
This last weekend it went from being 75 degrees to three inches of snow within 48 hours.
Being that most days are somewhere in between, and when nice weather will come again is anyone's bet - we have to take advantage of spring when it's here.

Travis' family has a nice pretty yard and we laid out in the grass during naptime on Thursday (one of many naptimes).
The boys loooooved being outside, but it was too bright to open their eyes.
They'd occasionally squint at me when a cloud passed over the sun, but mostly they just laid out and contentedly soaked up their vitamin D. 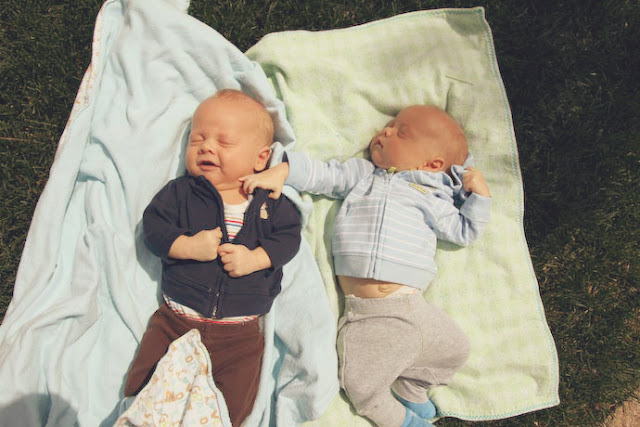 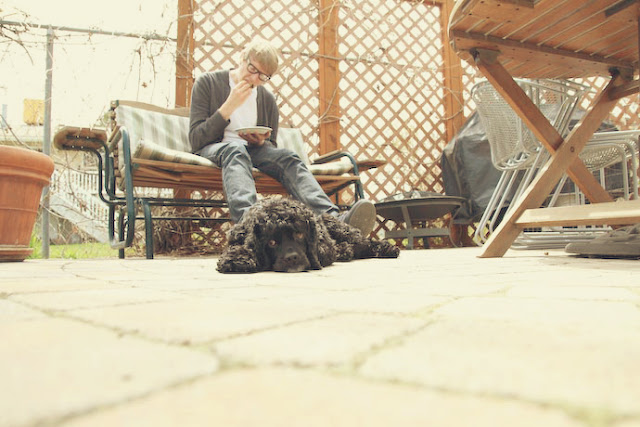 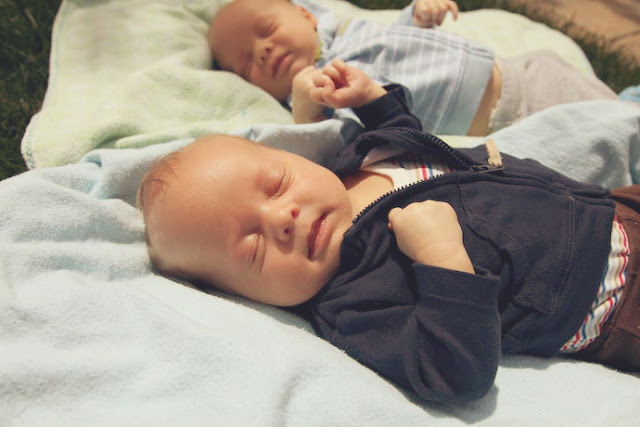 Oops, I just realized I forgot to label these babies for you. Grey on the left, Micah the right.  Micah gets fatter every day and I keep mistaking him for his brother (unless they're next to each other.)
I like to call Micah "Grey last week," because he looks like Grey did last week.
They're getting so fat. 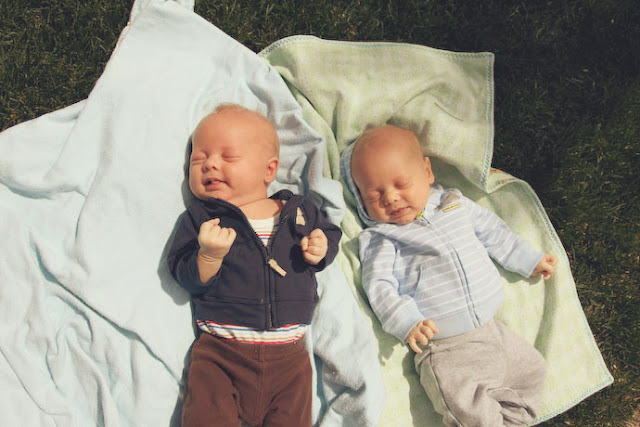 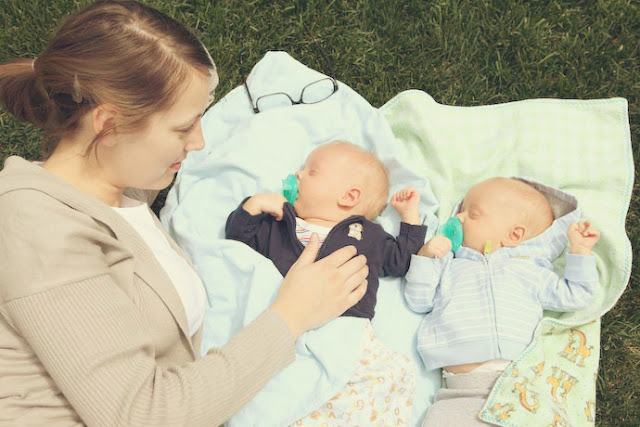 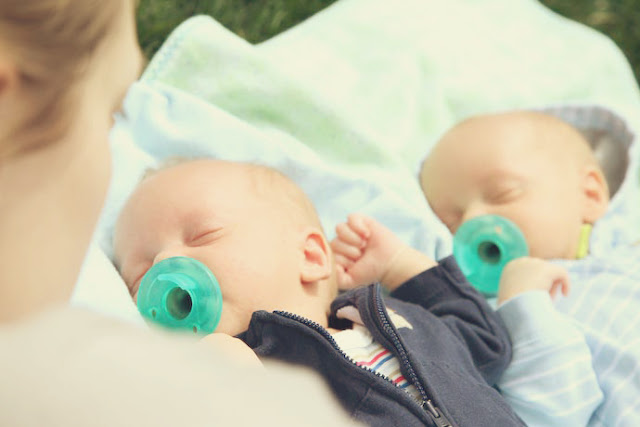 Those giant green pacifiers are the worst! I planned on not using pacifiers, not because of nipple confusion or controversy with ear infections, nursing, or SIDS.
Just because they're ugly in pictures. The boys love them though.
Two to one. I've been overruled. 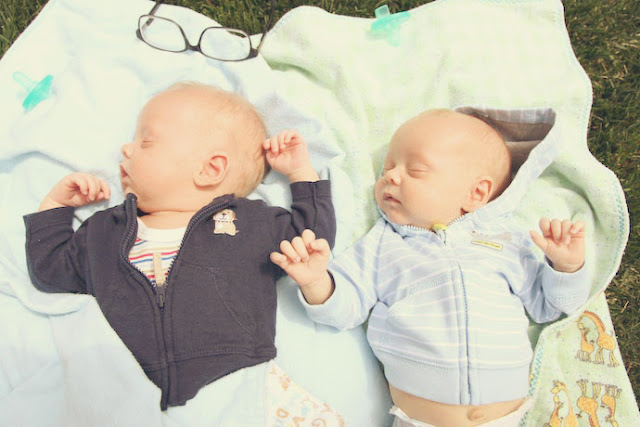 Look at Micah's belly! I love a good baby belly.
He was supposed to have a onesie on, but I only brought one extra for each boy (how foolish) and when I went to put on Micah's back-up onesie he had outgrown it!
I was so proud. It's the first article of clothing they're too big for.
They're still in Newborn sizes! 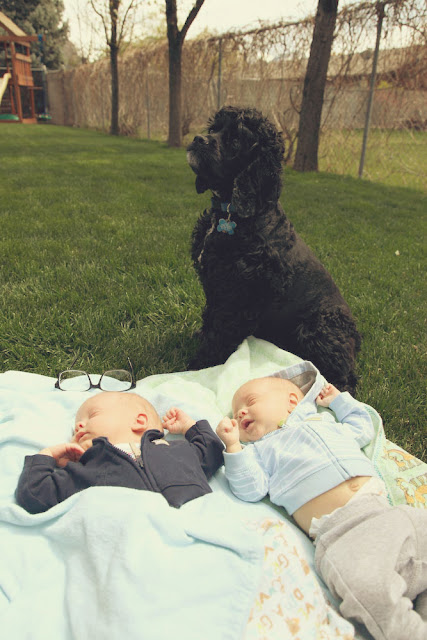 Travis' parents' dog Riley loves the babies.
Or, rather, is obsessed with the babies. When I nurse he sits outside the door (I won't let him come in the room) and he's usually the first on the scene if a baby so much as coughs.


It's pretty cute.
In fact, I never much liked Riley (because I don't really like dogs, except for puppies and labradors) but the way Riley follows the babies around has won me over.
Now I love him. 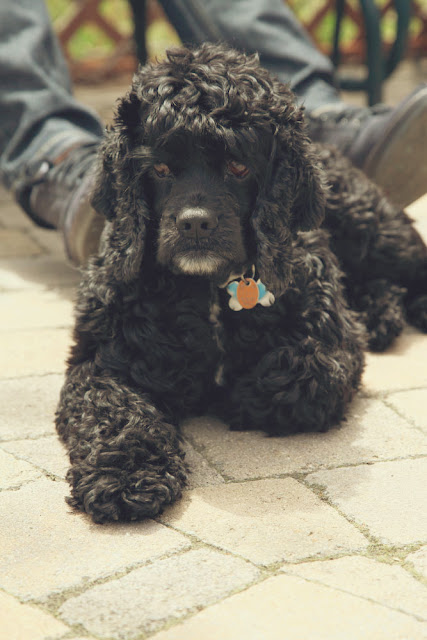 I hope the rest of the week is as lovely as this one fine day.


And I hope you give me a vote before you go.

Posted by Becky Pitcher at 7:12 AM

ahh it looks so relaxing on that blanket in the sun. I cold take a nap right now...even though I just woke up.

I think the green pacifiers are better than the butterfly ones. I really don't like those.

looking at your little boys makes me super excited to see mine so soon! Because yours are super adorable :)

They look like they loved being outside! Isn't it funny how dogs can be so protective of babies?

The midwest is no better with weather. We also got snow after a week of 70 degrees.

Oh Becky, I love them.

Such beautiful, beautiful boys. :) And a sweet dog to boot! Glad everything's going so lovely.

I think you may have that two to one problem quite often thru the years. These pics are so wonderful! I can't wait to snuggle them. I get very little of that you know.

I love my nephews, they are simply handsome!

I love that first picture of them