Taking these pictures today was nothing short of... embarrassing. I seriously chased them around my front yard for fifteen minutes begging yelling "Please, just sit - hold on! One minute! Just sit here, one second while - CANDY! Do you want some more candy? Just come - One picture! Just sit - one second - here's candy! Just sit here for one picture!"
And they ran around, ate candy, cried, and tried to peel potatoes (oh, didn't I mention that they were both holding potatoes and stabbing them with peelers? It's their new obsession.)
So. We take what we can get. Even if what we can get is only three mediocre pictures. 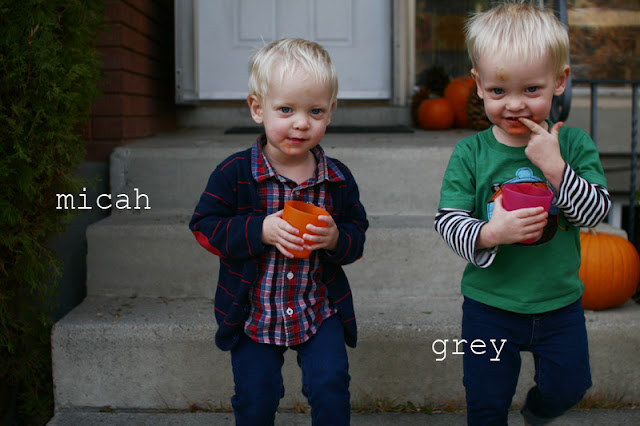 The boys at this age are... amazing. Every single time Travis comes home from work (granted, this month there have been days at a time when we don't see him) He's like, "HOLYCOW the boys can say and do a million more things than the last time I was here!"
A month ago, they were really good at communicating what they wanted. ("What do you want for breakfast?" "A banana.") Now, it's almost like they can have conversations with us!
They even make jokes!
We have an awesome little board book about a garden that says "The orange carrot grows in the ground, I pick it and eat it. The red apple grows on the tree, I pick it and eat it." Etc.
The other day Micah wanted to be held, and as I picked him up, I said, "Micah is on the ground. I pick him and eat him!"
Micah started giggling like crazy, and then pretended to nibble on his own fingers. It was so cute! He totally understood my joke, and then made one of his own!  Micah has also started saying, "Help, please" and "No," a lot, and it's really cute. Before, he used to say "No" almost only when he was doing something that he shouldn't. Now if I say, "Can I change your diaper?" He yells, "NO!" and runs into another room. Yesterday I said, "Micah, can you make a good choice?"
He thought about it for a second, then shook his head and said, "No."
He says Help, please "Hup-ease" and it's adorable. He says it when he's stuck, when he wants me to put his shoes on, when he needs a drink. He understands when it is right to ask for help, and has even offered to "Hup, hup Mama?" when he thinks that I need help. 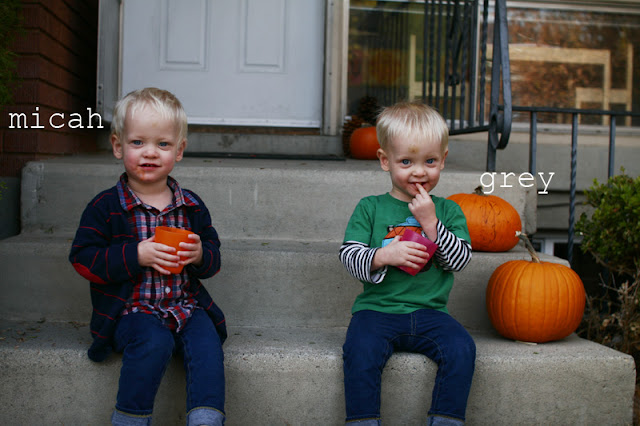 Both boys have been spending a lot of time in time-out the last two weeks, Grey, because he is really into coloring on the furniture and walls, and Micah because he's started biting.
Grey loves to color. He will color for half an hour without stop or distraction, and would color longer if I let him color on the walls. Usually I have to stop him, because his coloring is getting out of control.
Micah also loves coloring, but his favorite toys are the Fischer Price Christmas Nativity, which he loves to play with and say all the animal sounds, and repeat "Babyyy, babyyy," and my books.
The boys have always loved their blankets, but recently they traded blankets (they decided that they wanted each other's and have stuck to it!) and they insist on carrying them everywhere. They eat with them at the table. They bring them in the car. They dragged them behind them trick or treating. It's gross! I have to wash them almost daily, and they scream at the washing machine when I put them in the laundry. They don't care about having stuffed animals or dolls, but they love their blankets.

They have also started picking their noses, especially Grey. Grey will pick his nose for fifteen minutes, and then bring me all the boogers he managed to excavate. If I don't take them immediately, he either eats them or wipes them on my clothes. If he can't get a tough booger out, he'll request that I pick his nose. He also loves picking Travis' nose, but has yet to try and get in mine.  Micah doesn't pick his nose as much, but he does like to wipe his nose. He wipes his nose, and then throws the tissue or wipe away in the garbage. He loves to wipe other people's faces, noses, hands, (in general, any part of their body) and has tried to help me wipe Grey's butt several times. Yikes. 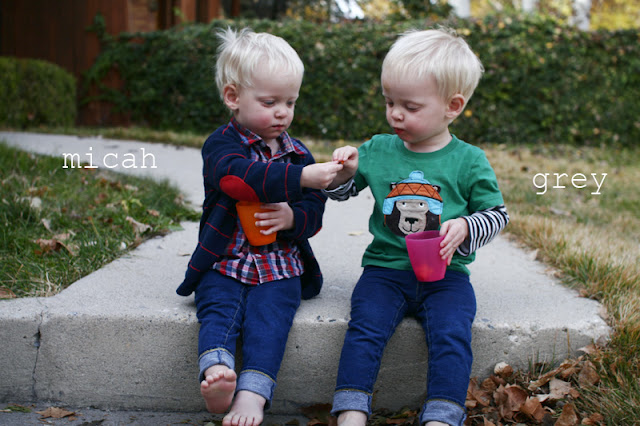 And the boys are finally getting weaned off bottles... but not really. Grey is totally weaned. He doesn't even request or want a bottle anymore, even though Micah still gets his. Micah, on the other hand, refuses to even touch a sippy cup. I put him in bed with a bottle that has about a tablespoon of milk in it, and a full sippy cup of milk. Night after night, I sneak in after the boys are alseep, and Micah hasn't drunk a drop from his sippy! I just want him to get more used to having a sippy cup than a bottle, but he won't use anything except a bottle at bedtime.
I know that I shouldn't let them have anything to drink in bed and whatever, but bleh. You try having these boys. THEY LOVE MILK. They stand at the fridge and scream, and if I'm not fast enough, they open the fridge up and get the milk out themselves. They have yet to dump a gallon of milk on the floor, but they know how to get the cap off the milk, and I know it's just a matter of time.

And as far as teeth go, Micah has seven, and Grey still only has six! Little weirdos.

Have you tried these cups yet? http://www.walmart.com/ip/NUK-Disney-5oz-Silicone-Spout-Learner-Cup/20863030

My daughter had the same problem as Micah and wasn't bottle weaned until right before her second birthday. We tried every sippy cup out there and finally found these. They are very similar to a bottle but have a silicone sippy cup spout to slowly transition them to a regular sippy cup.
It's definitely worth a shot!

Oh my gosh, you are so funny! And your boys are so awesome.

I started following your blog when you were pregnant and I was as well. Your boys are about a month and a half older than my son. I love all your posts of them because it's like reading about my own kid. The biting and nose picking has started here too. I get a finger shoved in my face as he says "ewwwie" and wants a tissue. Thank you for sharing all the ups and downs, it's nice to know I'm not the only one experiencing this crazy and fun side of little boys :)