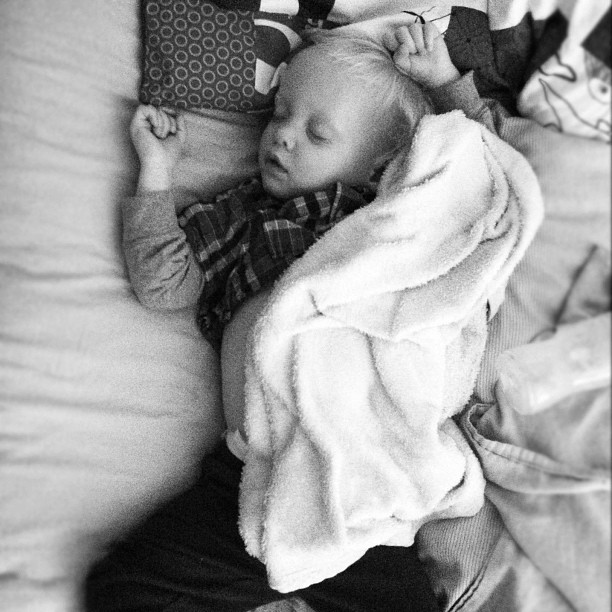 Micah has been fighting his bed lately. He screams at naptime, he screams at bedtime, he screams when he wakes up in the middle of the night.
To say that this is unusual is a HUGE understatement. Normally, Micah loves his bed. He loves his nap. If we're outside playing and doing something really fun and I say, "It's time to go in and go nigh-nigh," both boys sprint to the house. They run to the fridge and wait for their milk, and then they walk to their beds by themselves.
Usually, they beg to go to sleep, "Ni-ni-ni-ni-ni-ni!" they'll plead. If I don't put them in their beds right away, they curl up on the floor next to their cribs and whimper. Sometimes, if they're feeling especially tired and pathetic, they'll crawl under their bed with their milk and blanket and cry, "Nigh-nigh! Nigh-nigh!"

But Micah hasn't just started kicking and screaming and pulling my hair and yelling, "NO! Don't! Please, NO!" (which is kind of cute, that he knows how to speak...) but after he's in his bed, he doesn't just settle down and go to sleep. He stand up in his crib and SCREAMS bloody murder for hours. And I know this, because I keep saying to myself, "I'll just let him scream. Whatever. He can stand in there and scream all day."
Well, after an hour, I feel so bad for Grey (and also, a bit for Micah, I guess) that I go in and get Micah. He screams if I try to lay him down, he screams if I try to give him his bottle, he usually screams no matter what, unless I take him out of his room and try to get him to snuggle on the couch.
Usually he has to fall asleep in my arms, in my bed.
This literally hasn't happened since he was 4 months old. And I know he isn't sick or teething, since he does very specific things when he's sick or teething. He just... doesn't want to sleep.
And usually, he might wake up once half way through naptime, and then settle down for the rest of his nap after a mumbled, "Hi, Mama?" if I don't respond. He wakes up in the middle of the night and looks at a book, or whimpers a little and then goes back to sleep by himself.

But not anymore. Now, he takes 1 nap that is only an hour long, because when he wakes up part-way through his nap, he doesn't go back to sleep, he wakes up ready to play. Then he wakes up screaming in the middle of the night.
I actually think it might be nightmares.

Grey had nightmares every night for a week last month, and then stopped having them. I would always know they were nightmares, because he wouldn't wake up slowly and then start to cry. He would wake up suddenly, already screaming and crying. And when I went in to soothe him back to sleep, he would want to snuggle and hug for a long time before he went willingly back to bed.

I think that's what's going on with Micah boy. I don't think that he is having nightmares at naptime, just at night, and I think that he's freaking out because he's afraid to sleep, which is why he'll sleep and go back to sleep if we're with him.

They have a night-light and snuggle-blankets that they love, and they always have books in their beds to read and calm themselves. I actually think that it helps that they share a room, too. If one boy wakes up and their brother isn't in there... holycow, it's freak-out central.


Anyway, any other thoughts or suggestions about what this might be or how to help him?

Posted by Becky Pitcher at 7:42 AM

18-month sleep regression. Gabe's been going through it for two months!! He's finally pulling out of it and getting back into a good sleep routine... slowly. We still don't have naps back yet, but at least the screaming before bedtime and midnight screamings have stopped. Read this article: http://alphamom.com/parenting/toddler-parenting/when-your-toddler-stops-sleeping/

It doesn't give a whole lot of advice, but it really made me feel better.

Also, I wish that we were having these conversations in person. I miss you. Dumb Salt Lake.