**A pre-post note: I wrote this on Thursday after a really good day with my wee lads. Friday was a really BAD day with said children. So when I say things like "Grey never has tantrums," or "I can't remember the last time we had an accident with potty-training:" that's not super true anymore.  But  I don't take back anything I said.    Somehow, I got really lucky with these boys.
This is 100% a blog post bragging about what good kids I have. So be prepared to roll your eyes while I yammer on about their finer qualities.** 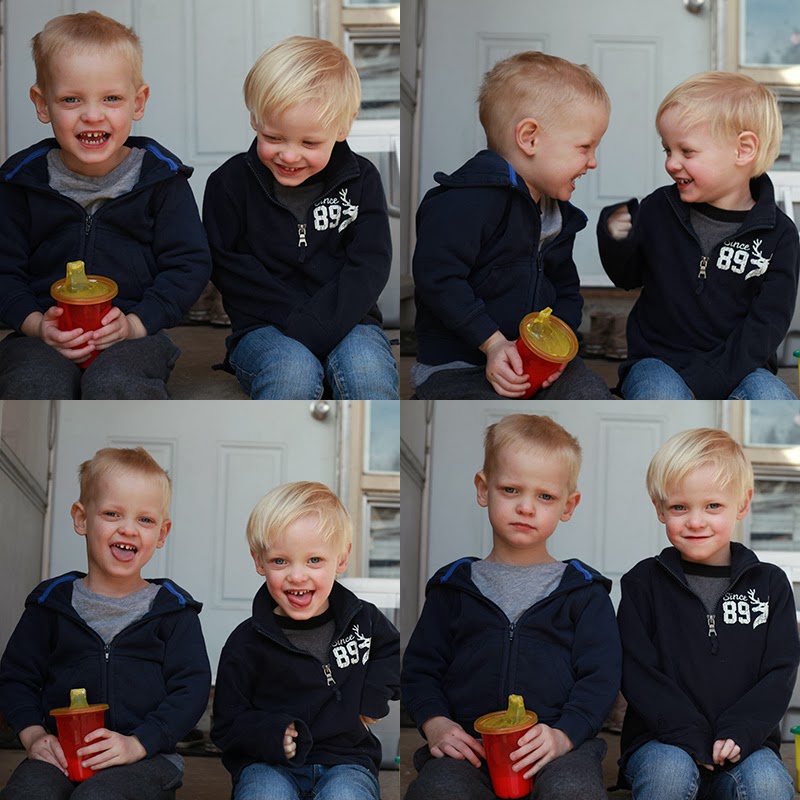 Recently a friend and I were talking about the personalities and "easiness" of our kids. She said that even though her daughter was really smart, talked well, ate and slept well, and generally did all those things Moms wish their kids would do- she's not an "easy" three year old. There is drama and bossiness, tantrums and what-have-you.
And it started me thinking about Grey and Micah.
The terrible twos seem to have come and gone at our house. I know lots of parents say that three is actually worse than two, but we've gone from the boys each having several tantrums a day- to having maybe a tantrum every couple days. Grey throws like one (weak, 10 minute long) tantrum a month - which is about how often I throw tantrums.
And usually the moodiness is being caused by hunger, feeling neglected,  or lack of sleep- not "attitude."
The boys still don't have the time or patience to sit still and eat, and they cry if I try to feed them something for lunch that isn't a quesadilla, hot dog, or peanut butter and honey sandwich- but they'll eat those three things like there's no tomorrow. And they're not picky about dinner. They're just as likely to eat or not eat anything- just depends on how hyper they are from seeing their dad come home from work.

They get up in the night to pee, and want to rise with (or before) the sun- but they generally put themselves to sleep- and yeah. They're completely potty-trained. I can't even remember the last time we had an accident.
They fight, hit, take toys from each other, and are quick to retaliate in kind if they're hurt by someone- but they're also tough. When they get hurt (even pretty badly) they almost always manage to wipe tears away and get back to playing within seconds- not minutes.
And even though they'll beat up on each other (and sometimes an unlucky friend), they're also really concerned about how everybody is feeling and doing. They want to protect their friends- especially if someone is doing something dangerous.
After Micah slipped on the ice and got a bloody nose (which he only cried about for 20 seconds), he constantly reminded Grey and I to be careful on the ice so we would be safe.
When Grey watched Micah cooking an egg on the stove top, he said "Don't get burned, 'cause I love you!"

The boys are whiney, and sometimes automatically resort to a terrible noise-making and cringe-worthy moan when they want something. But usually, all it takes is a reminder like, "Please don't speak to me in that voice," or "Can you think of a better way to ask me?" And they instantly change their tone to one of polite happiness, being sure to pepper their requests with as many pleases and thank yous as they can squeeze into a sentence- and they almost never have to be reminded to say excuse me, you're welcome, please, or thank you- even mid-whine!
And they're quick to compliment. Several times a day, each boy tells me, "Mama- you are very pretty." And on walks I've been told that I'm "a good walker" and "a nice pinecone finder." Among other things. I love to hear them tell each other, "Nice jump!" or "Good job!" They never accuse people of doing things the wrong way (unless it's naughty), but are really quick to praise.

They have so much energy and want to run, pull the cushions off the couch, wrestle, jump, climb, and be physically busy for hours at a time (which can be insanely exhausting- even when you're not pregnant!) Grey will beg "run with me!" for HOURS at a time- and will seriously run laps around the park the entire time we're there- which is basically a recurring nightmare I have (being forced to run).
But sometimes they're also really good at holding still and snuggling. They'll look at books with me for long periods of time- and recently have become fascinated with oral stories.
We'll all lie together on the couch or a bed, snuggled up, and I'll tell them fairy tales or Bible stories.
They love to interact with me, answering questions, predicting what will happen, acting out characters' reactions to things.  They will request the same story half a dozen times in a row- until they can tell it perfectly themselves.
Grey is especially gentle and snuggly at times like that, and will request that I lie with my eyes closed so he can trace lines on my face or give me butterfly kisses on my cheeks.
Just.
They're good.
They're so good.
Sometimes I get so frustrated with them. I'm tired and annoyed, I want to get away from them or force them to just sit down and eat already, I need everybody off my lap and nobody trying to "help" with dishes.
But then I try to remember.
They're good.
Yes, they get suds on the floor when they wash dishes- but they're trying to help me.
Yes, they took all the cushions off the couch for the tenth time today- but they're playing nicely together and will help me put them away when they're done.
Yes, they're crazy, energetic, busy, and everywhere- but they are three year olds, not pregnant ladies- and at least they can usually entertain themselves. All they request from me is that I occasionally shout "Yeah, I'm watching! That was a cool jump! You're so fast! Great climbing! Can you do it again?"
I can shout from here, I guess.
And what I want to shout is, "You're good boys! Thank you for being so happy, so eager to help and to please, so content, snuggly, loving and funny. Thank you for believing all manner of silly and impossible things- but especially thank you for believing that I'm the best mom and for telling me so. Thank you for being easy-going and friendly, for loving each other and those around you. Thank you for your desire to learn, ask questions, sing songs, tell stories, and make art. Please keep it up. I don't mind that you're energetic- it's probably my fault for giving you sugar. I don't mind that you get frustrated, I'm the queen of crying in frustration and anger. It's okay that you're messy, because we're learning how to clean up after ourselves. Thank you for being the boys that you are. My not-easy, but not-really-hard-at-all boys. I love you."

I don't know. Elanor is generally not that difficult. It was a hard week when we had that conversation. She is almost always good in public and generally is nice and gets along with almost every kid. She does throw tantrums and have opinions about things, but tantrums are more monthly than weekly--even if they are pretty bad sometimes. She is generally not whiney. She has her things, but I would not trade her for another kid.

Convinced yet? (just kidding, I know they are wonderful)