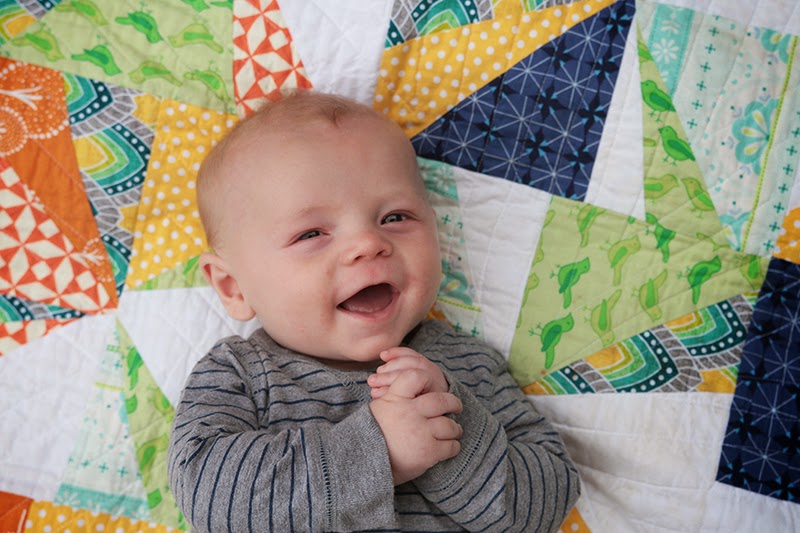 August! This little man is four months old. A fact which I failed completely to remember until a sales clerk said, "Oh! How old is your baby?" and I said, "Three months."
False. He has been four months old for a few days now. He is very much like he was as a three month-old, in that he is a cheerful, patient baby that rarely cries, but laughs and smiles almost constantly. He lets his brothers play, pull, and tumble all over him and rarely complains (in fact, he generally loves it.) He loves the boys so much. He watches them constantly and I know he can't wait to be running off with them. Once he figures out how to move, he's going to be unstoppable (and probably drive his brothers crazy, getting into whatever they're doing.) 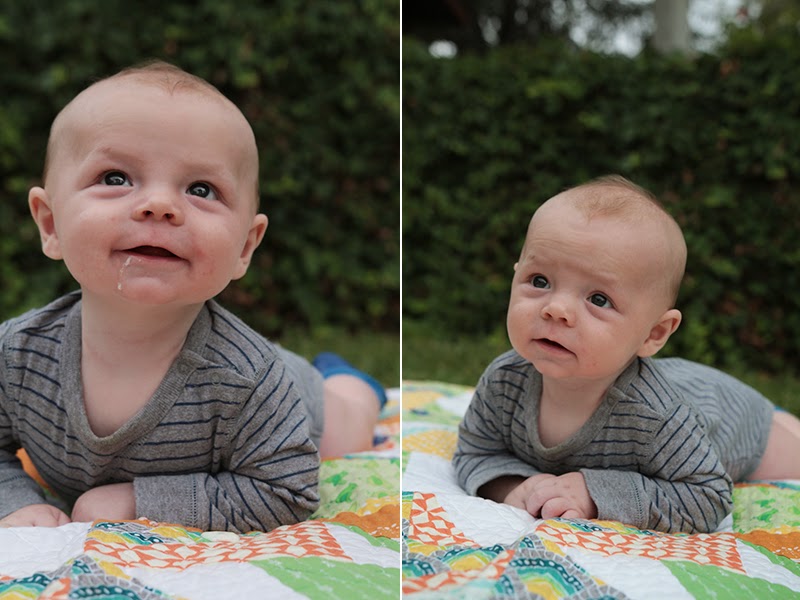 In the above pictures, I was trying to get August to look at me, but instead he was watching Grey dance and parade around the yard.

August sleeps really well in some aspects, and poorly in others. For example, he goes to sleep on his own with very little trouble. At naptimes, I usually just lie him down swaddled, and leave the room and he goes to sleep on his own. (Although sometimes he likes to be rocked to sleep, or have me lie with him on my bed for a while.) At night he wakes up, eats, and goes immediately back to sleep without any rocking or his pacifier. But at night he's been getting up to eat every two and a half or three hours. Sometimes I don't want to feed him after so little time, so I just reswaddle him and give him a paci. He will go back to sleep for about an hour, but it's often restless and he'll hum and wriggle in his sleep. So I end up sleeping restlessly, too. Also, he hums in his sleep all the time. It's so annoying, and very hard to sleep through. I'm hoping it's just a growth spurt and he needs extra food, and soon he'll start sleeping in 5-6 hour blocks again, because I am tired.

He really wants to eat solid foods, and starts hyperventilating, kicking his legs, and gasping with excitement when he sees us eating. I stuck a bit of mushed up banana in his mouth the other day and he was delighted. I'm not really ready for him to eat solids, yet, but I feel it close around the bend. 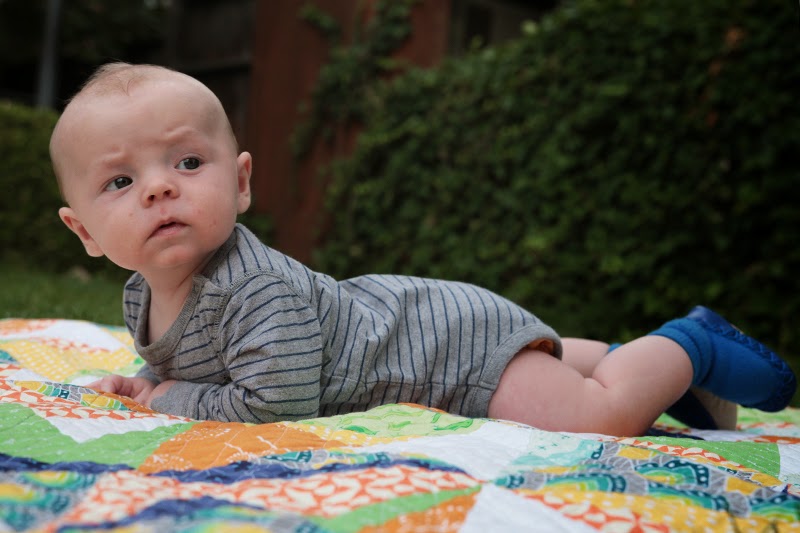 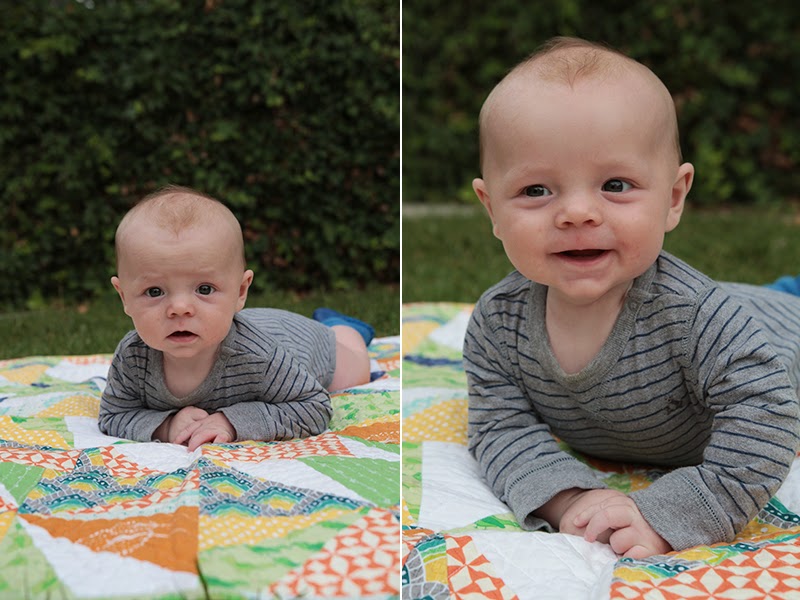 August has been chewing on his hands (and anyone else's he can get) like crazy, as well as drooling everywhere all the time. But I seem to recall that the boys were the same way and they didn't get teeth until about 10 months.
August is so big, weighing about 16 pounds and already wearing clothes that Grey and Micah fit in when they could walk. WALK. I never really thought Grey and Micah were behind developmentally (they weren't really, despite being preemies.) but looking at their four month old update it's crazy to me how different they were from August. They couldn't lie on their stomachs and hold their heads up so high or for so long. They were nowhere near sitting. They were teeny tiny. But they could roll, something August has no inclination to ever do. He only rolled over once in the last month, and I think it was a complete accident and quite surprised him. 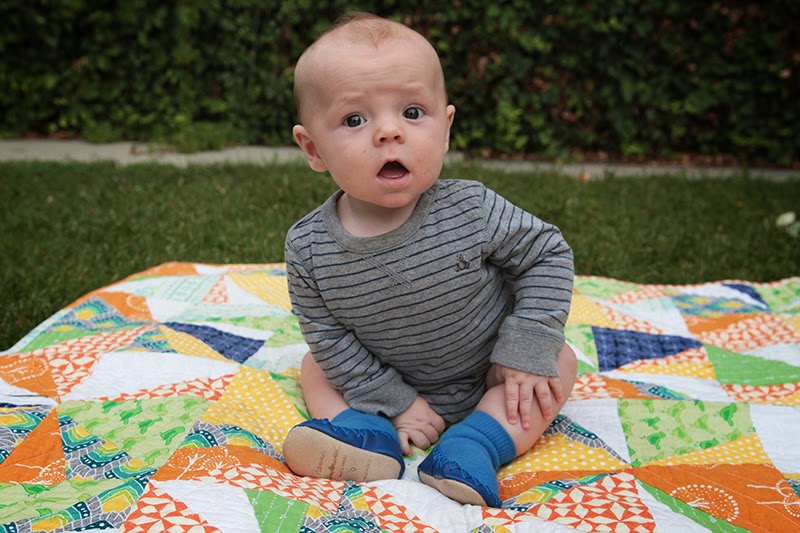 He wants to sit up so badly, and can actually sit up for about 15 seconds at a time on the solid ground (if propped correctly, as above). He can sit up on my lap indefinitely (without leaning back against me), but my legs help to balance him- so it doesn't quite count. It's tricky to get pictures of him sitting though, and most of them ended up looking like this, haha: 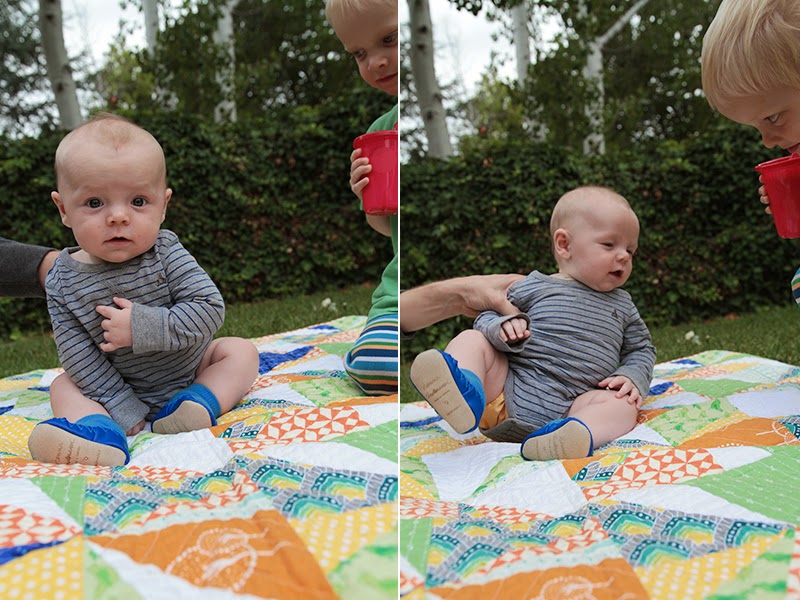 We all love this boy so much, and I can hardly remember what our family was like when he wasn't a part of it. Isn't it funny how that happens?

Posted by Becky Pitcher at 9:19 AM

I'm so excited to meet this fella! He sure seems like a baby I would want to cuddle and play with all day!

Your baby is so darling! I love his name, too. I'm drooling over your beautiful quilt! Did you make it? And if so, what pattern is it? :)