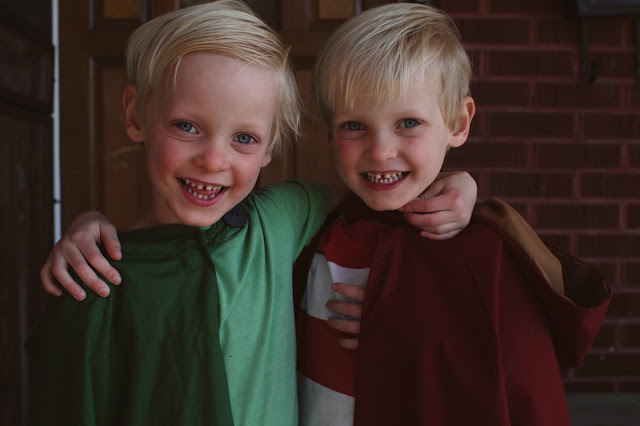 April Fools! For my hilarious prank today, I'm pretending like I'm a real blogger again.
Because, you guys, a whole month has gone by since I took these pictures- documenting that my children are now five years old.
Now that they're five, I've instructed them to start telling people that they're in Kindergarten. I'm so great at home schooling. Ha! (Another hilarious prank.)
How many pictures of Grey and Micah can I post, wherein they are looking straight at the camera and smiling with their pointy teeth, sparkly blue eyes and perfect, yellow-white hair, and their arms are around each other and they look too cute to be real? AS MANY AS I WANT, OKAY?
That's a mother's right! I know they all look exactly the same- (and in fact, even my children look the same) but these are the cutest pictures that I've ever seen and I love them.
My wittle babies are all growed up. (Crying emoji! Because I know longer know how to even write without tiny facial expressions.) 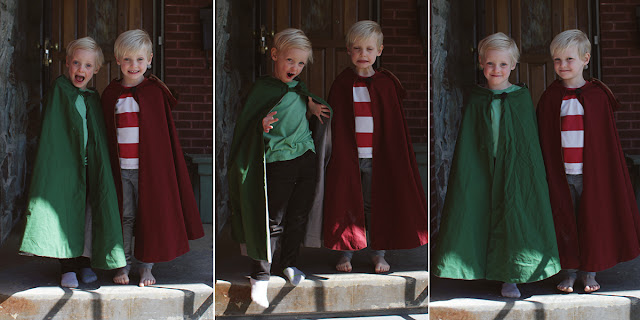 Grey and Micah are both so creative, imaginative, and wacky- more than any other kids I know. They play so well together and spend the majority of their time playing house, having adventures, digging in the garden, or snuggling together. But always together. They both spend so much time trying to make each other laugh, and trying to help or comfort each other. Lately they've been playing "Winter in the Big Woods," in which they build a fort to be their cabin, and then they hunt wild animals, plant a garden, milk their cows and "eat lots of meat, because thats the only food you can get in the winter."
We've read many chapter books out loud together- and their favorites this year have been The Boxcar Children, Peter Pan, Charlotte's Web, and The Lion the Witch and the Wardrobe. They liked Robin Hood, but the language was tricky- more than anything it opened their imagination to games like "Merry Men in the Green Wood." (They like to title their games.)
They love August, but want him to be abel to keep up in everything they do. They usually assign him a silent role in their games, like R2D2, a baby bear, an unhatched egg, etc.

Grey, at five is imaginative and funny- he is constantly telling us stories, doing impersonations and giving inanimate objects names. He's so thoughtful and spends a lot of his time zoned out or by himself, he'll get lost in his own world and I'll find him sitting in the garden talking to himself and laughing, and then a few minutes later he'll tell me "I wish I were a chicken, so they'd let me join their flock." He's always legitimately surprised and flattered when I say that I love him more than anything in the world. He loves to read and tries SO hard to understand decoding, and listens the best when we read aloud. He has an eye for beauty and constantly compliments the people around him. Every single day, he tells me some variation of "You look beautifuller than ever, today."

He's always the first to spot flowers or notice the sunset and he tells me that it touches his heart and makes him feel happy. He's determined to be GOOD and often asks about or explains pretty deep spiritual and scriptural truths, and tells me that he can feel the Holy Ghost helping him make good choices.
He has been having nightmares lately, but more often than not- they begin before he's even asleep. He tiptoes out of his room a few times a night and tells me "I had a scary thought," usually it's about monsters, natural disasters, and/or his family disappearing. He gets scared VERY easily, and even cries during shows like Curious George, because he's afraid George will get in trouble for causing mischief. He's very shy and sensitive- something that's been difficult for me to get used to. I'm afraid I often embarrass him by drawing attention or laughter towards him - something Micah and I would both like! But which leave Grey feeling humiliated and shy.
He's really into Robin Hood (or Will Scarlet especially- as you can tell by his cloak- the only thing he wanted for his birthday.), Princess Leia, and birds and owls. He and Micah play "Birds" all the time, and build lots of forts and nests. Grey keeps his stuffed owl Katie with him at all times, and will cry that she is so scared, hurt, messy, can't sleep, etc -without him. I heard him tell Micah "She's very easy to take care of, because she doesn't even poop." Then he carefully covered her ears and whispered, "She's only stuffed with fluff, but she thinks she's real."
He is my oldest and my gentlest, the one I think will grow up and be a poet, my sweet five year old: Grey. 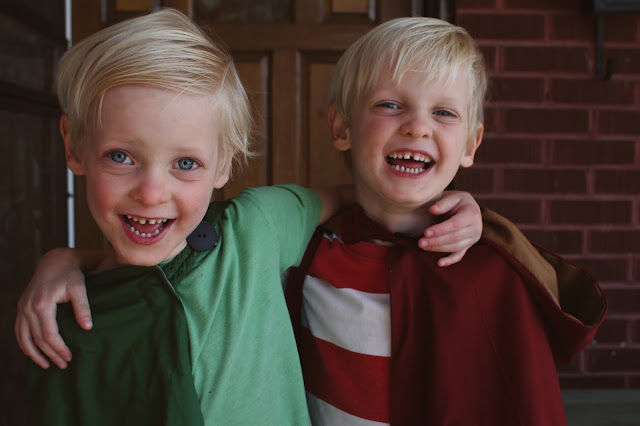 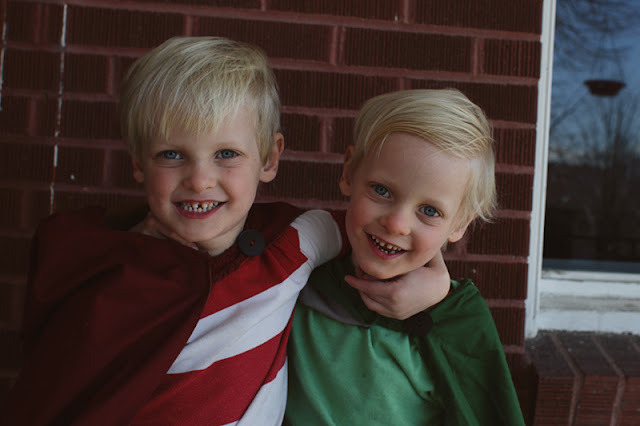 Micah is such a theatrical, passionate boy. He's so much like me! He wants to have everyone's attention and love, he wants to be admired and hilarious, and always surrounded by lots of friends. He directs their play (without being OVERLY bossy- I think) because he's so imaginative and adventurous and because he's such a natural leader. He always has fun ideas and will assign everyone in their group roles, and gets heartbroken very easily if he feels that someone is not including him or wishes he wouldn't play with them.
When it's just the two of us- he showers me with so much love and compliments, hugs and kisses, and wants to be touching, hand holding, tickling or snuggling all the time. He asks to "just snuggle together" all the time, and if I won't snuggle, he'll try to snuggle August instead. He loves to make August laugh and will try to pick him up and carry him around so that August will stay with him all day.
He has a quick temper, but he's also quick to forgive and to help when people are hurt or sad. He is SO helpful around the house, and is constantly asking "Am I being very useful? How can I serve you?"
He has a very good grasp on right and wrong, and will FIGHT if you contradict him (Gryffindor much? ) He wants to be making good choices all the time- and if you point out that he did something rude or unkind, he gets very upset and defensive, but usually tries to fix it right away too. When ever people don't do what he wants them to do, he threatens them "You're going to make Jesus mad!" or "You're choosing Satan's side!" which is fairly terrible and also funny! Because he thinks that's the worst imaginable insult and people are sure to change their ways and do what he tells them if he says that.
He loves to talk about the gospel and about choosing to act like people from the scriptures. But he's also sort of tricky and wants to walk the line whenever he's not sure if somethings really bad or not. He found the bag of Easter toys and candy before I gave them out, and was afraid to admit that he'd gone through it. Instead he told me, "I don't know. I think I looked a little, because August wanted to see- but I don't remember what was in there."
He has picked up reading SO quickly and often reads things off of signs or books, even though we haven't been doing school or practicing very much.
He always wants to pretend to be a hero from a story(while Grey is much more content as the sidekick.) He is Robin Hood, Batman, Peter Pan, Luke Skywalker, and Frodo always, and so he also always has his cloak on.
My middle child, my mini-me. My lover and fighter and knight-in-shining armor: Micah. 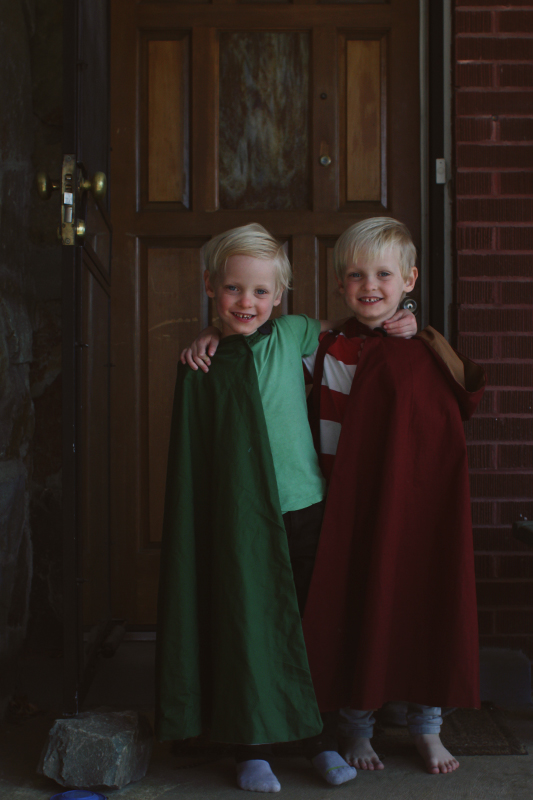