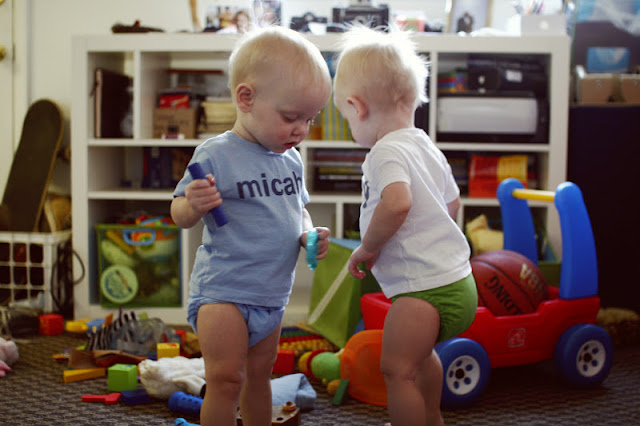 As you might know, I pretty much gave up on cloth diapers.
I did so for the following reasons:
1. They leaked SO bad.
2. My babies often poop four or five times a day EACH, and I couldn't spray it off without gagging, and throwing up 10 times a day is unreasonable.
3. I got really lazy... and would leave them in the bucket for days... weeks... and months.
In fact, there were dirty diapers in the bucket in the boys room since before Thanksgiving until ... Wednesday of last week, when I finally braved them. Seriously. Like 5 months. 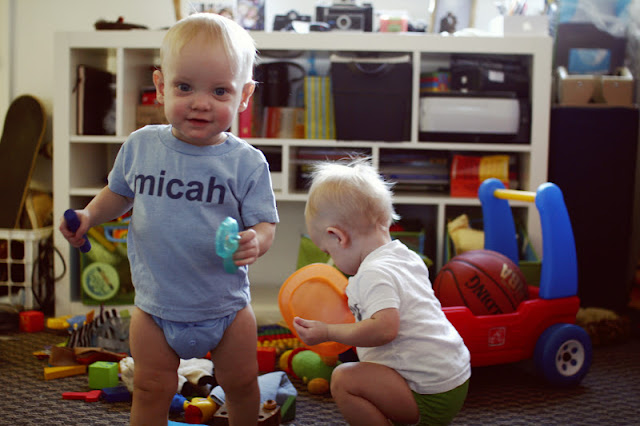 But summer is coming up, and I want to use the the cloth diapers because they're a bit cooler, and WAY cuter for pantsless bottoms, and my babies have toned down the pooping.
Plus, a lot of our friends have bought houses lately and it's encouraging me to be better about saving money, because I WANT A HOUSE, TOO. 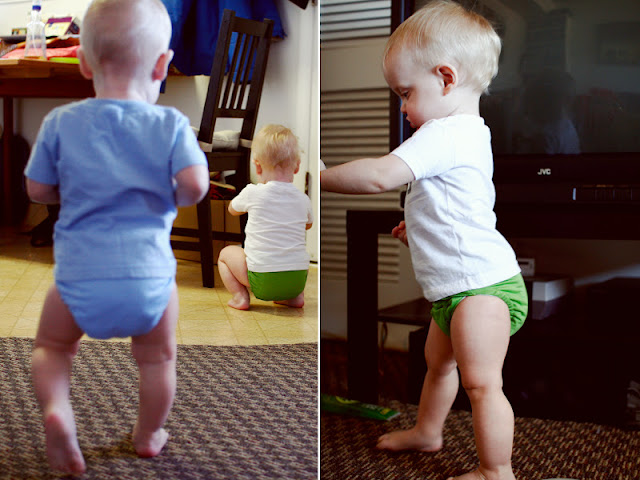 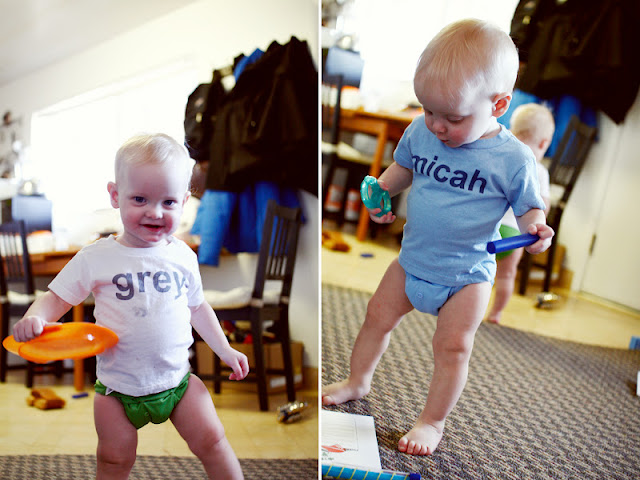 So I pulled out all the diapers, dirty and clean and washed them 3 times. No detergent. Just cold water, on the longest cycles my machine has, with extra rinse cycles, too.

And then I laid them out in the sun. 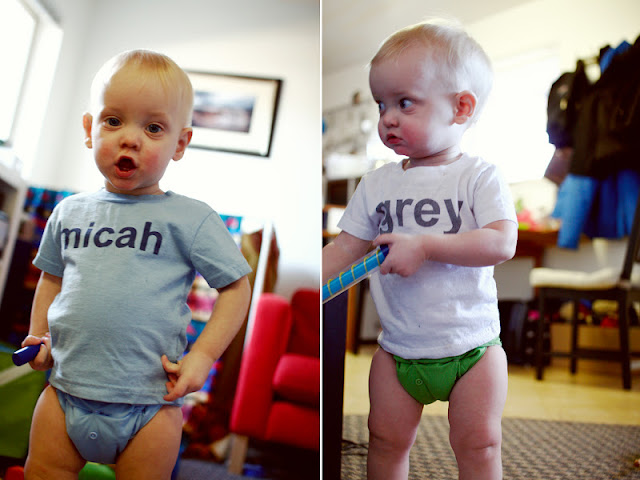 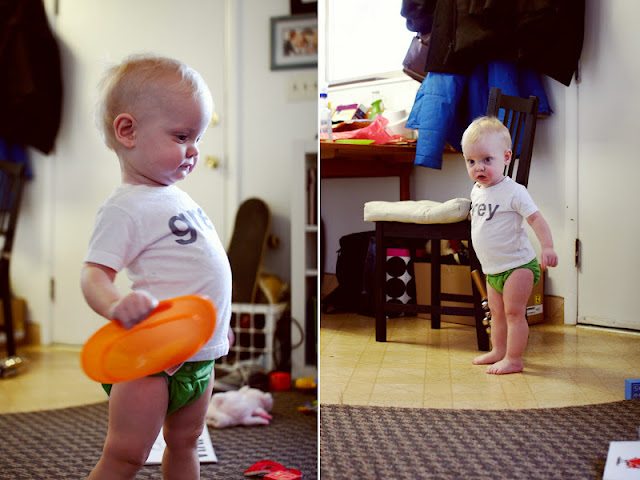 They seem clean and fresh to me, and so far there've been no leaks, so hopefully they've been stripped of detergent buildup from overusing soap to clean them.
And I have a really good system, where my boys sleep in disposables and then stay in disposable until after their first "morning poop."
Then there's usually only one more poop during the day, and sometimes not even that!

Sooo. Yeah. I'll keep you guys posted. Keep your fingers crossed for me, and help a mama stop being such a quitter.

Oh, and what I said before isn't strictly true.
I'm trying really hard to save money EXCEPT when it comes to buying things for our house to look pretty. Like picture frames and fabric for pillowcases. 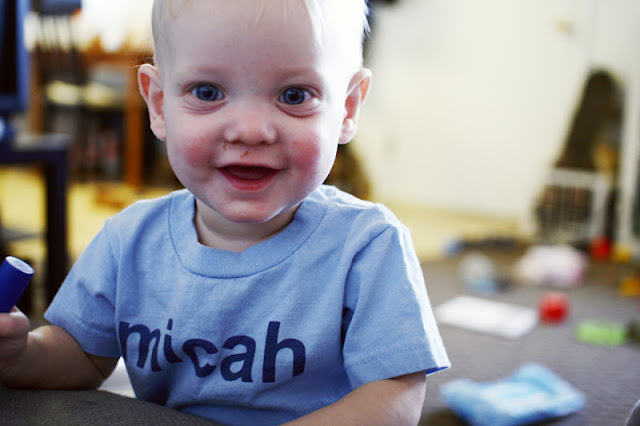 Oh, and love my babies adorable shirts? Enter the giveaway for a custom t-shirt already! Just click {HERE.}
And I wouldn't mind a little vote, as long as you're clicking around.

Posted by Becky Pitcher at 6:46 AM

Wahoo for cloth diapers! Just wondering, have you ever tried the flushable liners? I started using them last year and they seriously have changed my life. The poopy diapers are a BAJILLION times better. Seriously.

Ew! I'm sorry you've had cloth diaper trouble. (And my baby only poops once a day, so I don't have that problem) Good luck with the new detergent!

Good luck saving! I'm sure with babies its much harder to save money, but it only took us a few months to save enough. But its totally worth it. So save save save. Having a house is awesome!

I would love to hear more details about how your new journey with cloth diapers go. I'd like to cloth diaper my future kids, but I feel like I can't find unbiased opinions since it seems like no one has used both extensively, so people either LOVE disposables or LOVE cloth. After a few months, it would really be great to hear about your experiences with both disposable and cloth diapers, in more detail, pros and cons, honest reviews. I love your blog!

Your boys are adorable. I can't get over it.

just found your blog loving it. just started mine. love your little man holding the orange thingy he looks like a life guard haha. keep up the great work

We're the same way...we use disposables at night because it's just easier, and sometimes if I just don't feel like dealing with the stuffing the cloth dipes (we use BG), I won't. Also...I have so left diapers hidden in a pail for my hubby to find and wash after I went out of town, and I felt bad, but there was just something in me that couldn't deal with them at that moment!

Like I mentioned in a conversation before, it is a lifestyle choice! Stick with it. Cloth diapers 24 hours a day! Poop and pee happen, its not gross, yes it can be smelly but not if you keep on top of things. Just remember you are doing what is best not only for the Earth but for your baby's buns. Best wishes!

I LOVE cloth diapers! I know the ick factor can be kinda high, but poop happens! You'll thank yourself later when you save hundreds of dollars! You can do it! Also, if you need/want more diapers so you don't have to wash as frequently, I highly recommend Rump Arounds cloth diapers. They're really nicely priced compared to Bum Genius/Fuzzi Buns, and work just as well! The CDLC (Creme De La Creme) version of Rump Arounds are AWESOME at containing poop, too. I'm actually hosting a giveaway for a CDLC next week on my blog. :-) I also have a WAHM cloth diaper giveaway going on in a couple of weeks. I highly suggest you enter! If you win, you'll be able to try out other types without spending money! :-)

Anyway, good luck with round 3 (?) of cloth diapering! You can do it!