Your last day to vote

Have you made your guess on my poll yet?
Today is your last day to vote because tomorrow we will know!

I still think signs point to "boy" and here are all my reasons.

Second: Supposedly you aren't as sick when you're pregnant with a boy. I've been tired, sore, and pretty nauseous but nothing compared to my mom, and I hardly ever throw up.

Third: EVERYONE else is having boys, and babies come in waves. I think that is true. Yesterday at church we had the Primary Program (all the little kids spoke and sang, so cute!) and they were all standing by age, but you'd think they were standing by gender. Only girls one year, only boys the next. It was bizarre.

Fourth: Generational waves, by which I mean that my paternal grandma only had sons (five!) and all of her boys mostly had girls (only three boys to ten girls!). Now only one of those cousins has kids, but she has two boys and a girl so far... so logically I should also have mostly boys. We're switching off generations.


But Travis and my mom are both pretty sure that I'm pregnant with a girl:

Travis has flipped point THREE and said since everyone else is having boys I am probably having a girl. (Someone has to, right?)

And my mom is looking at her side of the family's generational waves, in which the first born is always a girl, apparently.

And I keep having dreams that I'm pregnant with twins - a boy and a girl.
But that's almost impossible, since we only heard one heartbeat... but not completely impossible.
And don't pregnant women usually have some sort of intuition about this? Maybe made manifest in their dreams?

Or maybe I'm just going crazy from not knowing.
Soon enough I'll be able to go crazy from knowing (the type of insanity where I buy and make lots of pretty and awesome things non-stop and don't do any school work because I'm thinking about my baby).
And by "soon enough" I mean TOMORROW. 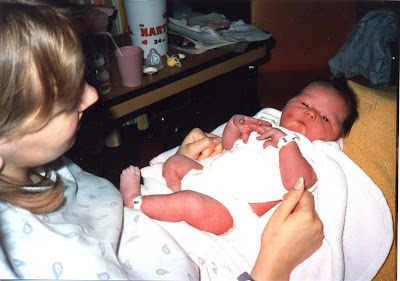 Also, this is a picture of me the day I was born.
Maybe our baby will be fat and hairy like this.

Or maybe our baby will be skinny and bald like his/her daddy: 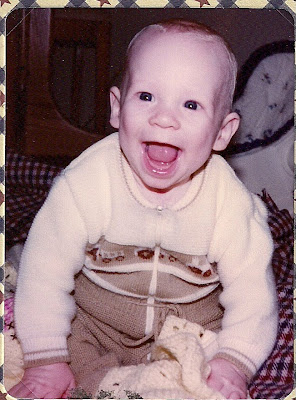 your sweet little baby face is swollen from the ordeal of being born. You look like a little indian baby, and Travis looks exactly the same. So happy. I'm excited for the news.

Notice I have cross stitch on the table next to me. Oh those were the days when I actually had time for hobbies.

You are totally having a boy. :)

please have a fat baby not a weird skinny long one. Either way I know I will love and like it but I want a fat one.

Everyone told me that boys make a sicker pregnancy so I was sure I was pregnant with a boy this time because I was waaaaayyyyyy sicker! But nope, it was a girl and she wants her presence to be known that is for sure.

You were sooooo cute!!! I have newborn pics of Travis. They are in his book. I kind of think it is a girl but we will be thrilled with either. But please not twins. Camille's baby James has worn me out. I think I'm getting old. Yep, I'm a Grandma!! yea!!

Boys do seem to be the trend lately. I know someone who was told they were having a girl and then a few months later they told her it was a boy.

i can't wait to find out!