My babies both have the hiccups right now

No guest post today, sadly. I thought I had one coming in this week, but maybe I asked two women to write them for next week.
Oops. My bad.
Instead, to pacify my hungry readers, I started getting really creative in photoshop to help illustrate a story for today.
This story is called "Why Becky doesn't sleep at night, and why she often gasps in surprise as though she's suddenly had the wind knocked out of her."
Alternately, we can call it, "Why nurses at Timp Hospital hate Becky's adorable twins" subhead: "Three-hour Non-stress tests."

As you may recall, I had an ultrasound on Wednesday. At the beginning of the ultrasound my babies were positioned like this, essentially: 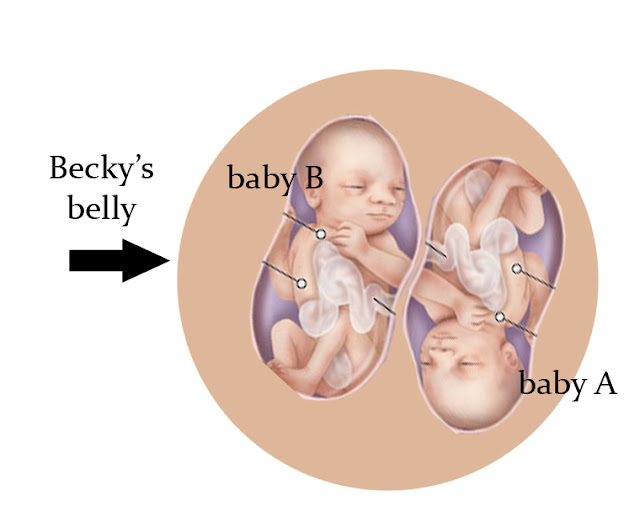 Now, baby A is a very good baby.  He just chills upside down, and doesn't hurt me except occasionally with a good kick to the ribs.  He gets the hiccups three or four times every day, (and usually a few times a night) but he just hangs upside down and takes it. He'll have the hiccups for sometimes an hour at a time.
It starts to drive me crazy, but I also love it and think it's the cutest thing ever. So we deal with it.
Baby A has been patiently waiting (and perfectly positioned) to be born since my 24 week ultrasound. He's head-down and perfect and wonderful.

Now baby B on the other hand... he never stops moving. He gets the hiccups very rarely but when he does he'll have them for about thirty seconds before he begins thrashing, kicking and using my ribs as a ladder to climb on out.
I don't think he likes the hiccups.
And I certainly don't like when he gets them, because it's a very painful experience. Even though I still can't help but think it's cute.
Man, they're cute.

But, back to the ultrasound: We were told that by 25 weeks twins are usually so squished that they can't change their positions. And by 30 weeks they're absolutely staying wherever they happen to be.
Well, within a half-hour of the ultrasound beginning the boys were positioned like THIS (see how baby B is suddenly head-down?): 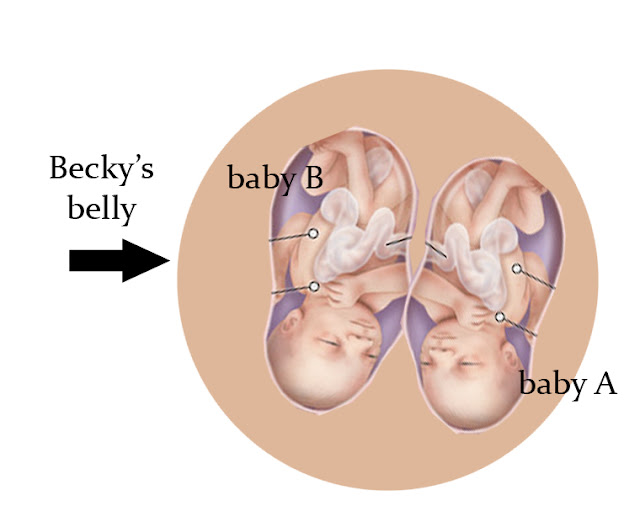 The ultrasound technician goes "Huh, look at that. Can you feel him moving?"
Is this a joke?
YES. I CAN feel that. Very much so.

So then yesterday I had another Non-stress Test (NST) which could potentially take a mere half hour.
All they need is to hook me up and monitor the boys heartbeats for a solid twenty minutes.

Like always, they quickly found baby A's heartbeat. He's a good little boy who is too smashed by his brother to move.
But after 2 hours and four nurses trying (and failing) to find both heartbeats for more than a few seconds, they finally had to wheel in an ultrasound machine to find out where the heck baby B had gotten to.
And the boys were positioned like this: 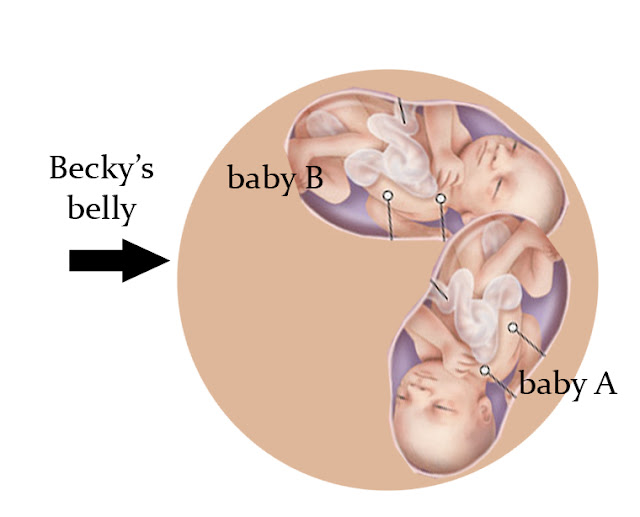 Seriously.
My stomach is big.
But you'd think this baby wouldn't have TOO much space to hide, wouldn't you?
You'd be wrong.
And I have some really crazy babies to look forward to.

And notice all that empty space on the left side of my stomach? These are very snuggley babies, and my stomach is very contorted and lopsided from them both insisting on being on the same side of my belly.
It's kind of freaky-looking, to be honest.
Oh... baby B. I love you.
But you are already a maniac.

(Oh, and that slightly creepy widget to the right of this post that shows the babies floating around inside me? It is highly inaccurate. They aren't just floating around, bouncing off the walls of my uterus.)

I think that B inherited his father's knack for being a trouble-maker. Just know that it is not intentional. We don't mean to stir up trouble, we are just curious. I am VERY excited to get to see what kind of trouble they both get into very soon.

You guys are going to have so much fun. (Said sincerely mixed with a bit of sarcasm)

Bahaha You know this is what they're going to be like in real life right? Julian was my Baby A-positioned just like yours. He didn't kick much or get hiccups much-every now and then I'd get clocked pretty hard but that was it. Isaiah was my B and he was crazy. He didn't change positions much after awhile BUT, he kicked me like crazy in the cervix pretty much all the time. Felt AWESOME. I remember him doing it once in the shower and I thought his foot was out. It hurt so bad I flinched like I just got punched. And he had hiccups every 5 seconds. And this is how they are today. He is crazy and Julian is chill.

It's crazy how many NST's you have...and I wonder why I never had a single one??

Had to laugh! My baby C was nick named "trouble", because she would somehow hide when they went to do the NST, everytime! It got so bad that I would ask for the thingy and find baby c (Cadence) with no trouble. She'd be everywhere though. Don't know where she found the room, but she did!

So was I suppose to be your guest post today? I read that and was like, oh yeah! Anyways, sorry, let me know when you want me to do it!

Of course they have ADHD, they are boys aren't they!! They will be soo cute and fun though!

Becky! I found another momma of twin babies! And she lives in NYC! Now every time I see someone with twins I think of you, so... here you go. :)

Sweet little babies. It is so exciting!

This is the funnest and funniest post I've ever seen with pregnancy. Becky! I'm so excited for you! I can't wait to look at pictures when your snuggly, one-sided belly boys come. (: