Eek! I am freaking out! As I was typing this I noticed an ant crawling across my keyboard, and he just went right under one of the keys!!
I tried to squish him out, but I'm not sure if he's dead or if he's living in my computer!
Can that happen?! Yikes!!

Okay.
He's not making a reappearance, so I'm moving on...

Today I finally got new glasses!
The story really begins two summers ago... when I bought my last pair of glasses. They were cheap, goofy frames from somewhere I hate to shop, like American Eagle.
And I put my lenses in them, and was complimented on them all the time and decided I look hip and chic in oversized glasses.
I grew to love them.

I loved those glasses. I wanted to wear them forever.
But about a month ago they broke irreparably. Into several pieces.
Plus they were starting to look pretty pathetic.

I hate contacts, but every time I tried on different glasses they looked so bad! I just wanted the exact pair I used to have, but I couldn't find them anywhere.

Finally, On Monday morning I decided to go out and buy glasses, no matter what.
I am sick of contacts.
And I wanted to get some new frames before the babies are born and my medicaid stops existing.
So I did.
I had to go to several different places, but may I present the new and improved face of Becky Pitcher: *drumroll* 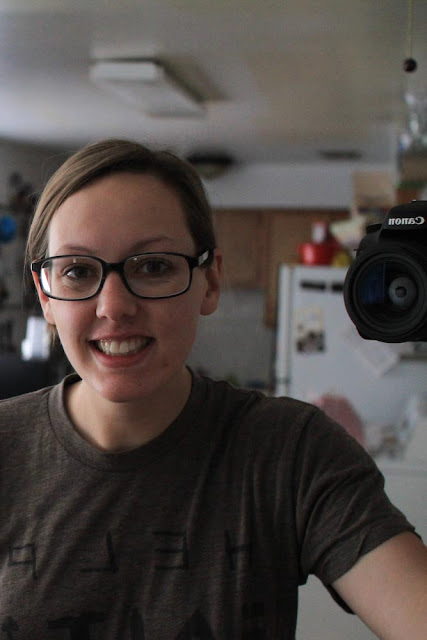 Okay, yes. They're ALMOST exactly the same as my old ones (which can be seen here, if you'd like).
But not quite.
And I just saw another ant.
We knew there were ants here, but we wanted to wait until after I stopped being pregnant to use ant poison... I have changed my mind.
They're getting too brave.
They must die asap.

They look great and vinegar works for ants. Am I good enough friends with you to visit you after your babies are born?

You are really cute in your new glasses!

Just a hint for the ants... get a coffee mug and pour bleach in it... Ants HATE bleach! :-) It's safe for your pregnancy and it keeps those pesky things away! :-) If you've got animals that may try to get into the bleach... put saran wrap around the top and secure with a rubber band... then poke holes in the top with a fork. Good Luck!