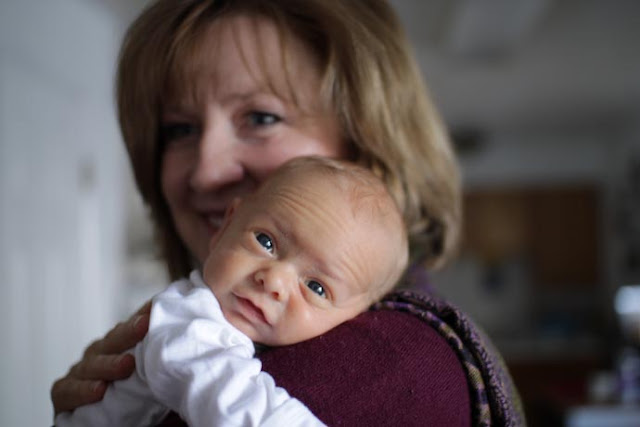 In the Mormon church, after a baby is born the father of the baby (or in some cases Grandfather, or other family member) gives the baby a name and a blessing in front of the church.
Essentially, it is an opportunity to pray publicly for the baby, asking for certain things in the child's life, like happiness, strength, faith etc. and to announce the baby's name.

Usually it's done at church on Sunday, a few weeks after the baby's birth - but since our boys aren't supposed to go out in public we were able to have the twins' blessings in our home this last Sunday.
Only our siblings and parents attended (and there were still over a dozen people in our tiny apartment), but it was the first time we'd all been together since the boys were born, and it was the first time Travis' brother Tate had even seen the boys (except through the NICU window)!

Sadly, two of my sisters weren't able to come, since Lisa is in Asia and Mary is in Idaho.
Anyway, so far this post isn't exactly wordless...
But here are some pictures of the boys and their family. We love them all so much! 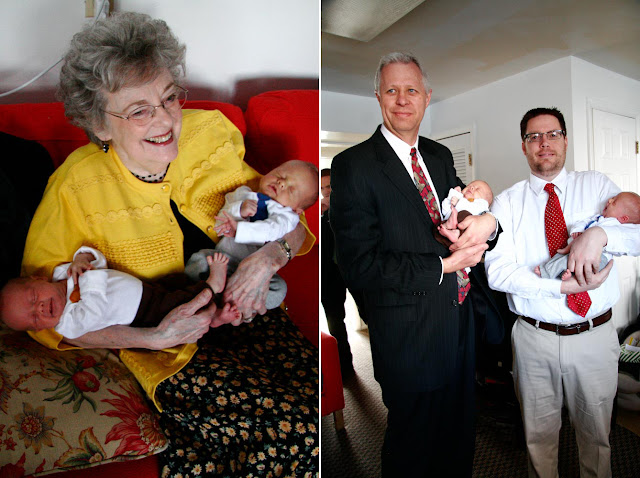 Above is Travis' Grandma. She has four sets of twin-grandchildren! All of them are identical, too, which means every time it was a fluke. (Identical twins don't "run in families," since having eggs that spilt isn't an inheritable gene.) Crazy, right? And Travis' dad (Dave) holding Micah David, and my dad Chris holding Grey Christopher.
Oh man, those Pitchers are tall. 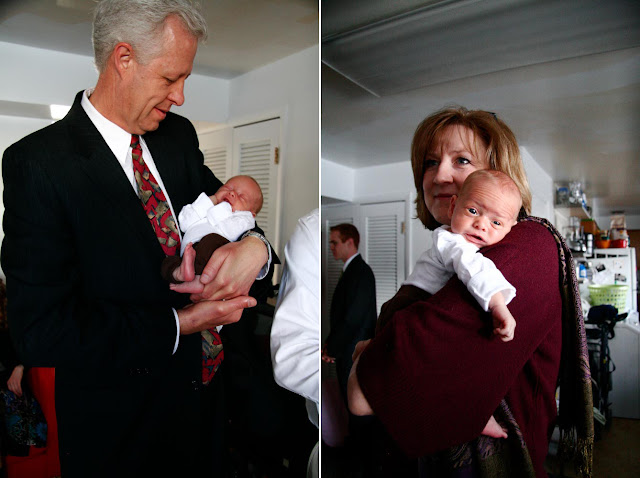 Travis' parents, both holding Micah. Micah was SO alert, and he loved being held by his grandma.
And he looks like a little monkey. I wish you could see how long his fingers and toes are! 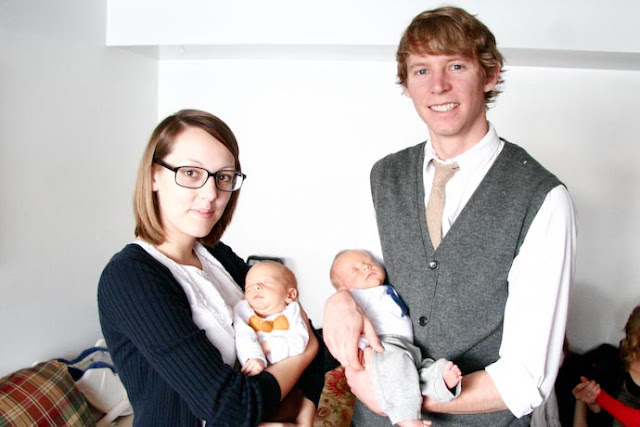 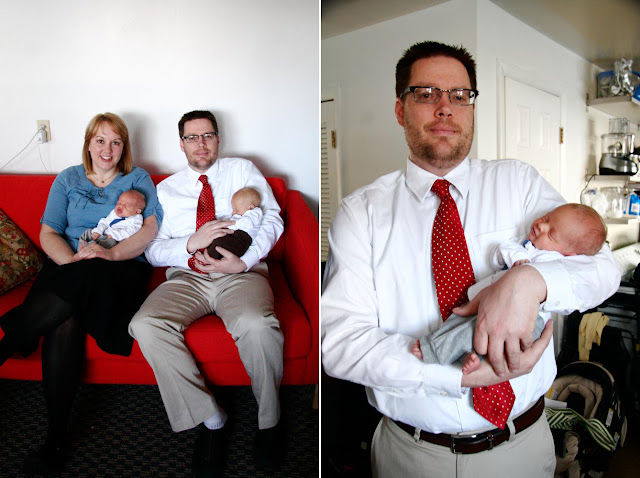 My parents holding the boys. Grey looks so content being held by my dad (the pic on the right) but I think he's pooping or something in the pic where my mom is holding him, haha. Poor Grey. 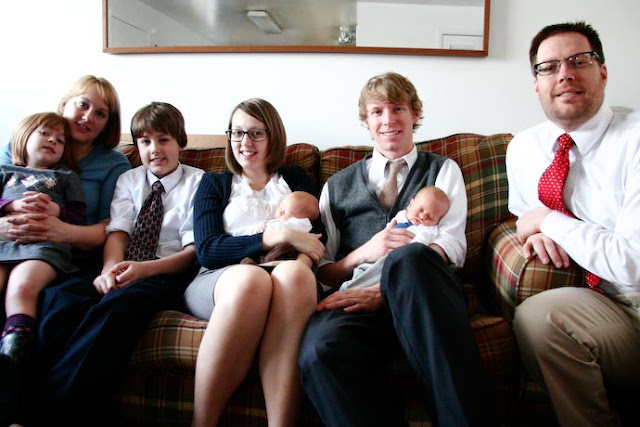 This is my family (minus Mary and Lisa), and for some reason we thought sitting down for this picture was a good idea. It's not a very flattering angle. 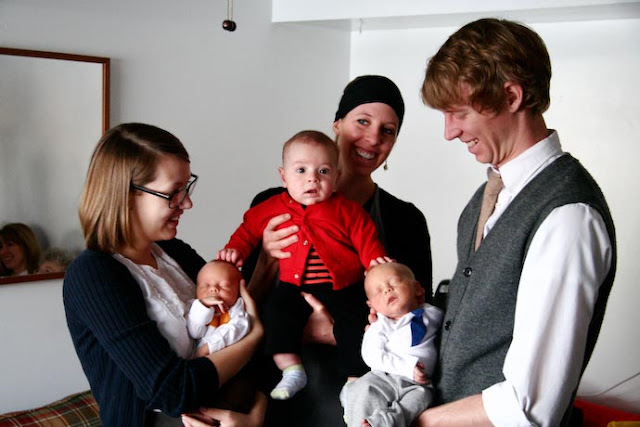 This is Travis' sister Camille and her son (the boys' only cousin!) James. James was born in November, so he's only four months older than the boys, but he weighs as much as both of them combined! 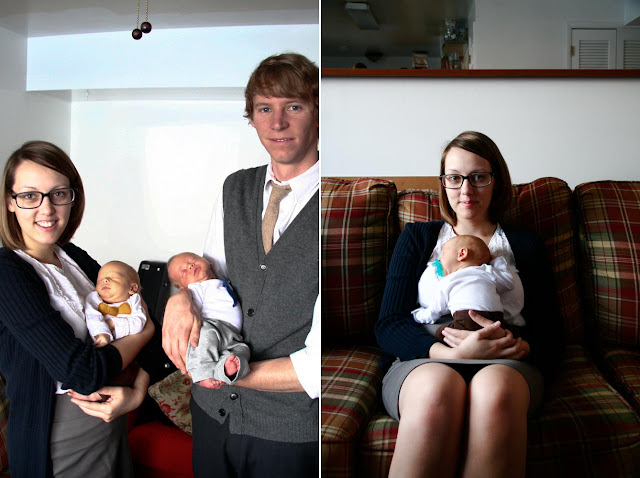 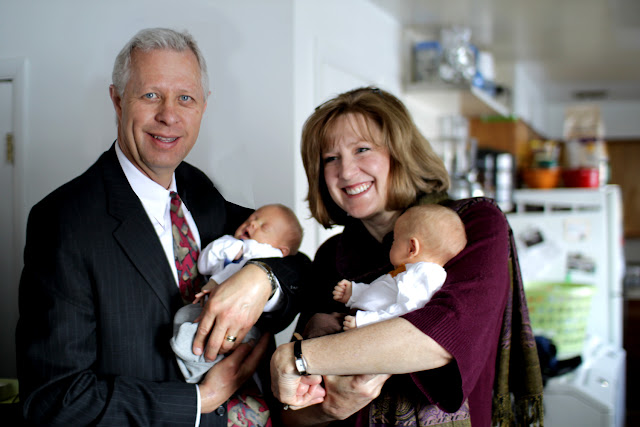 I'm excited to see who the boys end up looking like, since clearly both of our families have very strong genes.
Pitchers look like Pitchers and Froelichs look like Froelichs.

Such great pictures!!! What a great and wonderful time in your lives. Cute names, cute bow and tie. Thanks for sharing...you look amazing.

Such nice photos of everyone! Wish we were there too!

I found your blog through the Spearmint baby Blog hop! Beautiful photos and even more beautiful babies! I am loving your blog! :)

Lovely photos! The babies are beautiful and blessed to have so many people who love them.

I'm a new follower from the blog hop!
Hope you can hop by (when you have time) and visit me:
http://stylendecordeals.blogspot.com/