My babies are monsters.
And by that, I mean, they are gigantic.
Our neighbor brought home a new baby and she weighs 7 and a half pounds.
And I looked at her and thought "I have never seen such a tiny baby."
But my babies were two pounds smaller than that when they were born.

We went to the hospital in Salt Lake to visit one of my childhood friends and her new baby, Gabe.
Gabe is in the NICU and only weighs 5lbs 2oz. He weighs more than Micah did when he was born.

I saw Gabe, his little hands and little feet.  The tube down his nose that I recognized so well, and the IV and the fuzz of long thick newborn hair (which my boys have lost).
And I started crying.
And after we left I cried a bit more.
Because I have two babies.
And they are six months old.
And once upon a time, they were little and perfect and tiny and weak.
And now they are not. They are huge.
And it makes me cry. 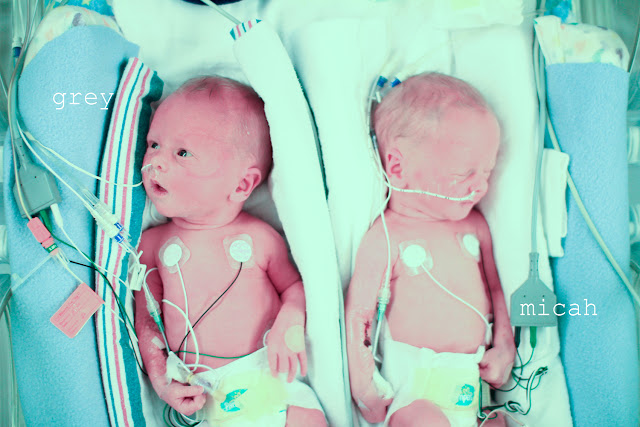 These are my babies when they were three days old. The coloring is wonky, because I forgot to White Balance... don't judge me. I was still on lots of drugs. :)
(And don't tell my husband or my mother-in-law but the first thing I thought was "I want another newborn." And then I had another sleepless night and remembered that I do NOT want another newborn... yet.)

And give us a vote if you have a second!

Oh sweet little babies. They grow too fast. I love that picture of them it is so tender it makes me want to cry too. I understand all too well how quickly they grow up, cuz look at you! Every time you post a new picture I can't believe how much they have changed. I hate being so far away.

As soon as Scarlett came out of my body and I was high on just having a baby I said I wanted 5 more babies! And then after Scarlett was 1 week old I cryed and wanted another newborn.
They get big way too fast.

I want to hold them before its too late. Otherwise I will be the weird distantly related cousin that asked to hold both those boys when they are 9. I DON'T WANT TO BE WEIRD, BECKY!

Reading this made me cry Becky! My girls were tiny too - not as tiny as some I had seen there - but tiny enough to break my heart every time I saw their sweet little faces and touched their little bodies. I know how you feel and I cry because I'm sad about it but I also cry because I know that we are so blessed to now have big healthy babies. *sigh* I didn't know being a mama would be so bittersweet right off the bat!