As most of you know, I rarely post recipes, but I couldn't help myself! This is our new favorite meal and we eat it almost every week.
Since we're trying to cut our grocery budget, I've made a goal to eat vegetarian meals three times a week... but MAN, we love meat in this house! Especially during the summer, when soups, casseroles, and pastas are usually too heavy, and we have an excellent grill sitting right outside our front door.
So it's really hard to find a meatless meal that we all want to eat, but we've done it!
This started out as an idea for quinoa and veggie-stuffed peppers, but when Travis brought home two very misshapen and unstuffable peppers from the store (I hadn't told him what they were for), they got chopped up and added to the salad.
And I'm a pretty spontaneous cook, so sometimes there's a zucchini added to the salad. Sometimes we squeeze limes over the top, or use canned tomatoes if we're out of fresh ones. Sometimes the quinoa is made with broth, and sometimes water...
Generally, just use what you have on hand! 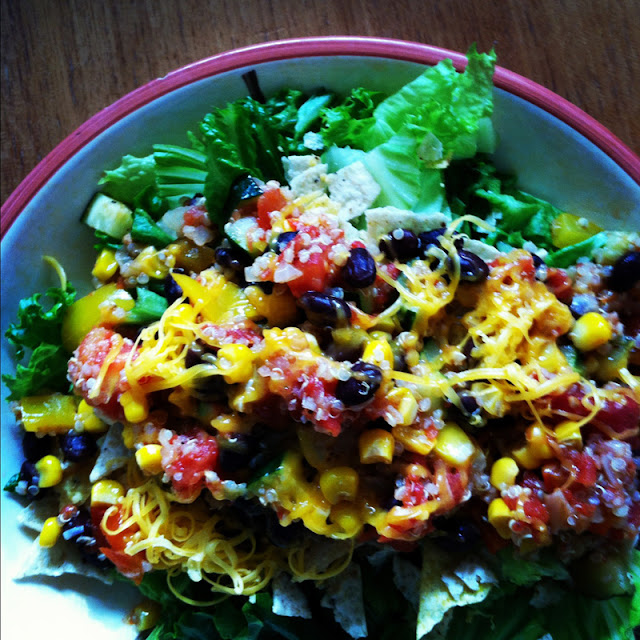 Ingredients:
1/2 cup cooked quinoa or rice. (This can be done days in advance, or you can just use leftovers from another meal! I use {these instructions} to cook my quinoa.)
1 can black beans, drained and rinsed
2-3 small tomatoes - diced
2 sweet bell peppers (preferably not green, even though they're cheaper!) - diced
1 medium onion - diced
Very much garlic - minced.
a Handful or two of frozen sweet corn
1 small bunch of cilantro - shredded, or minced, or whatever it's called when it's torn up small.

Your taco seasonings of choice (I usually just use cumin, garlic and onion powder, and salt and pepper)
And then lettuce, cheese, chips or tortillas - however you want to eat the salad!

Instructions:
Sautee the peppers, garlic, onion, and whatever else you have included that is sautee-worthy (like if you've added chilies, diced squash, or fresh corn) with the seasonings and LOTS of cilantro. (Use a handful more of cilantro than you think you need. For real.)
Then add the tomatoes (if you're using canned tomatoes, include most of the liquid, but don't make it soupy), the rinsed black beans, the quinoa, and the corn.
Stir and cook until everything is heated through.
Serve over a bed of corn chips and lettuce, or wrapped up in tortillas with lots of cheese, and a squeeze of fresh lime.
Enjoy!

And also, who knew quinoa was pronounced Keen-wah?
NO ONE. That's nonsense.
It should be pronounced quin-oh-ah and we all know it.

Posted by Becky Pitcher at 8:53 AM

Still haven't tried keenwah yet... just branched out to whole grain rice last week. but this salad looks amazing. we are trying to keep our budget in check also, and using lots of frozen foods that we already have/ not buying meat.

ps. funny thought about the pronunciation of quinoa. i watch the bachelorette, ashamedly, and they had quinoa for their dinner and one of the guys trying to sound smart because no one knew what they were eating was like "is this quin-oh-ah" and anyway, funny. i too think it should be 3 syllables.

Yum! However you pronounce it, I'd like some! Obviously the boys are enjoying it!

Thanks! Now I know what to make for dinner tonight :)

This was delicious, thank you for the recipe! We just made it for dinner tonight and it made a massive portion for the two of us but we each had 2 tortillas filled with it because it was so good!