First, sorry there are only 5 pictures and they're all the same! I kept trying to take more pictures through out the day, but these ones that I snapped at the temple today are the best we ended up with. Can you believe these cute little boys are A YEAR AND A HALF today?
Cray cray. Yeah. I said cray cray. 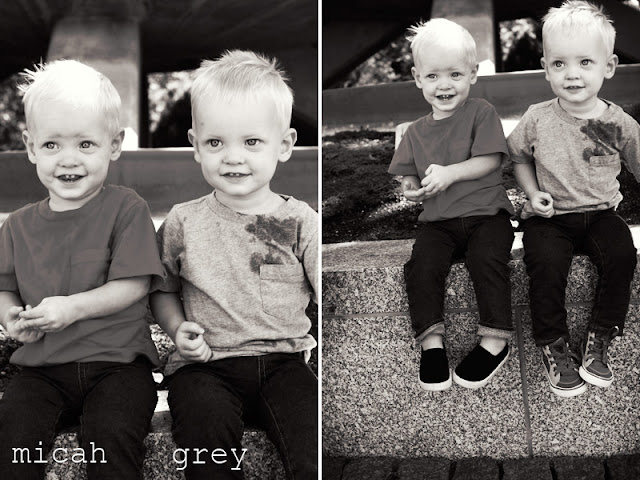 The amazing thing about the last month is, to probably everyone except Travis and me, our boys would seem to be almost the same as a month ago.
And yet, I feel like they've made HUGE progress in some things.
Like speaking.
They still don't speak very much. Each month I write a list of words that they can say, but really, even though I write that they say "Mel" for milk, they'd probably only said it two or three times, and only if forced.
They just don't say much. They communicate really well through grunts, pointing, and nodding and shaking their heads when I ask questions.
But this month, I feel like it clicked. They still don't really speak much, but I think that they suddenly understand the point of talking.
Occasionally, Grey will even say please (eeease) and thank you (dit-doo), which is so cute that I usually give him whatever he wants. No matter what.
Candy? Well, since you said please, here is an entire truck-full!
They know lots of new little words, so much that I can't keep track of all the one's they've learned.
Grey has learned (or, at least, says) a lot more than Micah this month, and most of these words are his:
Helicopter (copa-copa), truck (tuck), cheese, sand (san), uh-oh! snorting like a pig, and chirping like a bird.
They've started chirping and squaking every time they hear birds, and they start pointing at the sky and yelling "OOOH!" every time they hear a helicopter. We lived really close to a hospital, so there are lots of helicopters flying over our yard, and they've quickly become the boys' new favorite thing.
They've also both started being really good about telling us when they want their diaper changed (but especially Micah) and then lying down and letting us change them! They either say diaper (die-der) or they pull and yank on their diapers until we notice them. 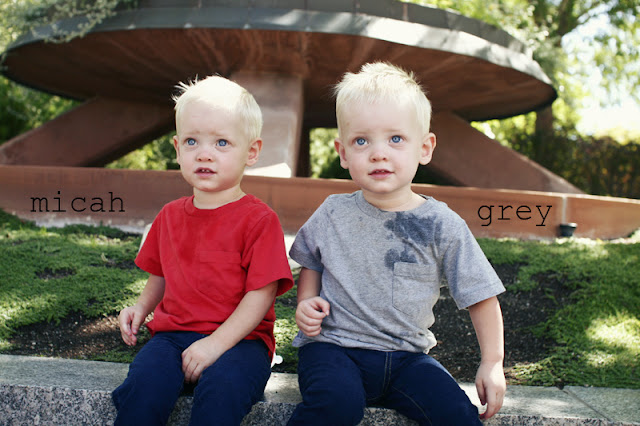 But my favorite thing that has happened this month, is that they have discovered that they love books.
Before now, they liked books. Specific books. They sometimes liked to read a bit of a book, and they really liked "I Speak Dinosaur" and some animal picture books.
But now, they want to sit in their room and read. All.The.Time.
They look through book after book! They have the patience to read the whole thing, and then look at another one! Grey has started pointing at the words and pretending to read along to himself.
OHMYGOSH. It's so cute that I want to die every time it happens.
They take books to bed with them now. I let them each take two books, and they sit in their beds and read until they fall asleep slumped over their little board books.
Almost every single time they go down for bed now, I sneak in afterward and they are laying with a book propped open on their pillow and another underneath them. They fell asleep reading and it is quite literally, the cutest thing that has ever happened in the entire world!
Maybe that doesn't seem like a huge change, but I feel like it's indicative of a slight shift in their personalities. They're a little more patient (sometimes...), they're a little quieter in going to sleep, they're a little calmer at playtimes.

They've also been switching personalities again! You may not know, but once upon a time, Micah was really outgoing and adventurous, and Grey was really reserved and clingy. Then they switched. Micah was a super clingy Mama's boy, and Grey was the one walking on his own and refusing to be carried and always exploring - while Micah got snuggles. They've been in that stage (Micah=clingy, Grey=adventurous) for months now! Since last winter, it seems like.
And in the last month, we've been shifting back to the first state. Grey is still a bit more dominant, but he wants to be held, loved, and protected when we go out, and Micah is a little more willing to walk and not be carried, and let strangers play with him.
It's nice that they take turns, because sometimes I find myself thinking "I wish I could be giving these boys equal attention, but one of them just wants me all the time."
And lately, that baby is Greybee.
(Did you know that we call Grey Greybee? It started out as "Grey Baby" and then merged into "Greybee," and in fact, we now call him lots of things that have sprung from "Greybee," including "Greyb" and "Greybes") 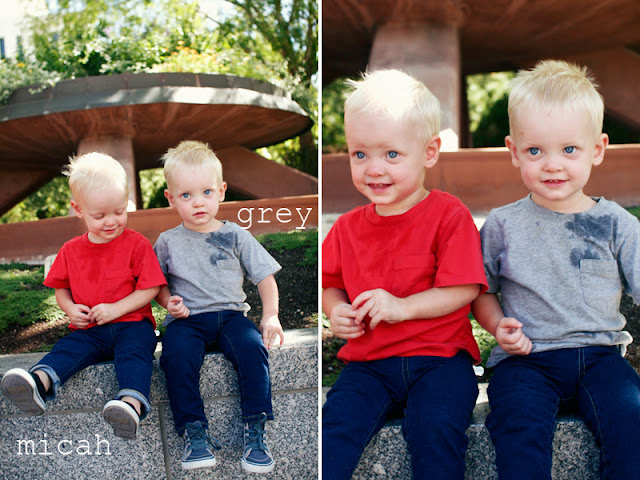 They're still a little crazy, but we've been really consistant about time-out, and now if we say "If you do that again, you have to be in time-out" THEY STOP BEING NAUGHTY. Holycow. It's the best. There are some things (like throwing food, or hurting each other on purpose) that they don't get a warning for, and after they do it, I put them in time-out immediately, and they always go and sit in the corner and usually they don't scream, try to escape, or play.
Sometimes they'll even put themselves in time-out if they make eye-contact with me after they're naughty, but I don't say anything. They'll trot over and sit in the corner until I go and get them.
IT'S THE BEST THING EVER.
It's really cute. And it's working pretty well. The only thing that is difficult, is punishing them when we're in the yard or out of the house. I just don't know how to put them in time-out at the zoo, for example...
Ah well. I guess we'll figure that out. In the mean time, my children are making up for their occasional naughtiness by being the cutest ever.

Posted by Becky Pitcher at 7:53 PM

oh the twins are so big now!

Of course you do an 18 month post the day I ask how old they are! ;) They are starting to look like toddlers and not so much babies anymore! Getting so big. Is Grey bigger than Micah? looks like it a bit in the pics!

Wow, great post! I love hearing about all the things they are doing! Kisses from me!