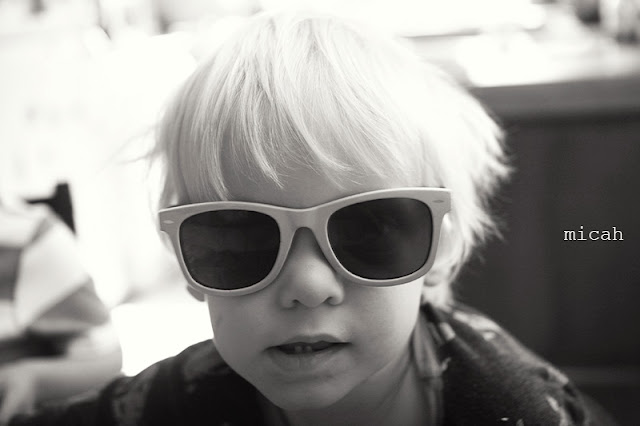 Over the last months, Grey and Micah have gotten a handle on words.
They can name items, request food, and answer basic questions like "Do you want a sandwich?"
It's been pretty awesome.
But in the last few weeks they've moved on. They aren't just stringing together words, they're having conversations.
Just today, we had so many little moments of conversation that couldn't have happened even a week ago.

We were sitting outside, and Grey got up and started walking towards home.
"Hey Grey!" yelled Micah, "Where going?"
"In house, Micah!"

Or when Micah called to his brother from another room, and Grey yelled, "Coming, brother!"

This morning the soundtrack from Brother's Bloom was playing, and Grey noticed it. He cocked his head to one side and closed his eyes to listen to it. "Oh, music," he said. "Pretty!"

Micah couldn't find the Trucks book he'd been reading all morning.
"Mama, Truck Book?" he asked.
"I don't know where it is," I said. "Do you remember? I'll go check for it."
After a moment of thought he said, "Book walk. Stroller."  He was right. He left it in the stroller after his walk.

A bit after that, Micah pulled on his rain boots, put his flashlight and sippy cup in his bucket and slung it over his arm, and grabbed a ski pole to use as a walking stick.
"Bye, Mama. Love you," he said. Then he opened the front door and walked out.
"Wait! Where are you going?" I asked, pulling the door back open.
He shrugged, "Out." Then waved again, "Bye Mom. Bye Grey." 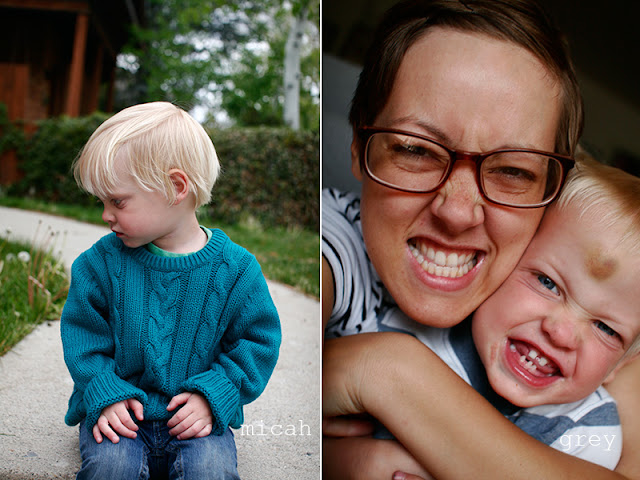 My favorite little sentences are ones that start with I. Like, I want, I see, I have, etc.
The other day we biked by a river and a cool breeze hit the boys and me.
"Oh, the water makes the air cold!" said Travis. "Can you feel it?"
After a moment of thought, Micah said, "I feel it, Daddy."

They've also started yelling "I did it!" after they accomplish anything. Grey climbed the little rock wall at the park, and when he clambered over the top on to the playground, he jumped in the air and pumped his little fist. "I did it! I did it!" he yelled, "Great! Great! GREAT!" 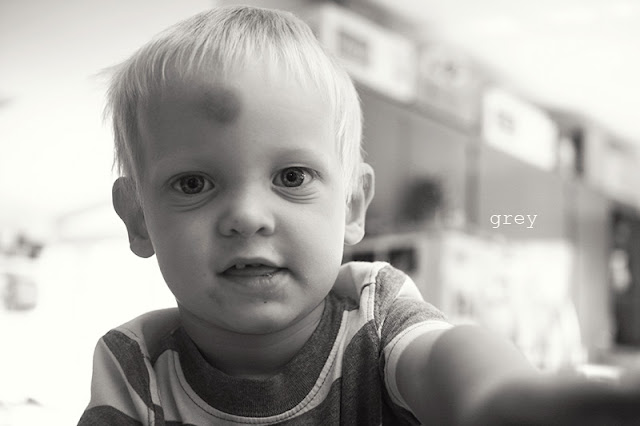 It's just so cool to hear them, not only understand us, but form thoughts of their own. They have ideas and they want to express them.
They've played pretend a bit in the past, but I think this new understanding of language is increasing their creativity as well. They have started pretending to make lots of different "food" (of dirt, or fabric scraps, or soapy water) and want us to "eat it." They tell each other jokes (I mean, I assume they're telling jokes I don't get the punch line of.) And they've started making and requesting that I make goofy faces or dance like a crazy person a lot. And I think all of it is connected. All their silliness, creativity, and language are bundled up together.
And oh, how I love it.


** As a side note: Have you ever seen little boys with as many goose eggs right in the center of their foreheads as my children? I think the reasons for this are many:
1. They usually fall when they are running, not toppling off things, so it's always right in the middle of their face.
2. They are little hoarders and almost always have their hands clenched around some precious thing that they will not drop to catch themselves. Thus, they catch themselves on their faces.
3. My children are kind of maniacs. There is no "Slow Mode" so they run until they crash into something, then they cry, then they do it again.
4. Maybe it's their complexion that makes bruises show up so much? Anyway. Grey got that nice bump racing down the sidewalk. Just a day after he ran so hard that he had to stop and throw up his dinner. And two days after he ran so hard that he had an asthma attack. Seriously, kid. Sometimes it's okay to just walk.

Posted by Becky Pitcher at 1:03 PM

I love the "out" conversation. My 18 month old is a little hoarder too! I hope it's just aa stage.

I love this post! Love hearing about their speech growth. Really cute!