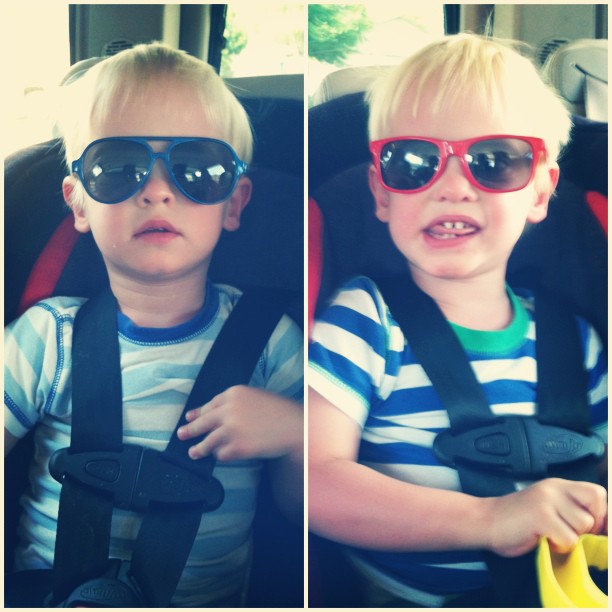 The boys have developed all these funny new quirks when speaking. They haven't quite figured out sentence structures, but they're trying really hard.

Lots of their current sentences are phrased like this: "I did it, the object."

Speaking of Diggers, Micah is OBSESSED. Most machinery, construction equipment, and vehicles get him excited ("Dumptruck! Crane! Cement mixer! Fire Engine! Garbage Truck!") but nothing quite like Diggers. He'll shout "Digger! Digger! Digger! Oh, Daddy, Digger! Digger, Daddy!" for five minutes after we see an excavator.

All it takes to stop a full blown tantrum are the words, "Look, a digger!" 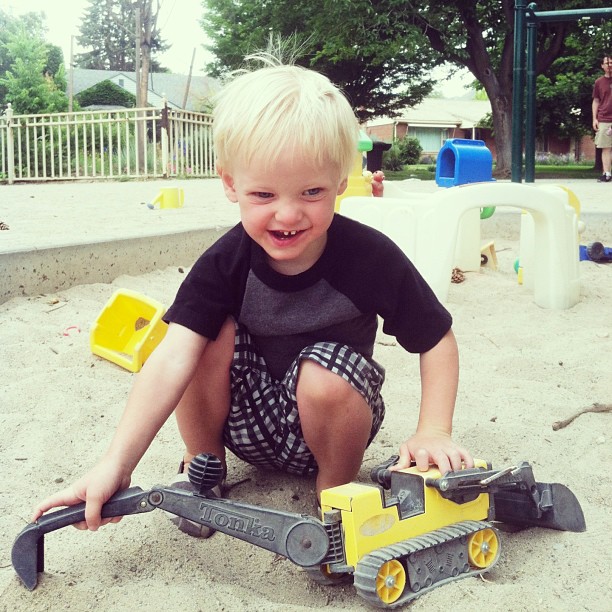 There is a park by our house with lots of dump trucks, diggers, and shovels in the sandbox. Micah asked to go to the "Digger Park" every single day that we were in California and Nevada. He asked about the digger park more than he asked about the return of his father!
Grey likes diggers, but doesn't see what the big deal is. He likes to see them and point them out, he likes to play with toy-diggers, but he doesn't care as much as Micah.

Grey is a little better at figuring out how to construct sentences and use words together than Micah. But Micah is quick to repeat everything his brother says, and add "Too" at the end.
So if Grey says, "Mama, watch me!"
Micah says, "Watch me, too!"
And if Grey says, "I hear it, the garbage truck!"
Micah chimes in, "I hear it, the garbage truck, too!"
It's funniest though, when Micah just wants to be acknowledged for the same thing, but the sentence doesn't quite make sense.
When watching Lion King, Grey said "Daddy Lion Fall!"
And Micah said "Daddy Lion Fall, too!"
Or when Grey asks, "Where Daddy?"
Micah asks,"Where Daddy, too?" 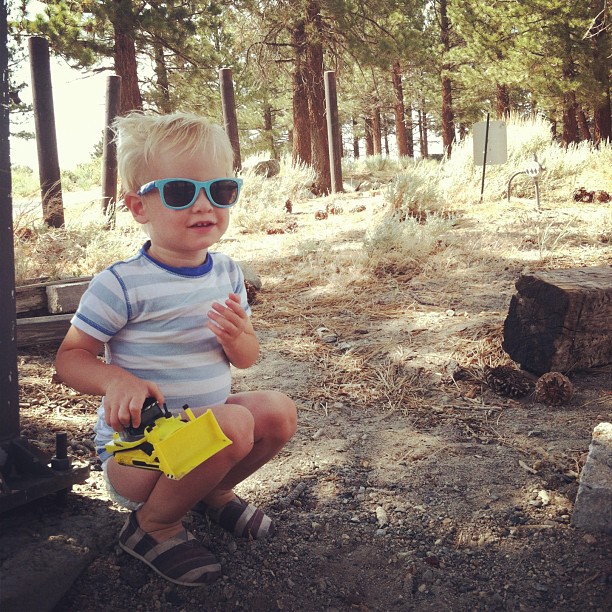 They've also gotten really bossy. My favorite of their commands regard where they want me or their brother to be. They yell, "Hey, get BACK HERE!" (Wonder where they heard that line?)
And "Stay there, Brother!" Or, my favorite: "Get back in house, NOW!"
Um, okay. Who made you the king?

A few days ago, Micah threw a toy and was in time-out. A few minutes later, I crouched down and said, "Micah, you cannot throw your toys," and over my shoulder Grey said,
"Didah, not tro toys."
"Go away, Grey," I said. "You're not responsible for your brother."
I turned back to Micah, "Okay?"
After a moments pause, Grey said, "Otay, Didah? No tro?"
Ug, little boy. He thinks he's the mama.

Right now, as I ignore them and write this post, they're trying to turn on a movie.
Grey was using the Wiimote to try to start a DVD.

"We watching moody, Mom," said Micah.
"Sure, if you can get it to work," I said. (Thinking that they couldn't figure it out.)
Grey turned and gave me a squinty eye, then ran to the DVD player and pushed a button.
"Ha, Mom! Ha! I did it!"
But the DVD ejected.
Grey didn't notice until he'd already returned to the couch.
"Argh!" He grumbled and climbed off the couch, "I do it, Didah. Wait."
"Mama do it, now," said Micah (Didah).
"No, Grey do it, otay?"
"Mama do it, moody."
"Grey do it, moody! Ha! I did it! Watch me, Mom! I did it! "
If you're wondering what movie they're watching, Micah calls it "Rotting Tood" and Grey calls it, "Bodding Hoob!"
(Figure it out?)
I should take them outside and play. But my house is messy, it's like 100 degrees out, and I did say they could watch it if they turned it on themselves...