Well, my friends, it's a boy.
Another boy.
After I texted some friends and family yesterday, my favorite response was from Lana who said, "You'll make a much cuter Mrs. Weasley."
Three boys in three years is a pretty good start. My grandma also had five boys and no girls, sometimes I think that's my future. Other times, I feel quite sure I've got a girl waiting for me. Someday.

But it doesn't matter! What matters now is: I've got a boy coming! And I'm pretty excited. 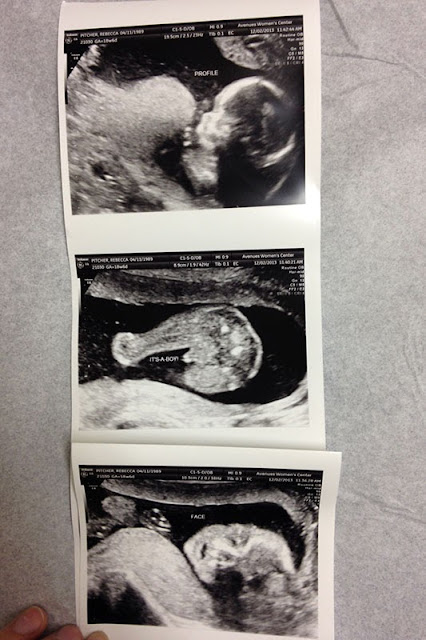 I wonder if he'll be like his brothers. We got a glimpse of him in the ultrasound yesterday and he looked different than his brothers ever looked (we saw the twins via ultrasound a lot).  But we did get such a cute view of his little nose and lips moving and gulping at one point and they looked just like my first sight of the boys' little mouths.
And in that amazing picture of his face (which I can't stop staring at), he's got such a pointed little chin! Like his brothers!
After the technician had checked the heartbeat and length of bones, width of head, etc, she said, "Well, let's get down to business," and she wiggled that doppler around a little, giving us an immediate and obvious insight into our baby's gender. I gasped, "I knew it," I said. "I was right!"
"Wow," said the tech. "He is not keeping that a secret."

This little man is measuring really big for how far along I am, which the boys never did (obviously). I can't stop comparing him and this pregnancy to my first boys and my first pregnancy.
Speaking of my boys, they haven't really "reacted" as people keep hoping.
In fact, I don't think they really know or care that we have new information concerning their sibling to be.
They still love to talk about the baby, and rub my belly (and their own). But when I said, "It's another brother!" Micah said, "No, I'm the brother."
They couldn't really see that the ultrasound was a picture of the baby, but they really liked to hear the heartbeat and would gasp and cry out, "There's my baby's heart! I can hear my baby!" every time the doctor let us listen. She even let the boys take turns holding the doppler, which was exceptionally exciting for them.

Now I guess Travis and I get to talk about baby names for real. I love to think and plan for names, and he hates it.
And we can never, ever agree on any names- especially for boys! He knows that I get annoyed with him when he shoots down every name, so to make things easier on me, I think he's started half-heartedly agreeing with names. But it's backfiring! Since he never agrees with anything, as soon as he says, "Oh yeah, that's okay."
I'm like, "THIS IS OUR BABY'S NAME. NEITHER OF US HATE IT!"
So people ask,  and I'll say, "Well, we both like August," and he's like, "Wait. Stop. Did I say that I like August? That. Um. Is not accurate."

Ah well. Someday this baby will be named. Even if it's not any of the names that I've had my heart set on since high school.

Posted by Becky Pitcher at 8:15 AM

I'm so excited for you. I'm living vicariously through you until I can hopefully have another baby. What are some of the names you like? You should post but make it clear that you want absolutely zero negative comments (because seriously, I hated every person who I told the boys name and they were like, wtf? I wanted to kill them. I felt like they were rejecting my child.)
I like the name Ezra. Its a bit alternative like Micah and Grey but not unusual like... I don't know, Bronx or something. I have lists of names (more names than I'll ever have babies) but most of them are ones that wouldn't really fit with our family. Our boys have senatorial names (as does Douglas Marshall Crabb Jr) and I suppose mine fits (Joanna Leigh Schaeffer-Crabb). So most of the names we have for our own kinda fit the format. How many kids do you want btw? Is that too personal to ask? I've always pictured you with a large family.
ok, this is a long comment now.

much love to you and all your men.

Hurray! It's so exciting to finally know. And I feel your pain on the "picking a name" topic... We have a little boy joining our family in roughly 7 weeks and we are not even close to agreeing on one. It's making me crazy. WHY IS IT SO HARD TO PICK A NAME?