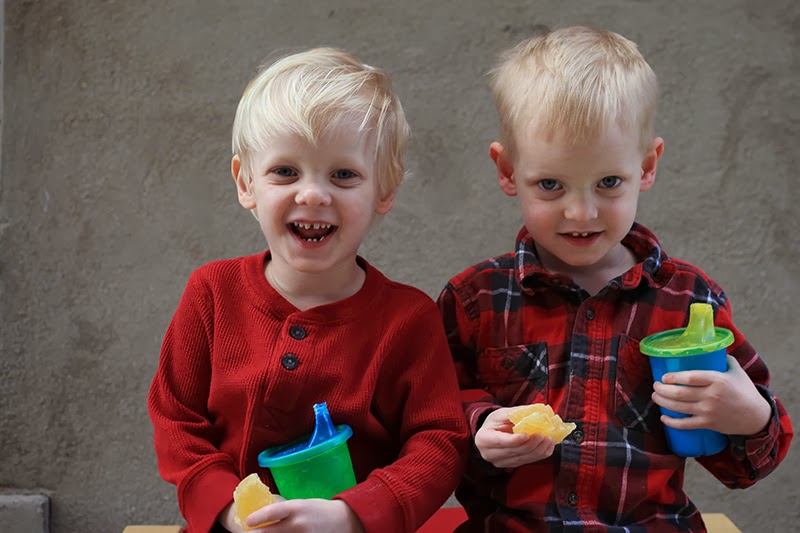 Today is Grey and Micah's third birthday. The idea that I have three year old children is crazy!

Yesterday at the grocery store, a woman said "I was supposed to be a twin, but I don't think my mom could have handled two of me. In fact, I probably couldn't handle a copy of myself."
I felt so affronted that she would suggest that my children were the same- just copies of each other, when they're so different!
They do have many similarities, but they are also such unique individuals!

Grey has always been a little more solemn, more content in whatever situation he's placed in, and more serious. He always asks questions about the world around him. Probably the three most common phrases from his mouth are, "What you doing?" "Why?" And "Right?"
He often describes what he sees or what people are doing (very seriously)
That is a Mommy feeding her baby. Mommies love they babies, right?
We can go on a walk when our dinner is gone, right?
People make houses, but they can't make trees, right?
Grey is very concerned with smaller children and babies, too. Especially if they're upset. He'll rock and sing to an upset baby with a sweet smile on his face the whole time, while Micah starts to panic if the the crying continues.
The other day, as we took a nap together, Grey spent 15 minutes rubbing my back before he finally dozed off. He's so affectionate and quiet, but that quiet strength also makes him very stubborn and determined.
He rarely throws tantrums or screams and cries, but he'll set his jaw and fight until he gets what he wants.
That being said, he's also very silly and funny. He loves to play with his friends, and his stuffed puppy. He is imaginative, but usually daydreams as opposed to talking aloud to himself. On the few occasions when he's been absorbed in his own imaginative play, talking and singing to himself, asking his toys questions and answering them- he doesn't even hear me when I speak to him, he's so engaged with his own thoughts.


Micah, on the other hand, is much sillier. He's constantly reassuring us, "I'm just kidding you," after saying silly or pretend things. While Grey often describes the world around him, Micah loves to describe the world his imagination has cooked up.
Now we're flying, high high high up like Superman. I see an airplane from mine window!
Is baby brother jumping on the bed in your belly?
Or, he repeats things back to me with a few changes. Like if I say, "You can have a small spoonful of frosting after dinner," he'll repeat, "Okay. I can have ALL the big frosting and then dinner. Right?"
He always laughs after he says something funny, and likes to say "It's pretty awesome, huh?" which is a hilarious phrase to hear come out of a toddler's mouth.
He loves to talk to other kids and adults, and often tells me "I love people!" Or "This is my new friend!"
When there's no one to entertain him (or be entertained by him) he speaks to himself, in many different voices. Asking himself silly questions, and marching his fingers around the house and letting toys speak for him when he's asked a question.
He loves action figures and holds long silly conversations between them- but isn't as attached to a single toy, or stuffed animal.
I often find Micah in the throes of hysterical giggles or complete grief. He is rarely content to just be, but instead feels everything deeply and intensely. He throws long screaming tantrums over nothing- like his graham crackers breaking or being buckled into his car seat by me instead of Travis. But he is also much more excited by things, like balloons or special rocks, or getting to eat chocolate cake.
Micah gets distracted easily, and wants to be everywhere and doing everything at once.
He is extremely cuddly, and always wants to be carried, snuggled or have his back rubbed. He gives me lots of hugs and kisses throughout the day and constantly requests, "Stay with me! Don't leave me!" 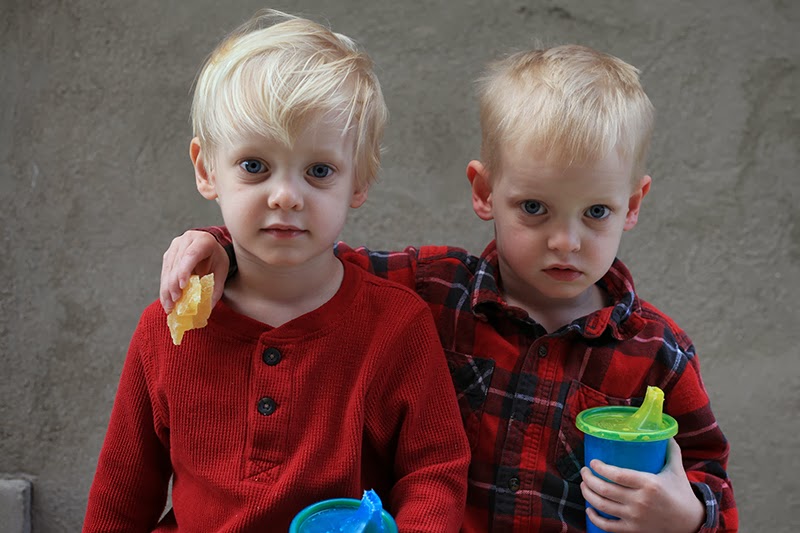 Both boys are really good helpers, but they have specific chores they're interested in. Micah, for example, is much happier cleaning toys up in his room or gathering puzzle pieces.
Grey likes to wash dishes and scrub things, and will request that he be allowed to clean out the bathroom sink. (Be my guest!)
They both love helping with laundry, and now can load the machine, turn the dial, add the soap and start the washer- almost without help!
They prefer being outside to inside, mainly because they have room to run! Grey especially loves running and will spend a long time just sprinting up and down the sidewalk- unless we're on a walk together, then he will walk holding my hand while Micah runs circles around us- shouting "Chase me! Get me!" and Grey says solemnly, "I'm walking with my Mom."
They're both really coordinated daredevils and will jump, climb, and slide everywhere. They don't like being thrown or spun very much, though- they like to move on their own power.

They love to hear and read stories too, and have really good memory. Grey's current favorite book is Where the Wild Things Are and he can recite it entirely. Micah doesn't like it because "It's a naughty book," which is interesting because you'd think he'd really relate to Max!
Micah's favorite books are the Bearnstein Bears- which are all quite preachy and annoying, mostly about making good choices. I suspect I have a self-righteous child on my hands... he certainly loves to remind me (constantly) about bad things Grey has done recently, while harping on about his own good choices.
As far as naughtiness goes, Grey is probably the naughtier child. If I tell him not to do something, he won't fight - he'll just quietly retreat to his room and disobey me privately. (Like yesterday, after I told Grey he couldn't open a box, I found him ten minutes later- hiding in his bed with a knife and pair of scissors trying to open it.)
While Micah will just scream and flip out that I've denied him something- but won't go on to do what I've told him not to.
(Like if I tell him he can't eat the fruit snacks he found, he'll throw them them on the ground and scream and cry, but won't shove them all quickly into his mouth before I can take them- like Grey would.)

As far as potty-training goes, both boys are 100% potty trained, even at night. They rarely get up to pee after they've gone to sleep, but they wake up if they need to instead of wetting the bed.
We are back on naps, but the recent break from them actually helped us a ton. Now the boys usually nap for about an hour a day, and sleep from 8:30 at night to 7 in the morning.

The boys are really obediant, especially if they're warned about what's expected of them. We got them a bunk bed for their birthday and for a while before we got it, we'd say "When we get the bunk bed, Grey will sleep on top and Micah will sleep on the bottom." Since getting it, we've had no problems. They each immediately claimed their own space and haven't fought over it. Likewise, if they're watching a show, I can say "We're going to turn it off when this episode ends," and they'll happily jump up and turn it off when it's over. But if I don't warn them ahead of time, and just turn off the tv when an episode ends - they will flip out!
Today at the doctor, I realized what a difference it makes to prepare them for what's coming. I told them we were going to the doctor, but didn't explain that it was an appointment for them and not me. When we got there, they were ready to hear the baby's heartbeat- but when I asked them to let the doctor listen to their hearts, they panicked. They both started crying and begging to leave, even though it was such a simple, non-painful thing.
But afterward, when the doctor realized they were each missing a shot, and left to get a nurse, I was able to explain, "When the nurse comes, she'll give you each a shot. Then you will get a bandaid, and if you're very good, I will give you a treat in the car."
That time, when the nurse came in, they both happily climbed up on to the table, got their shots without crying, accepted their bandaids and said, "I was so good, I get candy and a sticker!"
Uh. Yeah you do. You get an award for best kids ever.

The boys are both so silly, engaging, and curious. They love to play with their friends, but they especially love playing with adults- like their aunts and uncles and Daddy.
Whenever they're apart from each other, even in separate rooms, they'll ask, "Where's Micah?" "Is Grey alright?" because they're so used to always being together. I love it and hope they'll be best friends forever.
Mostly because it lends to such cute pictures. 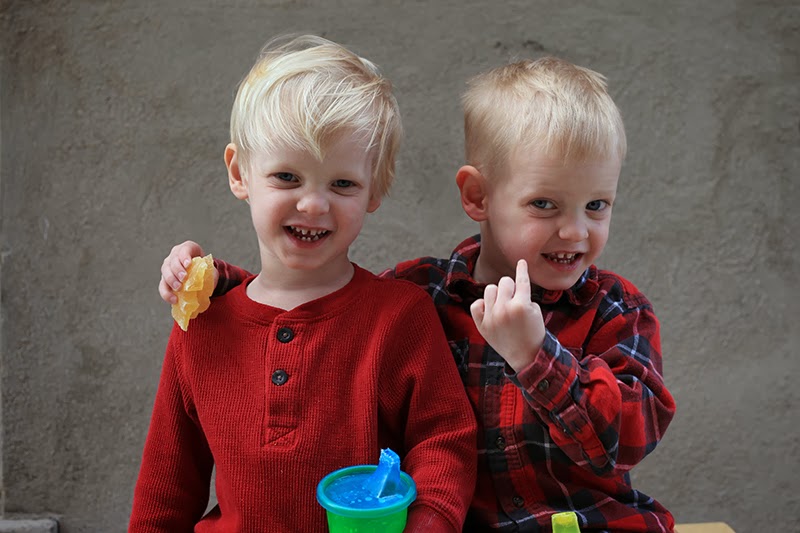 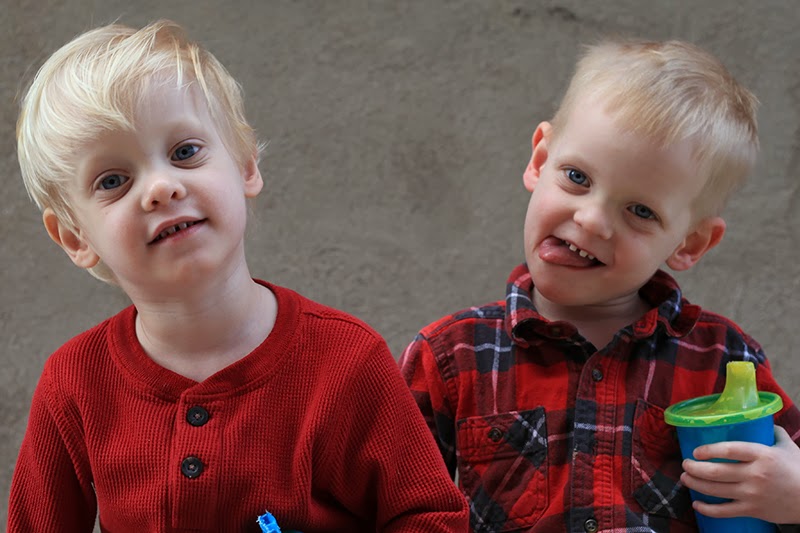 Happy Tuesday and (as Grey and Micah have been saying every time they've been wished well today): Happy Birthday to you, too!