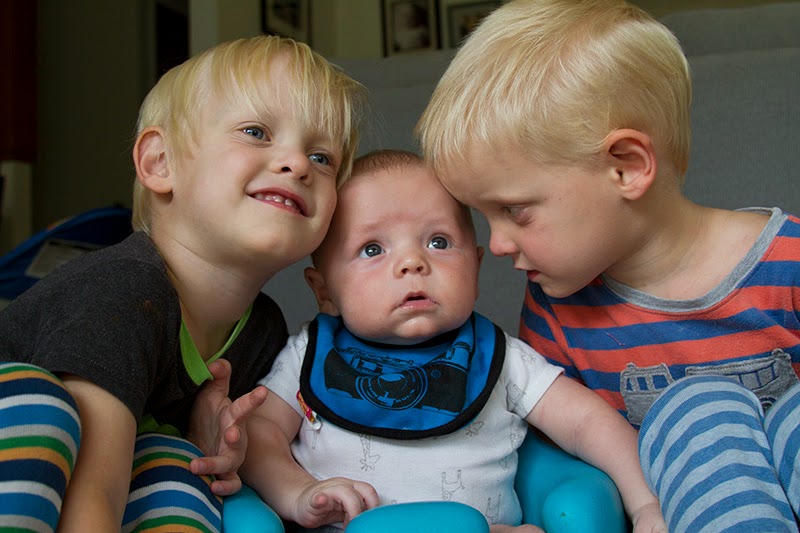 I feel hesitant admitting that it's important to me to be well-dressed.
Especially since I obviously am not always well dressed, and spend a lot of time (as all mothers do, I think) in a t-shirt and jeans or yoga pants.
But generally I like to look good. And even more, I like my kids to look good. I like to dress them up adorably like fashionable little dolls. Skinny jeans. Kids' Toms. Wittle baby cardigans.
I love it all.
And in contemplating this post, I think there are many reasons for this besides just the vain and shallow reasons. For example, I take pictures all day long, I print them and hang them up, I work them into blog posts and photo albums. And if I am spending the time, effort, and money- I don't want my kids wearing Sponge Bob shirts.
I also kind of dress them in defense of myself. To prove, perhaps, that I am capable of being a mother to three young kids. They may not know their letters, but they're not living in squalor, either. They are cared for and loved, they are dressed semi-well.

But I don't always have the time, energy, or clean-clothing-supply to get my kids into coordinating, layered outfits of supreme adorableness. Plus, in the summer- all a kid needs is a t-shirt and a pair of shorts. So half the time, my kids look really, really cute.
And half the time- they dress themselves.

Once upon a time, I said things like "If you only buy clothes that you like, your kids will have to get dressed in them- so they'll look cute, even if they pick out their own clothes."
But obviously, that didn't take into account the clothes that you accumulate without loving. Hand me downs, gifts, pajamas, sweat pants, clothes from the closet that are too big or too small.
And I didn't take into account the stupid way that my kids insist on dressing themselves. Clothes and shoes on backwards, inside out, on the wrong feet. Pajamas in the day, and backwards suspenders.

I want to foster their independence so they do things themselves, as well as encourage them in things that they like. So unless we are going somewhere, or they are wearing the same clothes for the third day in a row (it's hard to get their favorite shirts off of them), I let them dress themselves and look stupid.
And also, they hate when I brush their hair and I don't care enough to fight them if they're already wearing American flag shirts.

So the point of this story is this: sometimes when I'm out with the boys and they look unkept, I am really embarrassed.
I know it's silly. I know that it's a flaw in myself that appearances are so important. But lately, I've had a few good reminders that it doesn't matter.

One was today, as the boys and I left on a walk. I was cringing as I watched them run up the sidewalk ahead of me. Grey was wearing a too-big shirt that was inside out and backwards and fell to his knees, backwards sweatpants that were too short, and shoes on the wrong feet.
When I said, "Grey, your shirt is on backwards and your shoes are on the wrong feet," he delightedly told me, "I love them all backwards!"
Micah was wearing a very stained shirt (backwards) tucked into soccer shorts (also backwards), and sporting a huge tangled rats' nest in his hair.

We walked by our neighbor's house, where there were several men working outside rebuilding the patio.
"Mom! Who is that? What are they doing?" Micah yelled, stopping to look.
One of the men, Grandfatherly looking, turned to them and said, "Do you want to see what we're doing? Come see this!" He showed them how he used the stud gun, and then pointed out one of the young men scraping paint off a pillar near him. He was muscular, heavily tattooed, and young- probably younger than me- and would have intimidated me if he wasn't beaming at us all.
"These your babies?" he asked. "Congratulations. What a happy blessing children are."
I felt... baffled, really.
Not the least because we walk by people and construction-sites regularly and have never been addressed by anyone (and I would probably be nervous if we were.)
But I was reminded what a blessing my kids are. They were laughing and happy. They were engaged and curious about the world around them. They were dressed in clothes that they picked out and loved, even though they were all so stupid.
But the stupidness of their clothes doesn't matter.
They matter.
And I really, really love them.
Even when they look like ragamuffins.

Email ThisBlogThis!Share to TwitterShare to FacebookShare to Pinterest
Labels: boys, essay, motherhood, self

Cute post! That being said, I followed your grandpa cardigan trend for my boy this year (we are in Aus/NZ so opposite seasons) and he got sooo many compliments. Please give us your seasonal tips of what the boys are wearing summer (that you picked out)!

I have been following your blog for a little while now and this is probably my favorite post! Thank you for being vulnerable and real. Thank you for showing the world (at least your readership) what parenting and families are about. And thanks for the tender story of the construction worker guys!

Please keep doing what you are doing!

Ragamuffin is a well used term at our house. My Alice's favorite thing lately is layering socks. Big fuzzy ones. What can you do but admire their individuality and wonder what goes on in their little heads.

Nice blog.I really like your pics you are posting in this blog.And you have done a good work in this blog.Thanks for sharing this information.silks saree