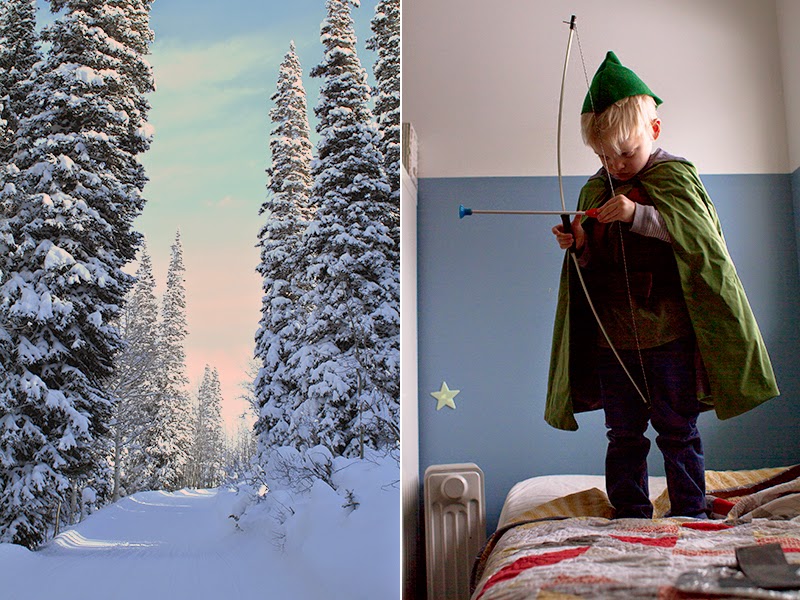 (a friend recently left that quote from The Magician's Nephew on a photo of mine on Instagram, and I've been thinking about it since...)

I love books. I love them so much. Some of my dearest friends are the characters in books, and most of my non-book friends are book-lovers with whom I have bonded over a love of leather bound stories, adventures, and words.
And somehow (unaccountably!) I fell in love with a man who didn't love reading the same way that I do. He does read and enjoy it, but not the same books or with the same interests as me.
When we were dating, I convinced him to read the Harry Potter books. (He was still trying to win me, so I had sway over him!) In the five years since we were married, I've regularly asked him to read the Lord of The Rings. And he's repeatedly refused. Finally, on our last roadtrip (to Arizona over Thanksgiving), I brought The Fellowship of the Ring in my purse and -having him now as a captive audience- I started reading aloud.
It was (obviously) a huge success. And now, we are part-way through The Two Towers. We read it every time we are in the car together. I read it to him while he washes dishes.
And when we watched the Fellowship movie together and he would say, "Huh. Why did they do it this way?" or "I like the way they did that in the book better," my heart was about ready to explode with martial bliss.
I love, love, love books- and the only thing better than reading books to myself, is sharing them with people that I love. 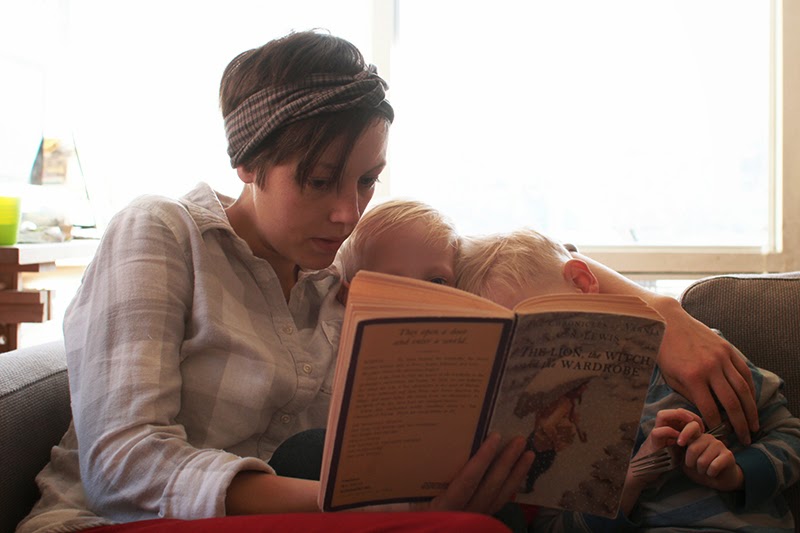 When I was pregnant and the boys were little, Travis would say these little offhand things about books that would send me into panic-attack mode. Things like, "Well, maybe the boys won't like reading that much."
Like they had some sort of choice in the matter! And, not being a boy and not understanding how Travis could dislike reading (maybe it was genetic?), I've always been a bit worried. Maybe they wouldn't like reading. Maybe I would read to them for hours and hours and hours when they were babies and it would have no effect whatsoever.
Maybe they would see me snuggled up on the couch, curled around a novel with silent tears pouring down my face (not an uncommon sight) and they wouldn't even feel curious as to why I was quietly sobbing over a collection of yellowed paper.
Maybe their tendency for tearing up Dr. Suess books and eating them wasn't a babyish desire to destruct and explore, but actually a deep-seated hatred for poetry.
And then, I had them. And they were wild and busy and hyper. And they couldn't sit still and listen to me read The BFG when they were 18 months old. And they wanted to look at pictures, and didn't care for books that described what kind of food pioneers ate, and they were normal little boys.
But they loved books.
They loved comic books about Batman and sound-effect books about diggers, sure. But they loved them.
And then they started to love books about Robin Hood and knights. They were interested in books about why volcanos explode. They picked out Fantastic Mr. Fox off the book shelf and then let me read it to them, even though there weren't any pictures.
And I realized that it was okay that the little girl downstairs is the same age and has listened rapturously to Alice in Wonderland and all the Chronicles of Narnia when my kids could barely handle multiple Frog and Toad books in a row.
Because the thickness of the books they love isn't any sort of proof about their intelligence. I'm an adult, and my favorite book is The Secret Garden.
And on New Year's Eve the boys and I picked The Lion, The Witch, and The Wardrobe off of their very-crowded bookshelves. And they were so engrossed and excited, and when Edmund saw the queen ride up in her sleigh, Micah cried, "Oh no! Is it really the White Witch?" and Grey said, "Did she kill Lucy?" and I realized that they were paying attention and loving it.
And they said those beautiful words that I love to hear more than almost any words I've ever heard, "Please, Mom! Just one more chapter!"

And at bed after they each get to pick out a book, Grey usually requests, "Now read us some poems!" and we pull out Shel Silverstein, Roald Dahl, or Robert Louis Stevenson and they listen raptly and (I'm sure) don't take in any of the meaning, but the rhythm of the words. And it is probably just a bedtime-stalling-tactic, but I'll take it.

Now, every time that we are in the car (to my sometimes annoyance) the boys beg, "Tell us a story!" and they request Fairy Tales (Hansel and Gretel! Little Red Riding Hood!) or they ask for another story of their favorite character, (Robin Hood! Sam the Hobbit! Daddy, when he was little like us!)
It's everything I hoped it would be.
Even if sometimes we read a chapter of The Lion, the Witch, and the Wardrobe and Grey says, "Can we watch this movie?"
"This isn't a movie, it's a book."
"I know. But isn't there a movie about it?"
"Hmm. I don't think so. Sorry about that, guess we'll just have to read it if we want to find out what happens to Lucy and Mr. Tumnus. "

(We all agreed at parenting class that white-lies for their own good are okay, right?)

And I have a house full of books, and tiny book people to match. (Now I just need some book-scented candles and we're good to go!)

Becky I love this post! My husband's about the same, and I hope I do as well telling my kids all these stories I love as you do.

Wonderful photo of you book lovers! I loved when my children discovered books. Mostly it was your mom, and now you are passing it along!

I love this blog post! My son just turned three and he loves me to read to him from chapter books before his naps. We are currently reading Missing May.
I'm thinking The Lion, The Witch, and the Wardrobe will be next.
Love the photo too!