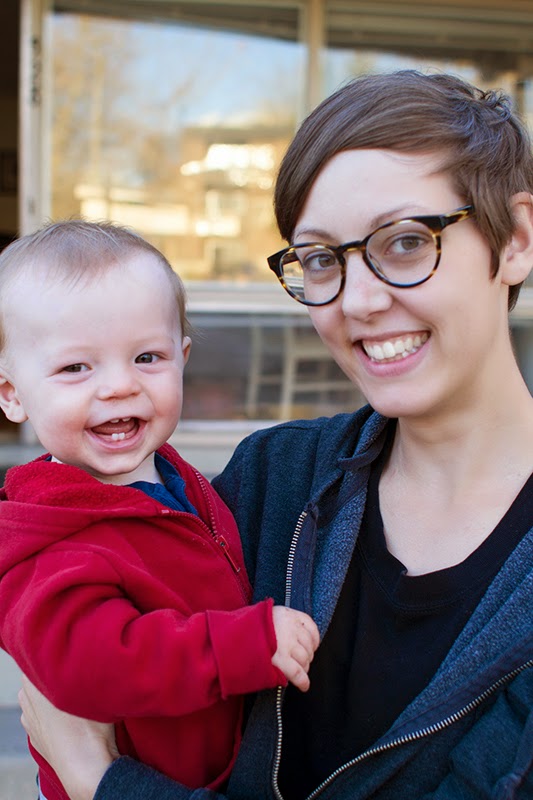 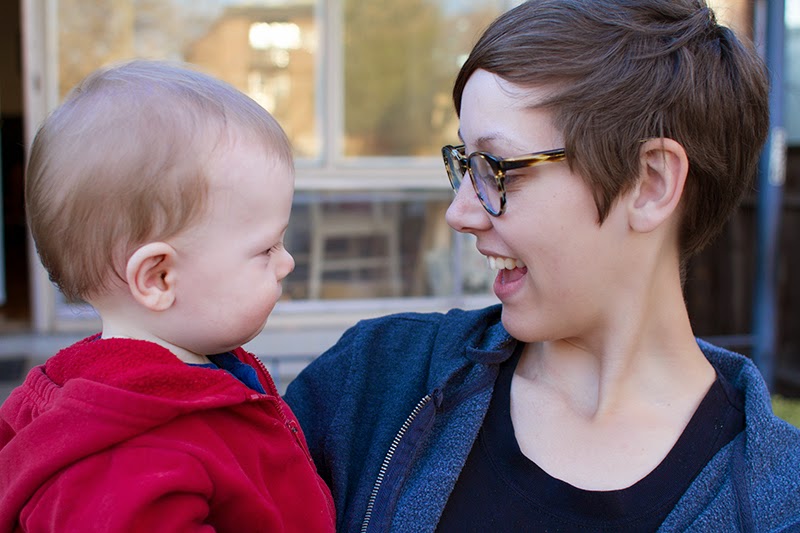 Over the weekend, Travis and I attended a wedding reception. There were only a few other kids there- all about Grey and Micah's age.
Obviously Grey and Micah were the stars of the dance floor, and August (aka: world's most pleasant baby) was watched from afar by a few different people. One of the women who made her way over to say hello had a little girl trailing behind her.  She was four years old and "loved babies."

The little girl played with August while the mom and I made small talk.
Throughout our conversation, the mom was constantly glancing (with that slightly panicked look in her eyes) at all my boys.
Grey and Micah would fall hard to the ground while doing their "very pretty dance" (ie spinning) and she would gasp and run to them. I ignored them.
They got up and kept moving.

August would put his toy in his mouth and she would reach down and pull it out.
I handed him a piece of bread, which he set down on the floor and then picked up to eat again and she audibly gasped.
She could tell that I was looking at him but doing nothing about this floor food, so after a moment (obviously unable to stop herself), she said "He really shouldn't be eating that, should he?"
"Ah, he's alright," I said.

At the time, I thought her panic about my parenting was kind of funny.

Another time, after the mom and I had moved into other circles to talk, I watched August crawl across the room. He was headed towards the stairs- but he has lately mastered going up and down and I was only a few feet away.
"Grey!" I called, "Go follow August so he doesn't fall."
Grey hurried over and sat on the top step of the down stairs, blocking August's path. August neared the stairs and slowed down to happily talk to his big brother, about a foot from the first step down.
From across the room, I heard a scream. (An actual scream!) and the other mom came sprinting across the room and snatched up August.
She stared around the room, looking for me. Finally she bustled over and handed me my baby (who, by the way, I had been watching the whole time.)
"I saved him from the stairs," she gasped. The friend she had been talking to before saving my baby rushed over, too.
"Oh my goodness," she panted. "It's a good thing you have such fast reflexes! You saved that baby's life!"
And both women glared at me, probably furious that I was such a negligent mother (pretty sure Micah was raiding the snack table unsupervised at this time), and awaiting my tearful display of gratitude.

Instead, I took my baby back. Set him down on the floor, and turned to smile at Grey as he ran up with a request to go outside.
When I turned back to the mom to thank her for her help, she was completely dismayed (and August had already crawled a few feet away again.)

We left a few minutes later, as I couldn't stand being watched like a hawk by another woman- desperate to correctly protect my children.
On the ride home, I found that her panic over my mothering style wasn't actually hilarious anymore. It was annoying and upsetting.
And then my annoyance turned to guilt and doubt.
Maybe I was an awful mom.

I should have been there. I should have stopped August long before he reached the stairs. I should never let him put toys in his mouth! And he definitely shouldn't be allowed to eat food that could have germs on it. Food that had touched the ground! And August's hands had been all over the ground! I should pull over and pull out some disinfectant before he stuck his fingers in his mouth.
Too bad I don't have disinfectant in my bag.
What kind of mother has literally never owned disinfectant?!

I don't often have bouts of panic about my ability to mother, since I've been blessed with self-esteem that my husband calls "delusional."

But the days following that wedding I felt really insecure. Maybe I do give my kids too much freedom. (I'm sure many of you reading this agree.)
I mean, really. Kids are stupid. Kids are gross. Kids are too brave.

Outside church the next day, my kids scrambled up the side of a tree to its higher branches. Another dad stood by me and watched his son climb, too.
"I wonder what it is about climbing trees," he said. "I used to love it. It was the best thing ever to be high in a tree."
"I worry about them being up over my head. I mean, I couldn't catch them if they fell," I said.
"Well," he shrugged. "Kids need to climb trees. It's worth the risk. They wouldn't die if they fell."

I want to say, "And he's right. It's worth it. I should let my kids climb trees."

But I need to clarify. It's not right to let kids climb trees. It's alright.
It is right for me to decide how to best protect and watch my kids.
I am not overprotective. That's true.
But I'm not negligent either.
I'm right in the middle. What's the word that means a mother is "protective and watchful, but allows experiences and occasional (but small) harm to come upon her children as learning experiences"?
That's who I think I am. Too bad Websters only has words for poor Mothering, and not competent Mothering.

And I'm trying to remember that I'm a good mom, despite what other people might think. And the way that I allow my kids to experience and learn is the reason my ten month old can climb on and off the couch and up and down stairs. It's the reason my four year olds can climb trees and use knives.
And though we've had a few cuts and bruises- we've yet to break any bones or kill any children.
So I'll take that as a win, thank you very much.

And I don't think that the way that I'm parenting is right, or that the way the other mother parents is wrong.
But I think they're both alright. And we can give ourselves the benefit of the doubt.
Stairs and germs never killed anyone....

(Okay. They both have. Almost definitely.) 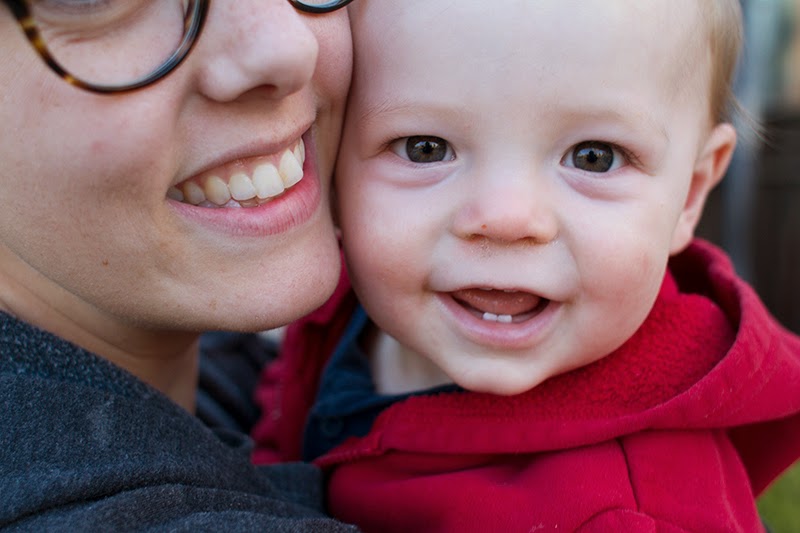 you know they say the reason kids are alergic to so many thing is bacause they mothers never let them get dirty!!!

I have some moms in my MOPS group who have done the same thing to me. And I have to remind myself that they only have one child right now to hover over.... They feel like kids sharing a room, let alone of the opposite sex is a moral crime. As a friend of mine who is a nurse says, "God looks after the kids and the drunks". But I totally know the feelings you went through. And to think, I had WAY too much freedom and risk taking as a kid compared to my own lol!

oh my gosh, that mom, ugh. I kinda wish I could hand some sort of pamphlet to those moms, that says "I was watching, I was aware, I was waiting, I know their capabilities and my children (for the most part) also know their capabilities so just don't worry about it. These are not your children you do not have to watch them, go have fun!" I tend to watch and wait more than rush in and really strongly believe that to learn limits kids have to experience things on their own. Also my kids eat floor food too. I am so sorry that mom was sooo over the top and I kind of hate that she walked away thinking she saved your kid. You are a smart cookie as evident by your blog, you got this!

the way you and Travis are raising your kids, they will be confident, healthy, helpful, self-suficient and many other very good qualities. After one of my sisters-in-law actually took her child to a doctor for eating a little dirt, she was told that most children, before the age of 10, will consume a bushel of dirt. He told her it will not hurt them. Don't worry about what other people think of your parenting skills - YOU DO A WONDERFUL JOB.

I don't have any kids yet, but I love to read your blog and get an idea of what life might be like when I do have my own someday. And from my inexperienced point of view, you're doing a really, really great job raising your cute boys!

Not to be contradictory, but didn't one of the boys have a broken clavicle?

We are very reserved about that can break bones or cause other orthopaedic injuries because Sam seems so many terrible things that can happen to kids from seemingly innocent things. You and he have exactly opposite perspectives, and I would naturally fall between you guys. There are a lot of things that I would let the boys do that Sam is vehemently against. They are forbidden to ever ride razor scooters, for instance, and monkey bars are the source of more pediatric orthopaedic injuries than you can imagine, so I'm sure those are also verboten. Also fireworks and snow blowers. ;-)

Ha! I had completely forgotten about the collarbone! But to be fair: he rolled off the couch. So if they're going to break bones any, I say: let them climb trees! But I think we can all agree. No fireworks. I'm not sure about snowblowers, because I'd like my children to be in charge of all snow removal.

Wait. Do sparklers count as fireworks? Sam is right. I am reckless.

Raising hand... I have never owned hand sanitizer before. Haha I love this post! I feel terrible the way I raisemy boys... Not because how I raise them but because other parents judge me for it. I had someone knock on my door to tell me that my 10(!!!) year walked across the street to go to the neighborhood... I was dumbfounded. Since when is that wrong? Heck my 5 year old explores the whole neighborhood and has his own fort in the woods. I like how I raise my boys but I wish I would stop getting dirty looks for it

I meant to say neighborhood playground.

Hey, I'm the crazy stalker who talked to you at the zoo :) I like to think I'm similar to you, but I realize it might be more by situation than personality. I've had 3 kids in 3 years and they can't all have my undivided attention! People judge you for everything these days, it's becoming a little ridiculous.

I just heard? or read? If babies didn't hit the pavement with their heads they would never learn to walk. It seems like that was a line in a song but I don't remember. I've hit my head one to many times.