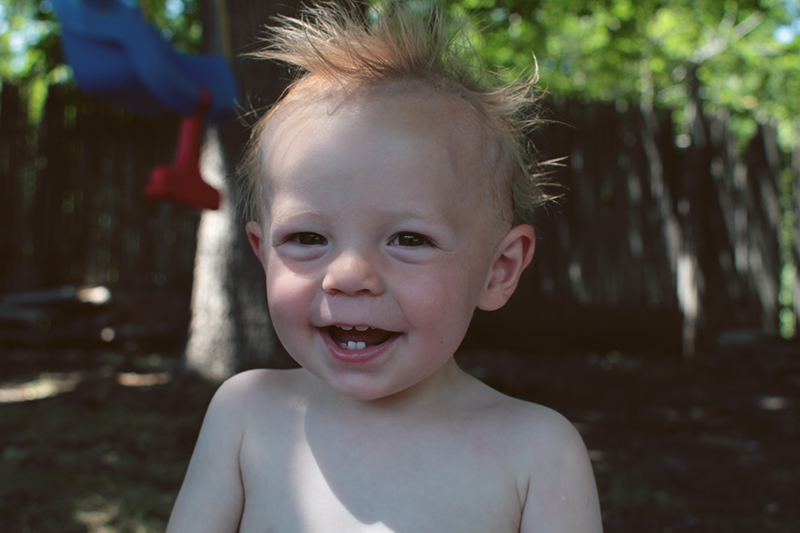 Oh my word, this happy boy is such a delight. Recently, Travis said "I think the word that best describes August is bright." And he is bright in every sense. He is very smart and curious, always trying to figure out how things work or what they're for, always copying everything we do- if he spills his milk, he'll run get a rag to wipe it up, if we brush our teeth, he'll insist that he brush his and wants it wet with toothpaste, just like his brothers. Today for the first time, I laid him in Grey's bed for both his naps instead of in his crib, and both times he laid right down and went to sleep! No whining or crying!
Two things that I am very impressed with (but maybe aren't that impressive, I just know Grey and Micah couldn't do it at this age!) are that he looks wherever we point and that he knows to switch toys to his other hand if he's getting dressed.
Grey and Micah were at least two before they figured out looking where I point, otherwise they would look right at my hand or just stare around aimlessly! August understands pointing!
And when I get him dressed, he switches his toys or cups from the hand that needs to go through a sleeve instead of gripping it tighter and trying to squeeze it through his clothes. 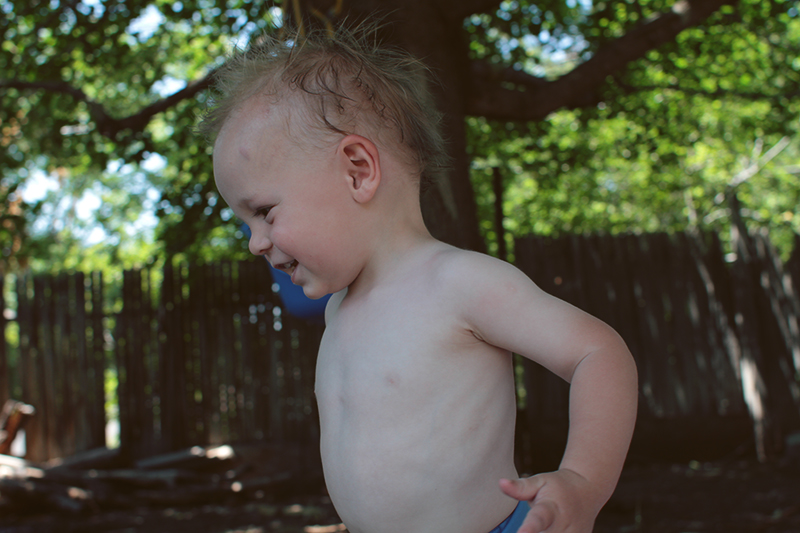 He is very patient if he knows that we are getting him something, and will wait quietly until his turn. For example, if we are driving on a long trip he will start to whine and cry eventually- but the moment we pull over, he stops crying. Travis will get out and fill up the gas tank or something and then get back in, and then August will start to cry again. As long as he thought he was about to get out, he didn't mind waiting. Likewise, our friends recently babysat and took all the kids to get slurpees. August sat patiently waiting in his stroller while each of the other five kids got slurpees. It was only when they turned to leave and he realized that he didn't have a slurpee himself that he became upset.
When he is upset, (like if another child takes a toy of his) he doesn't cry- he sounds an alarm! He starts this panciked whine like a baby siren "Eeeeeeeh Eeeeeeh Eeeeeeeeh!" It's so funny! (And a bit annoying.) 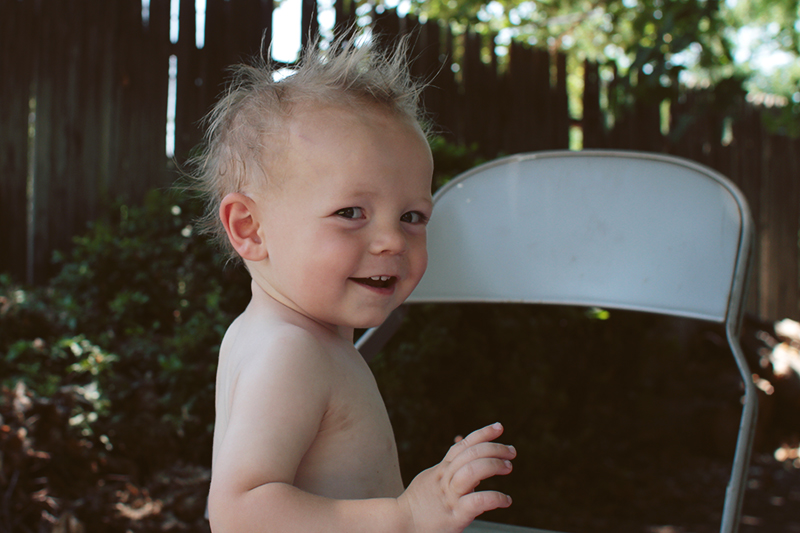 He loves to go outside, and loves to wear his shoes. He has two pairs of shoes and he carries them around all the time. He will actually come running if I say "Let's get on your shoes!" He even says shoes and it so cute. Its more like "Juice/chews" combined than the words shoes, though.
He also says book, truck, dog, duck, mama, Grey, Micah, Dad (or, more often Da) and a handful of animal sounds. I'm not sure if he can actually tell his brothers apart or not, though.
August still takes two naps a day and sleeps from about 7:30pm-6:30am every night. He is now officially and completely off of the breast, and thinks he gets to be out of a high chair, too! He wants to sit at the big table so badly, and play with the big toys, and drink out of big cups. He feeds himself completely with a spoon - very rarely using his fingers if he can use a utensil.
He can climb on to the table now, and will climb up and throw off anything up there, yelling "UH-OH!" each time he tosses a crayon or paper on to the floor. 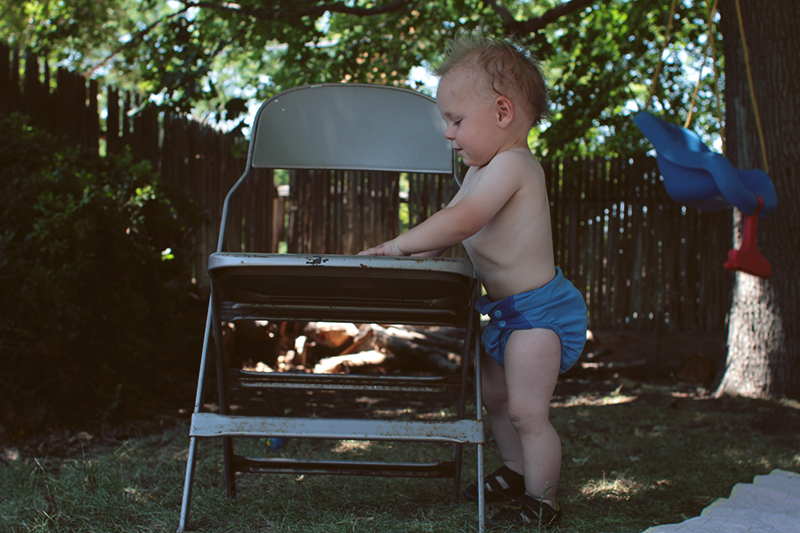 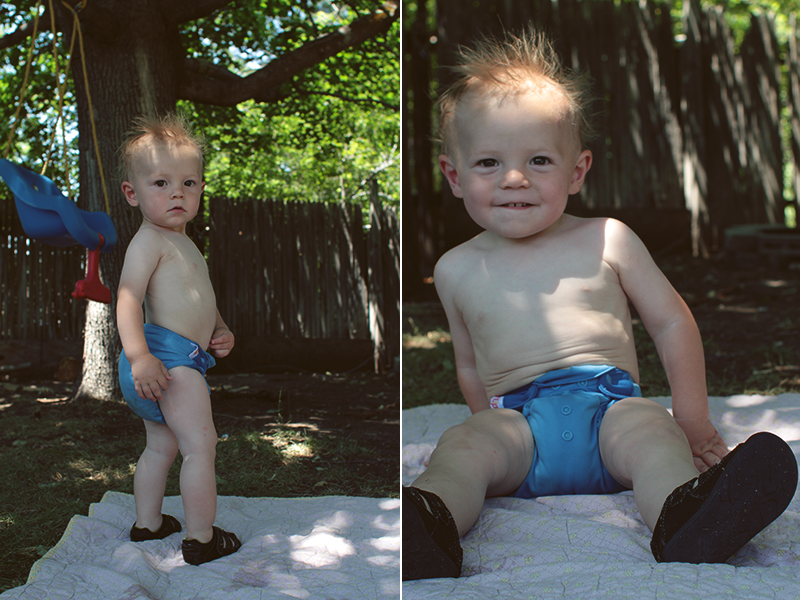 His hair is so crazy in these pictures because Micah had sprayed him with the hose and we "toweled" his head off with his shirt. I think it's so funny and cute when his hair is crazy because it's so fine and his head is so big. He looks like Bill Murray!
Recently I've told several people that he is one, and immediately they press "How many months is he?" No one believes that he is only thirteen (now fourteen months) because he's so tall, his head is so big, and he's so smart and capable. Apparently most other fourteen month olds don't climb the ladders at the park!
This little boy is so sweet and bright that he lights up the whole room when he's in it. I love him so much and am delighted to be his mama. 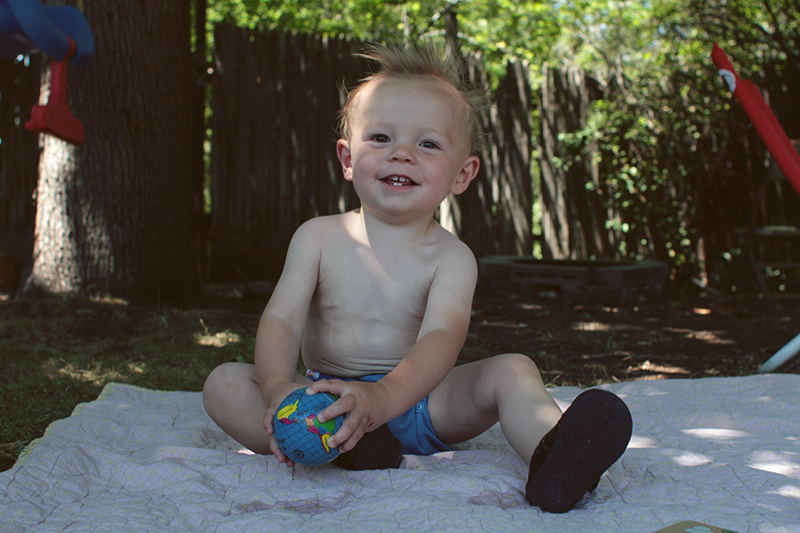 Posted by Becky Pitcher at 2:24 PM

I can't believe how big he is! Cute stuff!

Love the idea of not revealing which twin is "older"—I have never heard this approach before and it makes so much sense to me. Thanks for sharing!

Oops. Just realized I commented on the wrong post above. Sorry!

August, you are really cute :) And I love your name!