The nicest babies in the world had another ultrasound today, and guess what! They're still perfect!

Three weeks ago we had our last ultrasound and Baby A was 2lbs 1oz and today he was 2lbs 12oz, which means he gained 11oz.
Baby B, however, was smaller and weighed only 1lb 14oz last time, but now he's 3lbs exactly! He gained an entire pound and 2oz!
I can't get over it!
(By the way, in case you're counting - that means I have 5lbs 12oz of baby in me. That doesn't include the placenta - which is practically the size of a baby itself- or any amniotic fluid, or anything else.)
The doctor said there's a slight chance they switched places, so Baby B is really Baby A, (?) but they're REALLY crowded in there so it's unlikely.
I was worried that Baby B was hogging up all of Baby A's food, but the doctor said that's not the case and they're both perfect and healthy and perfect and perfect.
And I love them.
He didn't say that last part. I did.
The tech today was much nicer, and even tried to take some pictures of the boys, but they were both face  down. She tried to get a profile of Baby A, but he had both his arms over his face so we ended up with this: 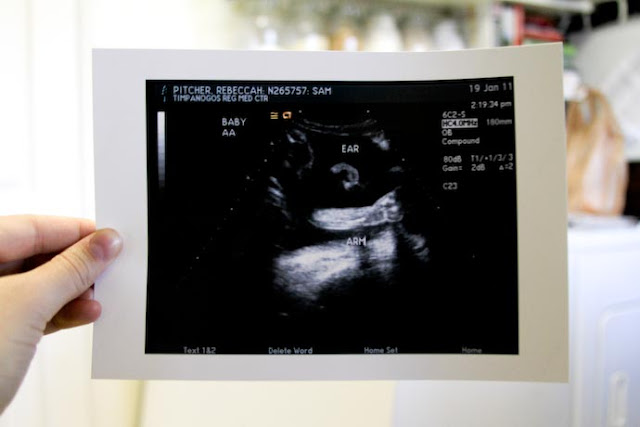 imagine a child lying with his arms over his head counting for hide n' seek.
That's a giant ear, no?
I have been feeling really anxious lately that we would go in for an ultrasound and the doctor would say "Oh Baby A is so much bigger than Baby B, we need to induce you or Baby B will starve to death in utero."
But I asked today and he said it was really, really unlikely and it looked like I would carry the babies (almost) full term, he said "So far you've had a perfect pregnancy. It doesn't look like that will change."
I feel so grateful! I can't believe it.
And I feel so proud of little Baby B, he's getting so big!
Now Baby A will have to play catch up.
And I should help him by eating an entire pan of brownies right now.
Posted by Becky Pitcher at 4:24 PM

I wish I could help your babies by eating a whole pan of brownies.

I think I'll make some brownies too. But not all for me, Uncle Matt is coming for supper. I am soooooo happy to hear both babies are close to or over 3 lbs. Keep feeding!!!!!, but maybe a bit of veggies and fruit and protein might help too. Do I sound like a Mom, well what do you expect, anyway it is good to know all is still going according to plan and those boys will be big and healthy when they arrive. Remember - shoot for St. Patrick's Day at least. Love you, Grandma