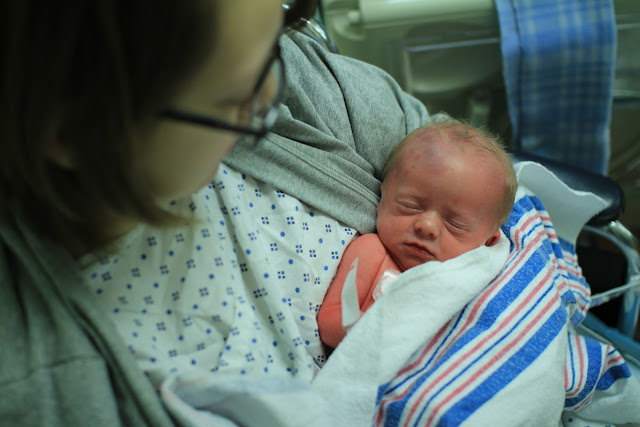 Sadly, I've got time to post right now.
Its sad because if I'm posting on my blog, it means I'm not holding my sons.
I'm not holding my sons because they are in the NICU and I have just woken up and am waiting for some more food.
(I hear lots of women don't want food for a while after they deliver, but I'm freaking STARVING.)

So, I am pleased to announce the birth of two handsome, healthy baby boys:
Grey Christopher Pitcher born on March 4th, 2011 at 4:19am, weighing 5lbs 6oz, 18.5 inches long. Previously known to the world as Pitcher Baby A. 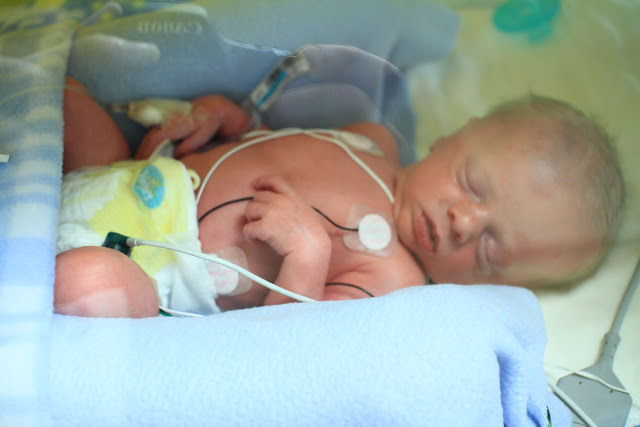 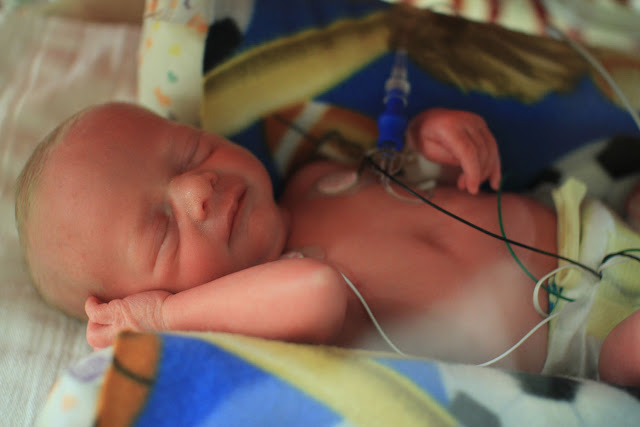 Everyone is doing really well, so don't be deceived by the fact that the babies are in the NICU (Newborn Intensive Care Unit).  They are both breathing on their own very well, and seem to be regulating their temperature pretty well.
But they have them on some fluids, since they're so small, and will keep them in the NICU until they prove that they can eat on their own.

The full birth story will come, but here's the watered-down version:
Last night I was on my hands and knees searching for donuts I knew I had kicked under the bed, when suddenly I was bleeding.
I was bleeding a lot.
So we called the doctor and said "I'm bleeding, we're coming in. Be ready for us."
We grabbed all our things.
And we were out the door in five minutes.

The doctor on call (who, luckily, was one of my favorite doctors) said that the placenta was pulling away from the wall of my uterus and we could wait to see if the bleeding went down while I dilated (I was still only at 1cm dilated and you must be 10 cm to start pushing).
We decided to do that, since I wanted to avoid a C-section if possible.
To make a long story short, the bleeding did not slow.

And I stood to use the bathroom and was suddenly gushing blood everywhere.
The nurses rushed me into the operating room within seconds and I was put under completely so the babies could be delivered within minutes.
Unfortunately neither Travis nor I was able to see them born.
But Travis saw them really soon after, and I was able to see them about 4 hours later, when I was fully awake. I was even able to try to feed them, but they were too sleepy to latch on.

And now, someone is bringing me a hamburger, and I am really excited to eat it.
Check back again soon, but I'm not sure there'll be anything else to see for a while.
Posted by Becky Pitcher at 1:07 PM

Oh my goodness! I don't even ACTUALLY know you, but I know Claire, and Kaylie and all those girls and that's how I found your blog. Your babies look beautiful already! I'm sorry you can't hold them right now, but at least they are healthy.

Oh my heavens! Your babies are ADORABLE!! I wish we knew each other so I could see these handsome guys in person :) congrats on your beautiful babes!

Oh Becky, I'm in tears as I'm reading this. I'm sorry things didn't turn out exactly how you would have liked, but LOOK at your sons! I'm in love. And I don't care if that sounds creepy. I really, really am.

And also, Niki is an old coworker of mine. She's awesome and I wish you knew each other too. :)

And another thing. Your boys sound like they're in the exact same condition that my girls were in. Almost the exact same weight and the similar NICU reasons. Don't worry, they'll rock the NICU like it's no tomorrow and be permanently in your arms in no time. Again, I'm so happy for you. Happy birthday!!!

Like everyone else here :), I don't know you either, but congratulations! It sounds like they are doing very well, and my oh my they are so handsome. Here's to hoping they get out of the NICU soon and into yours and Travis's arms!! (I'm thinking that is a serious benefit to twins...you can each hold one and coo and goo and not have to share :D)

My husband and I are old BYU buddies of Travis' (Hi, Pitcher!) and I've been following your blog for a while. Congratulations on the birth of both your beautiful boys! Sending prayers your family's way that all goes well and they are able to come home to you and Travis soon so your whole family of four can be together. Good job, momma, on making such big, beautiful babies!! You've done a good work! Now you just have to heal up and get all four of you home!

p.s. my husband Lee roomed with Travis for a while at Centennial. now you know who we are. :)

Congrats!! I was not expecting this post that's for sure! I'm sorry things didn't go exactly as you planned! But the boys are absolutely adorable!!!

Becky, Becky, Becky, look what you have done! I hope you are happy. Well, I know you are! And so are we-thrilled is more like it! We love you. Good job!

Congrats! They are too cute. I'm glad they got them out safe and you were okay too.

I live in Utah too! HOw cool is that!!

And I can't wait to meet your really super cute baby boys!!

Get some rest. Love you!

Congratulations to the little (and big) Pitchers! Happy Birthday to your sweet sons. :)

Congratulations mommy! They're adorable...so much hair and great birth weights.

Those are some good lookin' newborns! Way to go and congrats!

Congrats Becky and Travis, your baby boys are so cute. I'm so happy to hear that they are healthy and doing good. The whole NICU story and waiting for the babies to be able to eat on their own was the same story for us. Can't wait to see more pictures. I'm so excited for you guys. Hope you heal well and start feeling yourself. Take it easy.

Becky and Travis,
Congratulations from the Lovejoys! We are all so happy for you and your new family :) The boys are absolutely adorable!
Rob, Kim, Ana and Ally

So happy for you and I don't even know you! I follow Mama and the Dudes (don't know her either) BUT... I'm a twin momma too... so I LOVE finding the blogs of other Mothers of Multiples (MOMs) :)
Congratulations on your BEAUTIFULLY HANDSOME little men!

Hey Girl! I follow Mama & the Dudes and she sent me your way! Congrats!! I am a twin mommy! (Girls, fraternal, 3 1/2 years old) I had a c-section (near emergency) too! I know how hard it is to not being able to hold them right away. I was really bummed about that and having a c-section. My husband tells me that all I did was hang my head and drool on them the first time they brought the babies to me to try and feed them(lol, I have zero memory of any of this!). Everything gets better & easier, I can promise you that! ;) If you ever need anything don't be shy to holler! :)

And many many congratulations and blessings to you & your new family! Having twins is a TOTAL ride, you're gonna have so much fun! :)

So much fun to go and visit the little boys in the hospital! I loved it, I wish I was able to hold them but touching them in the NICU was just as great. Mom sang some songs and we told them a few stories. So cute so adorable

congratulations! they are beautiful and so are you! we're so happy for you and travis (my hubby was his old roommate, also named travis). praying that those babies will be in your arms soon! xoxo

Good work! I think the worst feeling in the world is sitting in the NICU watching your baby you can't hold! And you have it times two! I felt the same way about Nigel. But they're breathing on their own! That's fantastic! I can't wait to keep reading!

Oh my goodness! I am so late! Congratulations on the birth of your handsome little men! They are going to fill your life with so much joy! I am so happy for you guys! They're adorable and I really need to catch up on your blog posts! lol I hope you have a smooth recovery. Take care!

OH MAN! Sorry, I'm so behind on this! We've had the flu at our house so we've been dead to the world for the last week and I finally got back online to check email and check blogs and you have babies! Congrats! They are beautiful. Maybe when they are bigger and we are not sick anymore, we can come and see you guys.